Dreaming of Kamados and BBQ

Ever since seeing that episode of Good Eats in which Alton Brown roasts a chicken in a big flower pot, I’ve been thinking about the magic of cooking in ceramic ovens. The even, radiant heat from ceramics and earthenware is the secret to a lot of yummy roasted foods: tandoori and naan, for example. Or authentic NYC pizza cooked in high-temperature brick-lined ovens (so I’m told…I haven’t tried the real thing yet). How could I get this technology into my own house without building an entire oven? 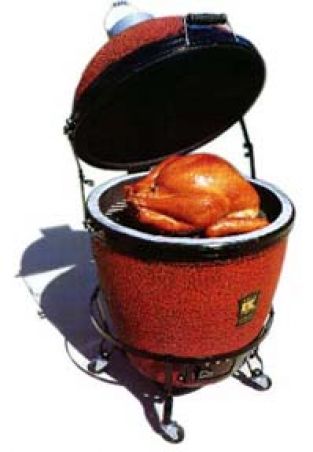 My sister sent me a link to Imperial Kamado, a company that sells a Japanese-style kamado (lit: stove) here in the States. It’s a double-layered earthenware charcoal-fired that looks about 3-4ft high. Apparently it’s great for making succulent barbecue and even turkeys. It looks fairly compact despite its size and weight, compared to the usual full-on serious BBQ smoking rig. Check out the brochure. This isn’t a high-heat solution, but for slow roasting it sounds great.

The site is cluttered with interesting background about the development of the Japanese kitchen. There’s also some interesting material on wikipedia about the historical Japanese kitchen, and how it was impacted by international influences. I didn’t know foods like ramen and sukiyaki were a result of this fusion of Japanese and foreign foods. Shows how much I know.

The entire “kamado scene” seems quite passionate about their cookers. You can find several providers of these cookers online, each of them claiming to be the best. Some are quite decorative—even garish—but their owners pose proudly with them as if they had just seen their firstborn graduate from college. 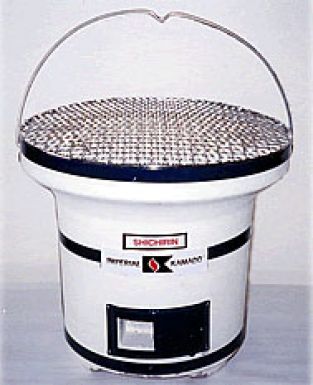 I’m also charmed by this shinchrin, which is a charcoal grill. I have been wanting to get a small hibachi for cooking on the front steps, but mostly I see cheap ones at the supermarket. This one looks cooler, and reminds me of the round grills I’ve seen in Taiwan, with squid and eel roasting over them. That used to gross me out, but after belatedly discovering that unagi is delicious, I’m making up for lost time.