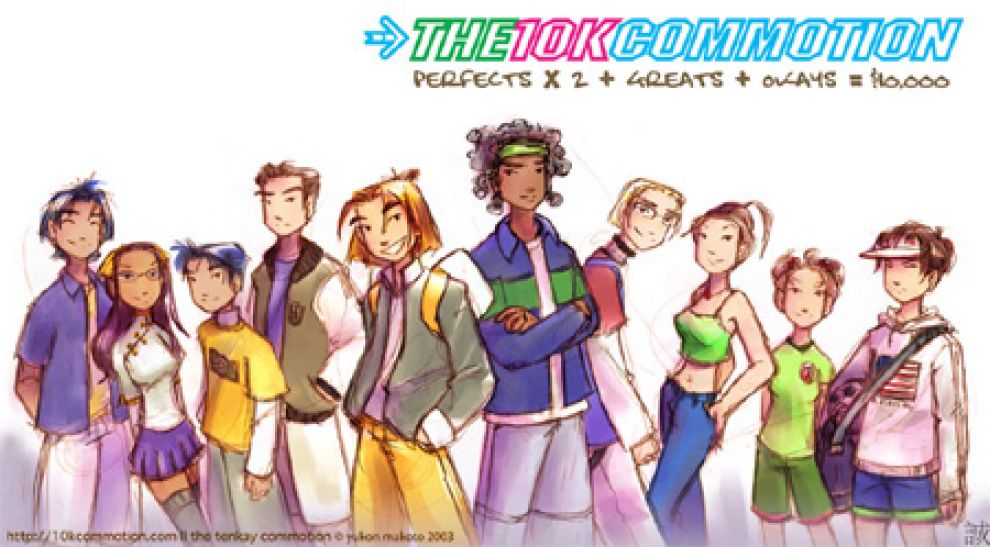 I was browsing Penny Arcade and came upon a link to 10K Commotion, a graphic novel illustrated by artist Yukon Makoto.

So what’s it about? Here’s the fictional backstory:

The 10K Commotion is a Dance Dance Revolution™ Tournament held in Honolulu, Hawaii. Sponsored by the creators of the original game, this promises to be the biggest tournament ever in the USA. Thousands of players will register and hundreds will win prizes ranging from cash & in-store prizes, modeling contracts and music video agent consultations, to endorsement agreements with clothing and merchandise sponsors and prizes from local sponsors.

The watercolory, sketchy style lends itself to the story: a bunch of kids in their late teens / early twenties share a passion for the video game Dance Dance Revolution. They’ve come together from all over the world to compete against each other, but instead of becoming enemies they find comfort in knowing that they are truly among their peers. Flirtation and friendship is inevitable. I can’t think of an analogous comic…maybe it’s a little like those competition manga like Yakitate! Japan, except it takes place in an urban Asian-American anime-influenced college setting in Hawaii. Also, unlike Yakitate! Japan, we never see the actual competition; instead, we see the reactions of the characters to what’s going on. We infer what has happened through the slang that is centered around the game. The theme really seems to be that of relationships, dreams, and being on the cusp of making major life choices.

I also find the depiction of this particular subculture fascinating; having once been in the game industry, I can identify with the vibe though I never did quite live it fully like this. I still miss being among people who just had that vibe about games, games culture, and the desire to kick ass at it.

Some may find the dialog hard to follow, but I’m convinced that the people in this scene talk this way. From that perspective, 10K Commotion is quite believable.

The entire comic is not yet done, but it’s up to the very part. Makoto has another project in the works that I’m looking forward to seeing…she’s one to watch. The combination of writing and artwork create an authentic, compelling whole. Bravo!