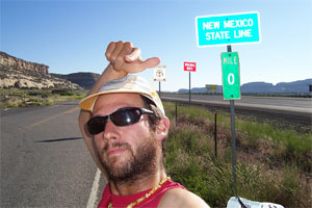 S. passed along this link to some incredibly positive–possibly crazy, but still very cool–guy who’s decided to run across America. He’s the first to admit that it’s not exactly an original idea, but it’s something he wants to do and he’s going to do it, by gum! He writes:

Amen, brother! It’s going to take about 6 months to get from Newport, California to Newport, Rhode Island. He’s around Amarillo, Texas right now, according to his website, Run Willy Run. 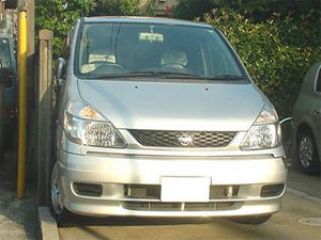 Another find was this link I got from Anne on a mailing list: Extraordinary Ordinary Guy In Japan. He writes about a lot of cultural things in his homeland of Japan from a “regular guy” point of view. When I travel to a new place, I’m struck by how the little things are often different: the style of bathroom fixtures in Asia, for example, or perhaps the seeming inclusion of sausage on every menu in the Midwest, the appearance of “grits” the further south you go in the U.S. Insightful, funny, and interesting. The photo of the car above is part of one his galleries, “How Can They Park Like That?”. He explains:

Japanese people drive so carefully not to get any scratches on their own cars. But we can get only the cramped small parking spaces. So, they perform the feat of parking their car leaving a space of a finger between the wall and the car.

The site is full of stuff like that. It’s great!