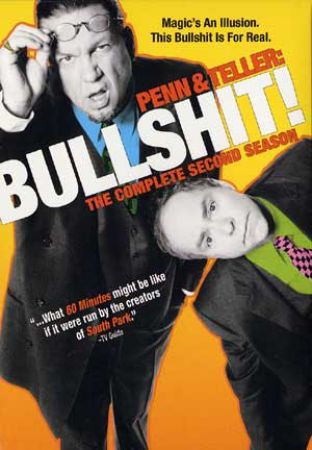 I’m a fan of Penn & Teller’s magic shtick. They’re subversive con artists, but they’re honest about what they’re doing; It’s entertaining and at the same time empowering. When they’re not on stage in Vegas, they’ve got a program on Showtime called Bullshit! which is kind of like a sardonic version of 60 Minutes. In the first season, they’ve debunked mystics, alien abductees, and firewalkers. That’s to be expected. But they’ve also cast a critical eye on entrenched mainstream practice. Chiropractors, smoking bans, environmental activism…they’ve all been examined and laid bare. They challenge what you think you know, exorcising lies from all parts of the political compass. The show isn’t unbiased in its presentation, mind you; I’ve wondered if the producers trumped things up more than was necessary. It’s still great. P&T want us to question and find the truth on our own, not take it for granted because some guy in a suit says so. I just picked up the second season on DVD.

As much as I like P&T, sometimes all that high-minded Libertarian thinking gets in the way of blowing stuff up real good…that’s the strength of the Discovery Channel’s Jamie Hyneman and Adam Savage on Mythbusters. Veterans of the film special effects industry, Hyneman and Savage apply their pragmatic (and loony) approach to science to prove or disprove urban legends. Like, can you get stuck on an airplane toilet seat when you flush, the vacuum of spaaace locked onto your tuckus? Does toast really tend to fall butter side down? Can you beat the Breathalyzer with Tic Tacs? Can you make an assassin’s rifle bullet out of ice? If you toss a penny off the Empire State Building, is it lethal? All those questions and more are addressed every week by the Mythbuster’s crew with boundless energy and good humor. These are the kinds of folk I’d like to hang out with: smart, motivated, and just a little bit crazy.