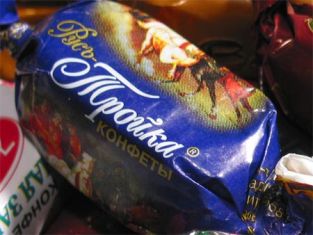 I visited Siberia, a Russian grocery store in downtown Nashua that I’ve driven by dozens of times. Earlier in the week, an acquaintance had mentioned something about Russian cakes, and since I was nearby I thought I would check out the Russian pastry scene. 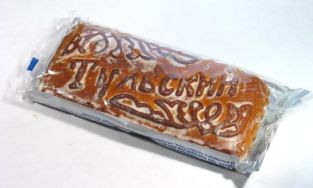 It was a small store, but packed with all sorts of boxes, bottles, and cans with Russian writing all over them. I saw jars of eggplant spread, a collection of museum-quality dried whole fishes, and lots of candy. Some older people browsed the isles, speaking amongst themselves in quiet (I assume) Russian. This is probaby the first time I’ve heard it spoken natively, and I was struck by what an interesting sound it has…kind of brusque with a lyrical edge to it.

I got some of the bulk candy, at $4.99/lb, for Halloween. As I was checking out, the proprietor heartily approved of my selection, and in broken English directed me to some cookies I should try next time I came back. American cookies, she gestured, just did not have the right smell. She also pointed out some of her favorite candies. It was utterly charming. Most of the candies were pretty good…they were a little dusty tasting, but were generally really good. Nothing really bizarre, except for the one that tasted like a chocolate-covered omelette. I have yet to try the pie with writing on it…I half expect to find it’s something that pregnant and nursing women eat. Or given to babies on their first birthday. Or that it’s filled with a hearty blend of minced herring, cabbage, and beets. I can’t tell from the way it smells what’s inside. 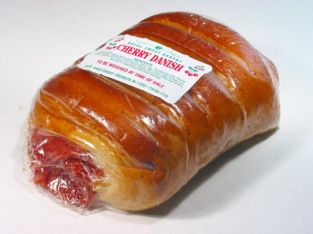 I especially want to try some of the Kvass, which I’m told is a kind of sasparilla / root beer. My sister also mentioned that the sausages are probably really good too.