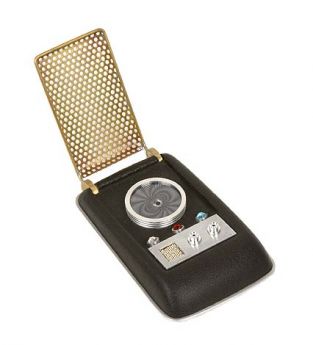 I thought I had outgrown such things, but the tasty goods on Master Replicas’ Site had me salivating. Who wouldn’t want a durable metal Star Trek Communicator (depicted) with built in sound effects? Or their own Star Wars thermal detonator, to help bring negotiations to a tidy conclusion? Some items have interactive simulations too! The short notes on each item are an interesting read also, detailing the origin of the original props and how they were interpreted to create the final replica.

These things aren’t cheap at several hundred dollars a pop, but the reviews on the net seem to hold Master Replica in hard regard. We salute you, Master Replicas!