A few weeks ago I wrote about the Accrual Bucket aspect of my Gathering Model of Productivity (GAMO-P), which is a very personal productivity system I’m designing for this year’s Groundhog Day Resolutions (GHDR). After working with the Accrual Bucket for a couple of weeks, I have some observations I’d like to share! 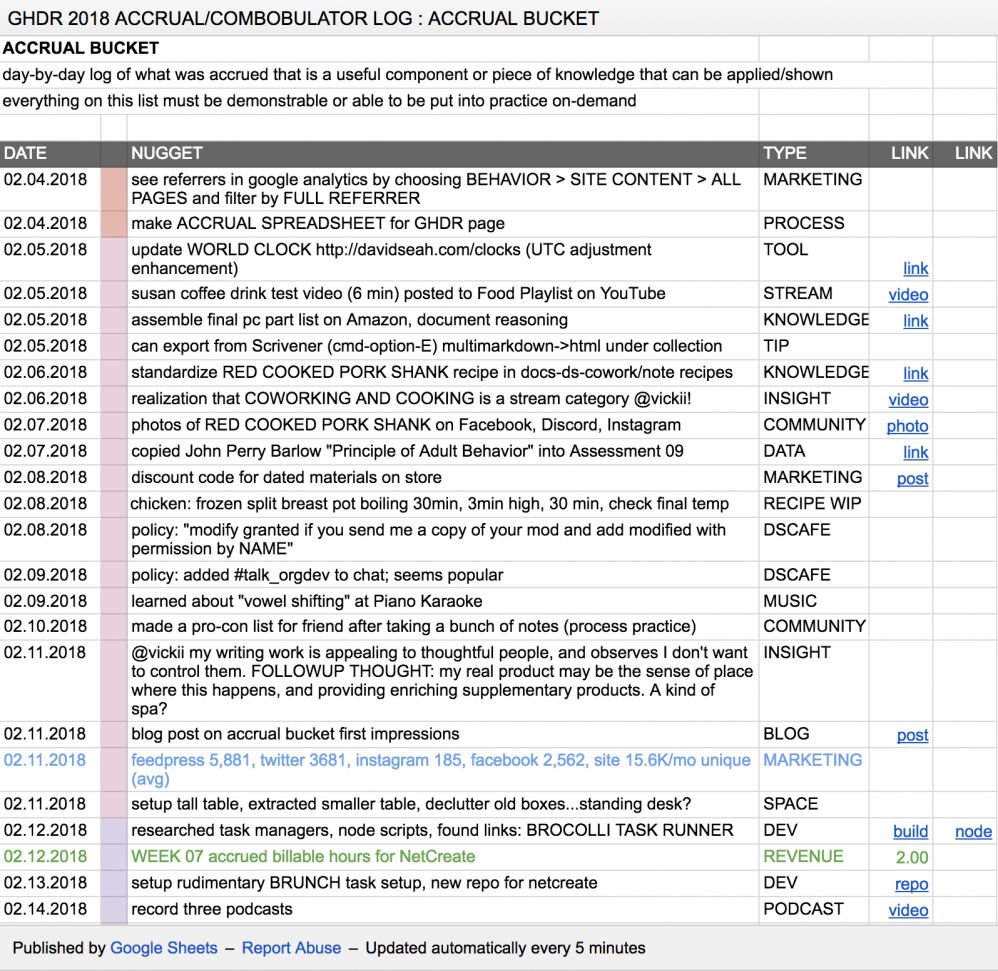 Having an Accrual Bucket does feel good, and it is a nice way to give some sense of purpose to the day. Watching the bucket fill with “fruit” that I can do something with later does give me the feeling that I am productive.

Observation 2 – Too much stuff?

However, as time goes on I’ve become aware of the “low quality of gathered fruit” that is accumulating and this is creating a feeling of disquiet. While it is good to know that I’m doing something approximately every day, I feel like these are consolation prizes without meaning, and they almost feel like a backlog less-than-great stuff that I have to deal with later. This is my impatience transmuting into negativity, however, so I have to take that into account.

Observation 3 – Making the finished pieces is still to come!

The accrual bucket is not the ONLY system in GAMOP for good reason: the gathered fruit has to be processed into market-ready goods to be shared or sold to a busy public. I’ve been thinking of this second stage as the Product Combobulator, which takes that which is in the bucket and turns it into something “finished” that is ready for the general public.

I’ve noticed over the past several weeks while I have been doing my gathering, I’ve been forgetting to take care of other things. I’m not using my Emergent Task Planner or any other logging tools other that the Accrual Bucket spreadsheet and a time tracking spreadsheet for billable work. With the billable work, I’m doing a check-in every other day so I don’t really need to plan much. However, for items like paying bills and setting up doctor’s appointments, I need to actually track SOME tasks after all. There are also things I’ve promised other people that I’ve forgotten about, much more so than usual, not to mention stuff like doing more for Patreon supporters.

I think the way I’ll deal with this is by keeping VERY SPECIFIC to-do lists for the following:

Perhaps I can make part of my day, no more than an hour, for just those things. Most of the commitments I’ve made are not long-term things and do not require a lot of time, and having 5 hours a week dedicated to those tasks might be enough time. I would preserve my overall “gathering state of mind” for most of the day.

So that’s what’s on my mind for now! In other news, I blew up my PC’s graphics card while trying to improve it (ordered a cheaper, crappier replacement since prices are 200% inflated due to cryptocurrency miners buying every graphic card in existence), and I was on the Lean Into Art video podcast on Thursday talking about just this very topic! Check it out if you want to hear more.