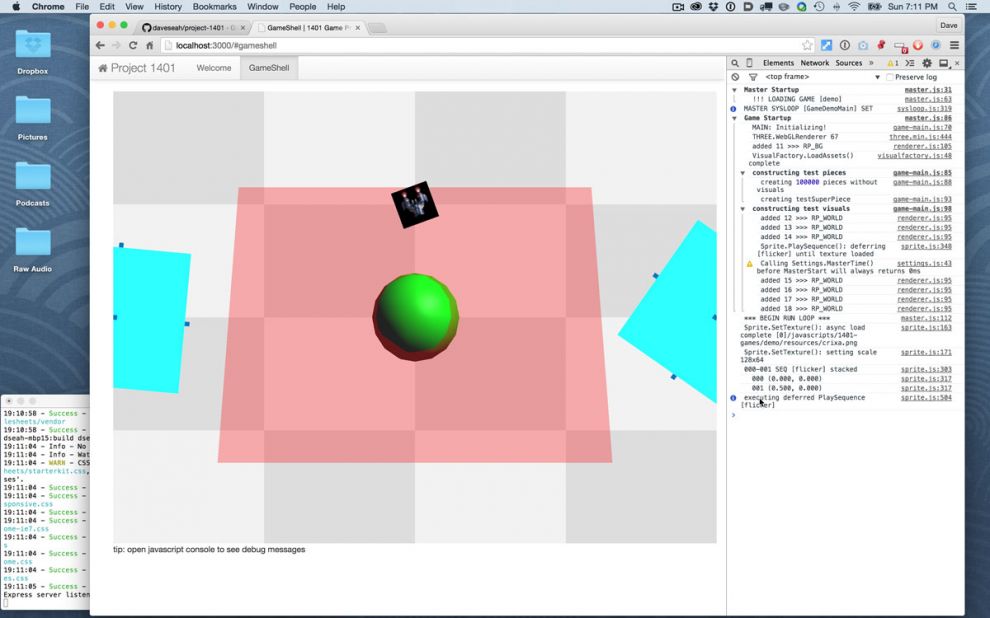 Happy Monday! Since I last posted, I’ve been working on my video game project, Project 1401. Although I’ve worked on a few commercial games, my goal with 1401 is to make my own video game. It’s one of many creative challenges that I’ve never fulfilled. I gave myself 10 years to get them done.

Anyway, spending a week on 1401 also gave me a chance to test my willpower against the demons Guaranteed Uncertainty and Guaranteed Tedium, two of the resistances that sap my enthusiasm before I even start working. A few insights bubbled to the top of my awareness in the course of battle:

The remainder of this post delves into more detail about the time expended over the past week. This is both a review of technical process (but not too technical) and the personal challenges I faced. Read on, if you dare!

The milestone was to have a spaceship moving on a starfield, and I got very close, but didn’t achieve it. I did get significant systems defined and reorganized:

As a high-level example of how these modules work, one can create a piece in the world by executing the following bits of code:

It may not look very exciting to the layperson, but it’s really nice to be able to write code in terms of how I think. For me, ideal code is the code that you can read and understand what it’s doing without having to look anything up. It’s like inventing my own language, and the better the language is the easier it will be to develop further.

Recap of My Productivity for the Week

I didn’t find it easy to get into the groove at first. As excited as I was about starting the project, the asshole demons Tedium and Uncertainty were there to fill my head with downer thoughts like, “You don’t know the best way to do this, and it’s going to take FOREVER to figure it out” and “Wow, you’re going to have to rewrite that entire module from scratch? Hope it doesn’t break!” and “Surprise! You’ll have to learn how to use a poorly-documented code library before you can do anything further!”

I found that I tended to procrastinate early in the day, often doing other chores before getting down to the distasteful tasks of sorting through the code I’d written 5 months earlier, and knew was in sorry shape. I was about as excited about doing this as I would be cleaning out my basement or attic just so I could find a memento from high school.

I kept a journal for each day to see what I ended up doing. Here’s a distillation of where the time went, with actual coding tasks bolded.

I should note that this was, perhaps, not a representative week due to the dental surgery I had on Wednesday (tooth extraction, socket reconstruction for an implant). This wiped me out for a day and a half. The pain hasn’t been bad at all, thankfully, so I can just take ibuprofen. Strangely I feel I’ve been more productive AFTER the surgery. I’ve taken less naps, for example, possibly because I’m not inclined to eat with all the stitches in my mouth plus the requirement of rinsing with medical-grade antibacterial mouthwash every time I swallow something. However, it was also mid-week that I had the realization about distracted thinking, and I was riding the momentum of getting stuff done.

It’s worth mentioning that the progress made this milestone is artificially inflated because I’m rewriting code that I’ve written before. It’s essentially a third draft. The code I need to write next—incorporating physics, AI, player management, leveling, game logic—are less well-defined and are in a rough state even in the parent project we’re doing for UCLA. This will require more design thinking, so I am anticipating (and trying to embrace) a slower pace. That will be a challenge!

Milestone 2 (M2) will be making a spaceship fly around a starfield. That was the original goal of M1, but I got bogged down in making the fundamental systems (Master, Renderer, VisualFactory, and PieceFactory) as good as I could make them. There were dozens and dozens of conceptual tweaks and clarifications that I was compelled to make, and forcing myself to meet the letter of my goal specification would have resulted in a half-assed implementation.

That said, there’s some interesting challenges to come:

After that, there’s MORE support systems to write!

Not to mention updating the project Wiki, describing what all these things do. And I haven’t even considered the art side of game development, but for now I’m not going to worry about it.

I have another week to work on this, as the UCLA project is doing another week of classroom tests (week 1 went well, I hear). Because the work I’m doing now on my 1401 project can directly improve the UCLA project for the next stage of development, I may start on timers, triggers, AI, state machines, and level management. Our current system is an ad-hoc collection of custom logic, written very rapidly so the team could get it in front of the kids during their President’s Day break.

So here’s my M2 Specification, influenced a bit by UCLA/STEP’s upcoming needs:

I will be amazed if I get that all done.

If any programmers out there want to check out what I’m doing, all the ongoing progress on Project 1401 is on my 1401 Project Page here on davidseah.com; there’s a link to the 1401 Github Repository there.

I also made an installation video to walk people through the process of installing the necessary development tools, using some new video tools I had lying around:

So that’s it for this milestone report! Thanks for reading this far!