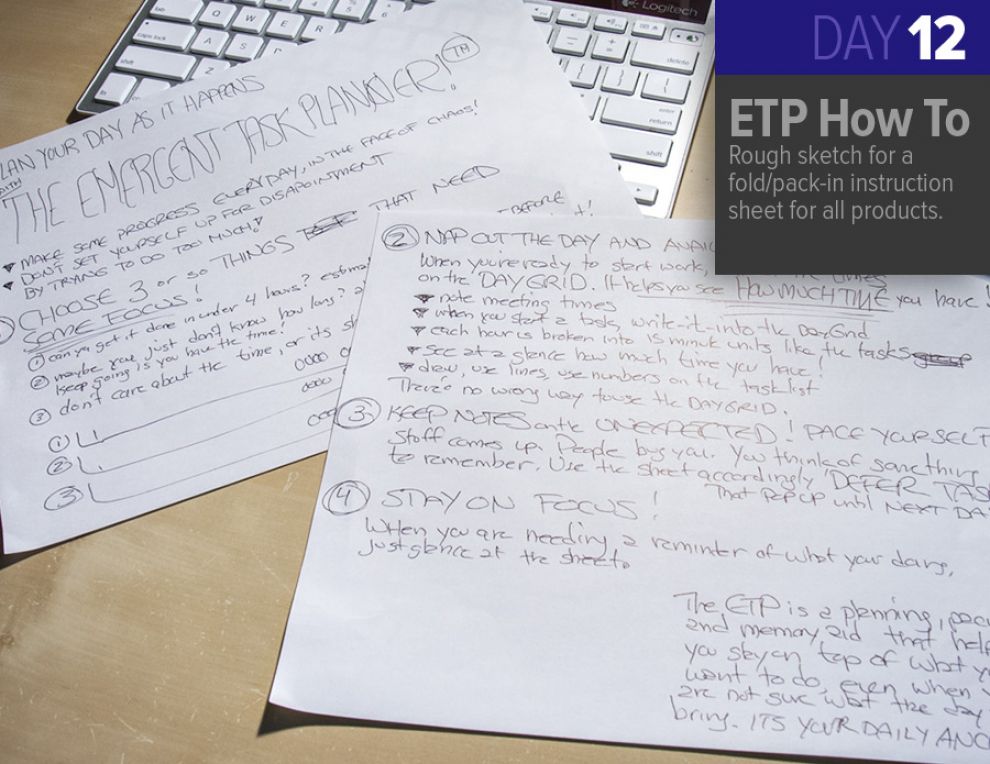 T’was a very busy day today, and I wasn’t sure if I could squeeze out something for the day. So first, I lowered the bar. Second, I chose to start a project that I’d held off from doing because it was expensive: the production of 10,000 sheets of full-color offset printed instructions for the various Emergent Task Planner products. This will run around $800-$900 just for printing the instructions. 10,000 sheets is about the economical minimum for offset printing locally, last I checked.

Currently, there are only two Emergent Task Planner products that have printed instructions included:

The print-on-demand instructions are black-and-white because that’s the cheapest option. Print-on-demand in color is kind of expensive. If I go with offset printing, the initial cost is pretty high, but the cost per-page is much lower. I’m at the point where I think that even if I printed 10,000 instruction sheets, they would all eventually be used.

A second barrier to producing these instruction sheets, other than cost, is the design itself. I’ve finally been making these ETP products long enough that I am feeling comfortable describing how they work; before, I considered the Emergent Task Planner design in a continual state of testing. I knew why I designed it the way it was, but I wasn’t sure how OTHER people were using it. I think I’m finally ready to write some instructions that I think will convey “best practices”.

As I was short on time today, I just took two pieces of paper and wrote down, very roughly, what I wanted to say. This took only 15 minutes, which surprised me given how many years I have avoided this task. Perhaps it’s just a sign that I know what the ETP is now, and because of that certainty it was relatively easy to just write down the understanding that is in my head. I’m not sure I could have done this even a year ago without second-guessing myself, because I had built-up the task in my head as being much more complicated than it actually had to be. Doing it the simple way seemed to be a good way to get this project unstuck! Making progress the goal for the day, as opposed to completion, also helped get the project started because I wasn’t fretting. Boom! 15 minutes! Draft!

Over the next few days, I’ll find the time to start designing the actual layout. For today, though, this quickie draft is meaty enough to serve as today’s THING OF THE DAY.