At last year’s Barcamp Manchester, some friends of mine started Future Tech Women (FTW), a group of women and men that support the idea of more women in STEM (Science, Technology, Engineering, Math) fields. I love to see empowerment of this sort happen, and so I’ve been attending their meetings occasionally and learning more about the difficulties and preconceptions that accompany their mission.

FTW will have a table at the upcoming Mini Maker’s Faire in Dover, NH on Saturday, August 23rd, and I was invited to contribute some design. I volunteered the template for my Cootie Catcher for Creative Self Reliance (which will be renamed, thankfully) and also modifications of the Barcamp Manchester Interest Stickers from last year. The challenge: create some 2-inch stickers that could be used to start discussions about STEM careers with girls to open their eyes to the possibilities.

After a brainstorming session, we had seven different “tech roles” that girls could choose from: 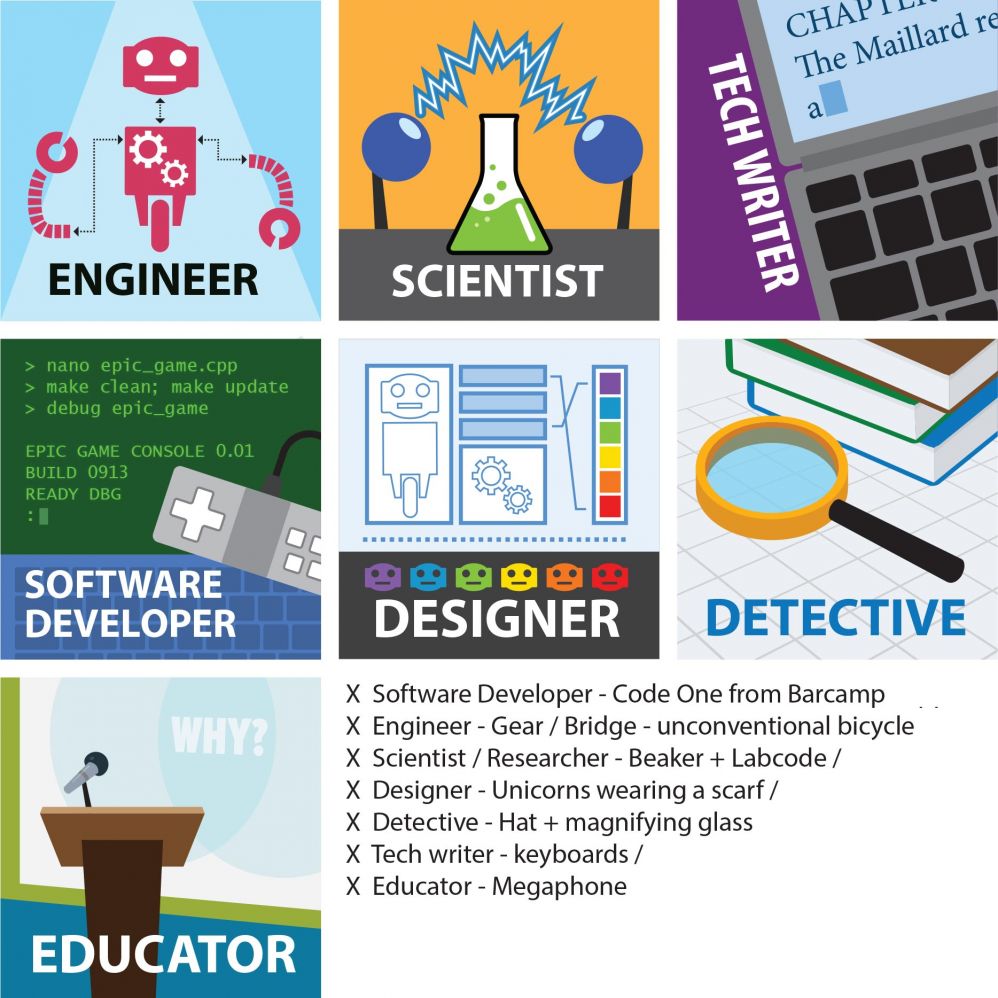 The text in the bottom-right was our original brainstormed ideas, but since I’m not a very fast illustrator (and I didn’t have a lot of free time), I re-used elements from old work or substituted items that were either easier for me to to draw. I also replaced items if they told a more interesting story or might be a little more clear. For example, “DETECTIVE” got piles of books instead of an archaic hat, and “EDUCATOR” got a lectern with a microphone because that seemed more glamorous than the megaphone idea. It took about an hour per sticker design, plus another hour to align, prep, and output all the files individually for use. I avoided stereotypical gender signifiers, having recently watched Anita Sarkeesian’s series of msmale videos, though I couldn’t avoid stereotyping the work roles themselves. Overall, they are not bad, but they are a little sterile.

Originally I was going to make 8 cool animal stickers so they could be customized further, but that would have taken me at least another 16 hours to do because I don’t really draw animals. It probably is easier to find some nice animal stickers at a toy store and use those! Career stickers, on the other hand, are more difficult to find.

It was a nice change of pace. I should practice my illustration skills more in the future, taking my time to develop a style that might be more fun than the usual nuts-and-bolts infographic design I do.