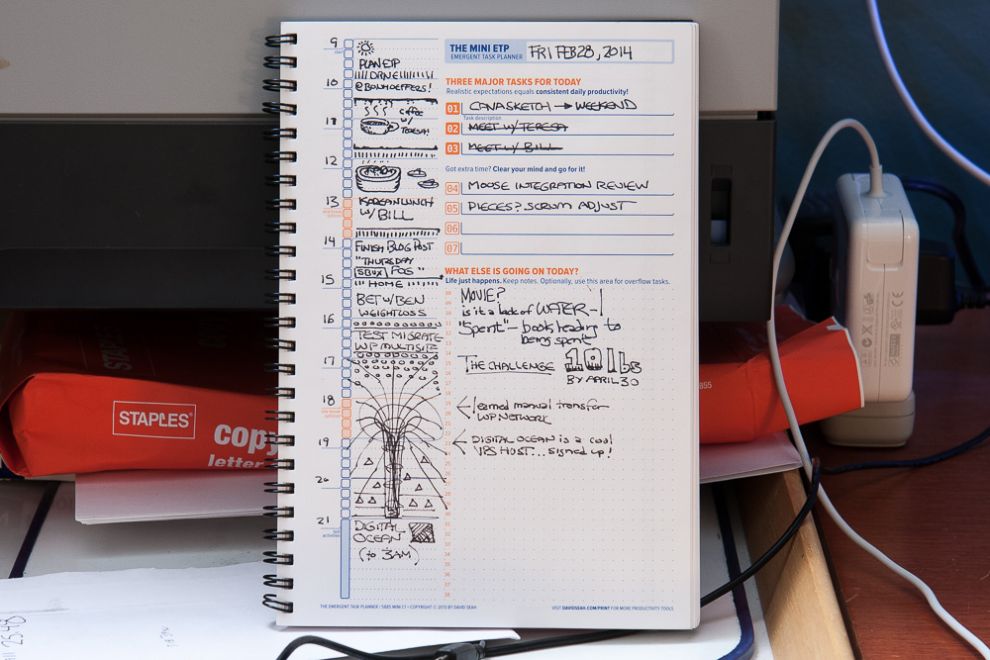 This is the last day I’m going to publicly monitor the day’s activities for brain fog and its possible causes. Friday was largely a social day, followed by a huge tech binge that surprisingly didn’t wipe out my energy.

OBSERVATION: The act of recording my activities creates mindfulness.

It’s already been a fairly foggy day, as it started with two back-to-back meetings that ran from 10:00A to 1:45P. These were not meeting I needed to prepare for, as they fell into the category of “entrepreneurial/creative local connection”, similar to yesterday’s unscheduled lunch with my friend Ashish. From each meeting came new ideas that provide energy in the form of inspiration and problem-reframing fresh perspectives.

For example, in the morning I caught up with my friend Teresa, an accomplished local writer/humorist that is promoting her first published Christian devotional, Prayers for Oppa. I had helped her with her website in exchange for future help with some artsy-crafty projects in the back of my mind, and in the course of conversation we stumbled onto the idea of making cool labels for my Social Yardstick and putting something on Etsy. It’s been a long-standing goal of mine to make something interesting enough to put on Etsy.

Later, I had lunch with technical guru Bill Cava for Korean Stone Pot Bibimbap at a restaurant he hadn’t tried before, where we talked about our current entrepreneurial projects. Bill also shared some of his “brain fog” insights, noting that one thing that made a huge different was drinking enough water and avoiding caffeine; I definitely could benefit from regular imbibing of water, which I keep forgetting to do. Bill also confirmed some thoughts I’d had about the nature of learning mathematics, relating his approach to teaching it to his daughter, and updated me on the goings-on at one of the nearby charter schools Academy for Science and Design. Unfortunately, they don’t take 46-year olds, but there ARE opportunities to participate in passing knowledge along through their SPARK conference. This was exciting to hear about, and it filled me with the desire to make something cool so I could participate someday in the future.

The net result of all this convivial activity is a feeling of shared momentum with like-minded people. In a way, it affirms that what I’m doing is (1) of interest to other people whom (2) I like and respect for what they are doing. This is the culture I choose to participate in, and for an independent freelancer for myself it’s really important. It is necessary!

OBSERVATION: There is part of me that thinks that such get-togethers are a “waste of time”, from the sense that I could have instead been working on projects, nose to the grindstone. It’s a hard feeling to shake, particularly when I think of what percentage of time seemed like “hard, billable work” this week. This week, I’ll count-up the billable, unbillable research, and personal time to establish a baseline. I am guessing it will be 15-20 billable hours, maybe 10 research hours. It doesn’t feel like a lot, but as a single freelancer there is no one else to handle IT, maintenance, billing, and social networking other than me, on top of the rest of the writing I do here on the blog (technically I guess this could be called marketing).

From 1:45PM to 3:00PM I wrote up the “Thursday Fog Update” and posted it. Afterwards, I thought of starting some work but Starbucks had grown quite crowded. I decided to go check out Christmas Tree Shops to see if they had a suitable square coffee table, which I am planning on using as the living room “tabletop photo studio” to handle the backlog of product reviews. They didn’t have anything, so I went home, arriving at 3:15PM.

I was feeling tired. This often happens to me after being social in any way, from conference calls on Skype to shopping at the mall. I’m not sure if it’s because the work that faces me just seems less exciting than people, or if it’s actual mental fatigue. In any case, it’s difficult for me to self-motivate out of this state, and today is no different.

OBSERVATION: This would be a fruitful area of research next week, investigating possible causes and solutions related to my after-socializing sluggishness. Can anything be done?

So I checked mail, and IM’d briefly with Ben about our next steps on the UCLA STEP project. We also made a challenge for ourselves to lose ten pounds by the end of April, and put up some money into a prize fund to see who would get to 10 pounds first AND lose the most weight by the end of the challenge period. This got me thinking about measurement tools; Ben uses a FitBit so I checked them out. I immediately jumped to The Wirecutter to see what they had to say about the best fat-measuring scales and fitness trackers because, you know, GADGETS.

The day quickly went downhill from there. I started to roast a 3lb chicken, part of a new initiative to master the art of roasting. As this was going on, I also started doing some work related to another client that wasn’t directly billable: researching a WordPress theme that I was thinking of using for my own site, with parts of it that were relevant to the client’s project. The question was how to test the theme with the data from my existing website, which led down the rabbit hole of paid backup/migration plugins (takeaway: they don’t handle WP Multisite) to setting up a new test server for cheap (takeaway: check out Digital Ocean (referral link) for inexpensive and easy management of virtual servers) to learning how to migrate everything manually.

I ended up going to bed at 3AM, having gotten sucked into server image creation and configuration. Digital Ocean’s server setup model charmed me into wanting to use it for future web projects, so I enjoyed myself to some degree solving the problems one-by-one, eventually getting davidseah.com migrated and working on a test server. This will allow me to develop a new layout without breaking everything on the current site. I also learned that cooking a small chicken is actually quite a bit different than cooking a Thanksgiving turkey, which I’ve done every year since I was in college. The kitchen utensils and cooking approaches I’ve used don’t work well with a tiny chicken. I need sharper, smaller carving knives and a smaller-but-deeper carving board. I need to calibrate the roasting temperature to the much-shorter cooking time. It should be really exciting.

Interestingly, no headaches encountered during the eight hour server configuration binge (documented, of course, to save time in the future). I knew enough to know where to start looking for answers, and being able to configure an entire cheap test server without worrying about messing up my old server helped reduce anxiety. Also, I was able to make use of past notes I’d written about doing WordPress migrations, which sped things along. And, there was chicken!

OBSERVATION: I don’t particularly like doing server administration, but it’s a little different when it’s my own server. It’s more like tinkering. I’m surprised that I didn’t encounter the resistance headache, or trigger the confusion of fog brain. Admittedly afterwards, I staggered into bed and conked out immediately, but there is SOMETHING that kept me going. Was it the lack of a sense of urgency? Was it not feeling I was under the gun? Was it that I already had some expertise, and therefore didn’t feel the frustration that normally arises? I was helped, certainly, by existing information on the Digital Ocean knowledge base (itself very good) and the ease of installing software packages on Ubuntu.

Thinking about last night’s server configuration binge, it occurs to me that I was constantly doing the following tasks:

Since it was Friday, I felt I could take the time to do this because I didn’t have to get up early the next day. It was, in hindsight, pretty productive in terms of learning something new. There were also elements of novelty, since I was not familiar with Digital Ocean, and I wanted to see what my website content looked like with this new theme I bought, which I wouldn’t be able to see until everything was set-up and working. I think it would have been a lot less interesting if it was merely a server upgrade.

I was also thinking about my website and its organization during the entire process. I’ve never been quite happy with the way content is organized here, and I think I know why: I want it to be the “information nirvana” repository for my thoughts. However, WordPress’ blog structure is not conducive to it. It’s too stiff. I am unable to easily relate posts or collect them using the WordPress administration tools. WordPress isn’t a thinking tool, and yet all my thinking is trapped inside it. That sucks! A necessary element of an Information Nirvana tool is to have a workspace where one can slush everything together, create links and sets visually, and then refine further.

My next step is to collect all the OBSERVATIONS from this week’s writing, put them into one post, and see what meta-conclusions I can draw.

It’s now 5:33PM on Saturday, and I’ve been writing this post for about an hour. My brain is fuzzy, despite having drank a Venti Chai Tea Latte. It’s been fuzzy all day, actually, in a different way. I’m actually feeling a little dizzy. Possible it’s because I slept in, or I need to eat something. Or I need to drink a lot of water.