I’ve started making a new set of color swatches for color-coding purposes, sort of a standard “Seah Palette “, so I could go back and tweak the ten for ten task list from yesterday. The color picking has expanded into a stationery branding exercise.

I previously looked at some popsicle colors because I really like popsicles. The design justification would be something like “fruity candy colors have a strong association reward” or something like that. However, as I thought more about branding of the Dave Seah stationery, I wanted to layer a few more justification. Perhaps these are more aspirations, actually…here they are:

I’m using the “royal we” here, because it’s not just me talking for myself. I’m also talking about the people who also are part of the tribe of people that appreciate these values. Everything I make fits in there somehow. On first glance, the combination of “fun” versus “measured” may seem paradoxical, but that’s just the way creative people are apparently. It’s fine.

How do you convey that as a set of COLORS, you ask? First, I thought I would review some of the past color coding work I’ve done for myself.

Back in 2011 I had the idea that there was an “ideal mix” of activities that, if achieved, would result in high-efficiency operation and productivity. So I made a diagram to accompany the Apportioning the Day article: 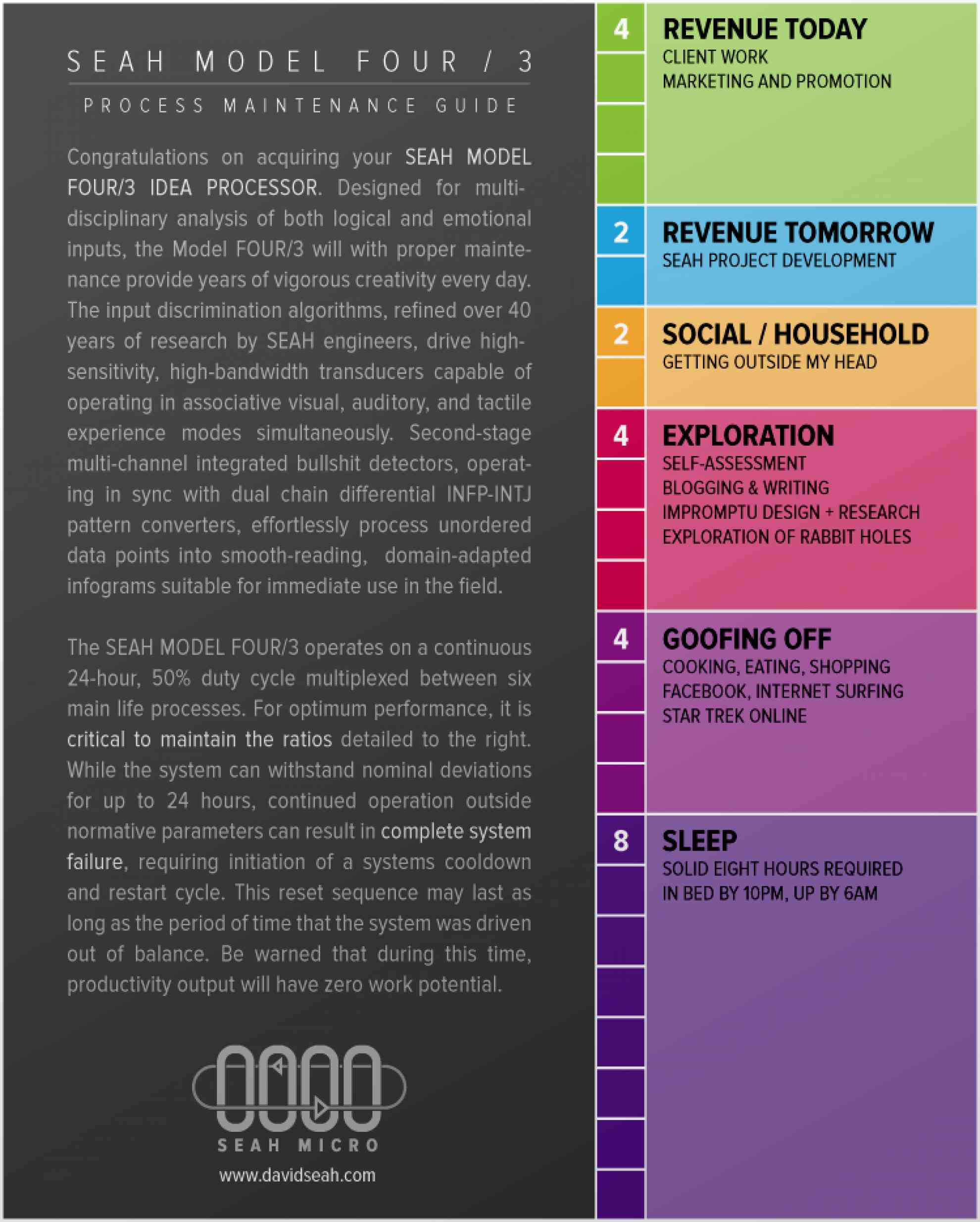 This is a weird color scale, and I remember it being difficult to find a set of colors that sort of worked together. What I like about this is the dark gray body and subdued text, contained within a block-like structure that on an initial glance looks like something informational. The dark gray also allows the colors to pop out much more, and the contrast is kind of exciting. I think this is a good example of how “measured” (as in the restrained text treatment) and “fun” (as in the stack of colors) can co-exist in a color scheme. 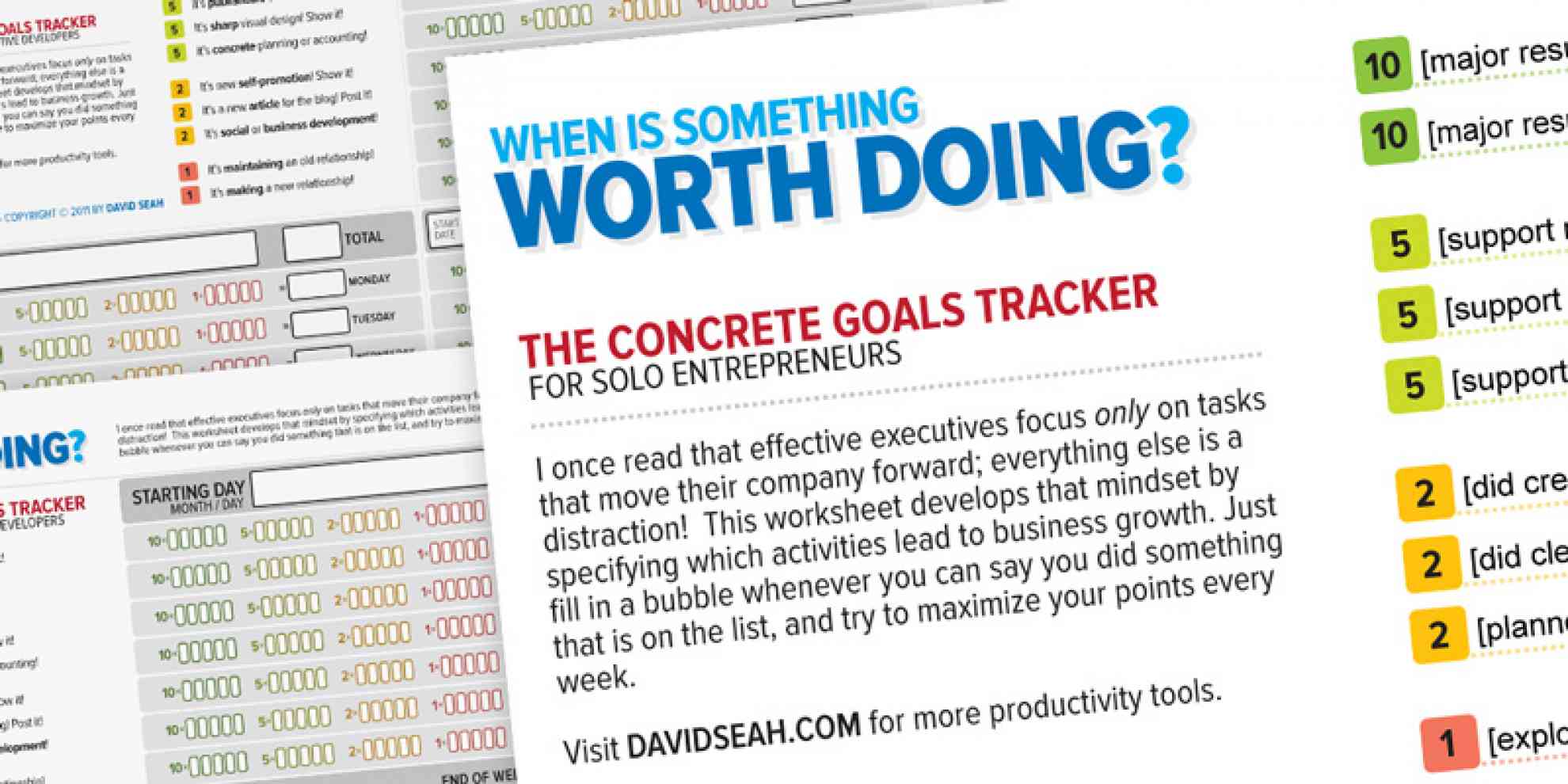 The very first form I made and posted online was The Concrete Goals Tracker, which to my surprise struck a chord with the popular Bartelme Design website in 2005, leading to an influx of new readers for my fledging blog. I’ve been following the pattern of design-write-release ever since.

It’s interesting to look back at the original design. While I’ve since simplified my approach to the forms by removing as many extraneous lines as possible, I’ve stuck with the same basic color scheme. This color scheme is the default Adobe Illustrator swatch selection :-) At the time I was making the transition from another illustration program called Freehand, and didn’t know Illustrator all that well. I’d avoided Illustrator for a while because it had a worse user interface (and in my opinion, it’s still not that great). But anyway, the default colors in the Illustrator palette are well-distributed in a cheery fruit-like color scheme. I didn’t need a lot of colors for this design, but you can see where the general theme came from. I’ve stuck with these type of colors for the design of most of the forms, particularly the experimental ones. 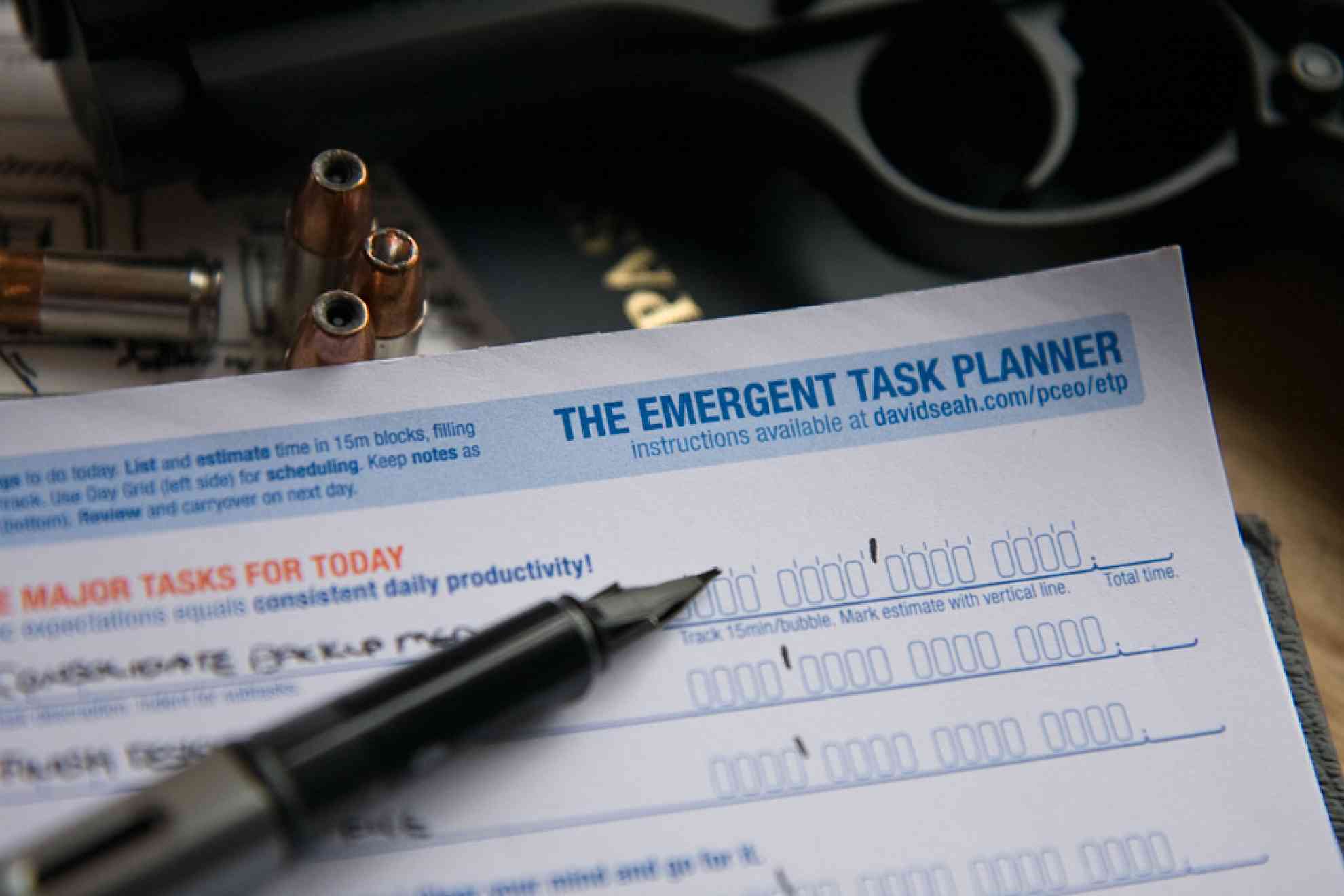 Today, most people seem to know my design through the Emergent Task Planner. Originally there were several color schemes, and in the most recent printed incarnation I’ve settled on a particular shade of blue and orange. Blue is the base color for most of the information, and the orange color is used to highlight important parts. These colors were picked to be complementary to each other, and are defined using the Pantone system so printers can match the colors exactly. I think these colors, along with the general style of design I do with the curved line elements and bubbles, are a big part of my current brand identity. “That looks like one of Dave’s forms” is something that I want to keep in mind. The typeface, in the past Helvetica Neue Condensed, has given way to the more subtly-refined Proxima Nova Condensed.

The above photo was part of a photo shoot I did to try to imagine the various forms as part of a super-spy’s arsenal of time tracking tools, sort of like a desk-bound James Bond. You can see the blue and orange colors and the typeface peeking out. While not as colorful as the other photos, there is a kind of gadgety clutter that I tend to like (see my current blog header for an example). This is part of the feel I’d like to convey. I like small personal gadgets designed for everyday carry, and having a rockin’ to-do list or journal should be part of the information warriors kit anyway!

Incidentally, this photo seems to have the dark grey background elements that let the foreground elements pop. I guess this is a personal aesthetic I have had for a while.

So I’m gravitating toward:

A secondary consideration is how I portray the products in photography. I think that the approach of showing them in a particular “use context” is a good idea. There could be an academic set, a teacher set, a science set, a parent set. Amidst the sea of clutter is a clean structured sheet of paper!

Next up: I need to figure out some new package ideas for the current products on Amazon, as it looks like I’ll have to start labeling them with actual UPC codes. Grumble. There’s also the continual need to have some kind of LOGO and BUSINESS NAME. I’ll likely still use my own name as the brand, rather than come up with some fanciful company name. Unless something comes to me, of course.

So that’s what I’m thinking so far. Comments welcome! It’s hard for me to really see how my products and design work is classified by people who like it, so I am just going with my own preferences and a handful of anecdotes I’ve heard from users.