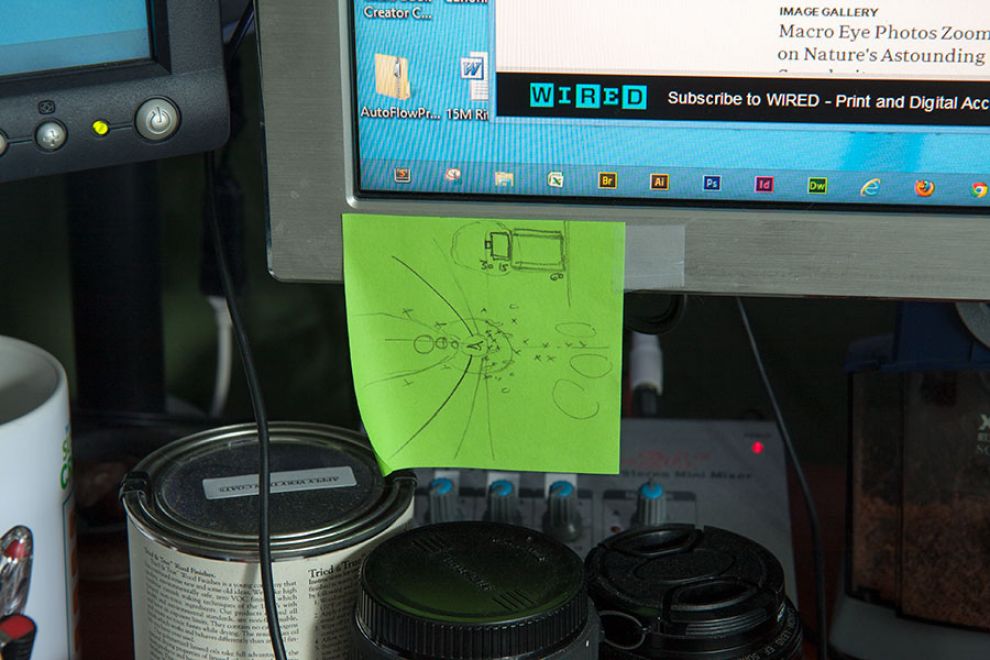 Here’s a rambling story about my Sunday that culminates in mysterious diagram I’ll call Productivity Time and Space. It sprang from a note I scribbled down early: “as one approaches a task near the do-ability event horizon, resistance-over-time increases exponentially”. Or something…I wouldn’t take it too seriously :)

I was trying to get out of bed, and I kept falling asleep. One reason is I haven’t slept in a bed for months, and I think the novelty of plush comfort conspired with low blood sugar to entrap me well past noon. As I walked to the bathroom, a handful of possible projects for the day flitted across my mindscape, distracting me with the beauty of possibility. And before the urge to act on them could ripen fully into action, they fled too far away to catch without effort on my part. I automatically consoled myself with knowing thoughts of what might have been more difficult to act on; many beautiful ideas are ultimately pointless in the long run, right?

Of course, I was lying to myself. But I had to go to the bathroom.

After my shower, I went downstairs. In the span of the next 15 seconds, I noted that the house had already begun to get a little unkempt after Dad and his foster son had left. The floor needed vacuuming. The side table was piled high with clutter. Even the dining room table, which had been miraculously clean for two weeks, had started to develop a rich layer of junk mail and unwashed cups. I was pleased to see the new dining room chairs, though this reminded me I had to get the old chairs out of the basement and delivered to my friend Diane, who would hopefully upcycle them into something cool and offset my carbon footprint. I was now up to seven possible things to do.

This collecting of “things to do” continued unabated for the next 15 minutes until it filled all my mental capacity. Every one of them was doable, but none of them was easily doable. Or were they? Most of them required some effort of planning or physical exertion. Some of them required a bit of thinking on my part, which meant I needed to understand what the actual problem was. I knew from experience that they were all doable, but I felt a lot of “blah” inside. None of the productive choices I had triggered a sense of delight or anticipation the way that a gourmet chocolate cake from Boston or extreme new tool debuting at MakerFaire. And so I turned on my computer and looked at Facebook, then at Wired, then at Polygon, Massively, Cool Tools, Ars Technica, and so on. I read a few interesting articles, jotted down some bookmarks, and then got bored again.

What the hell is wrong with me? Here I was, wasting a perfect sunny day. Why was I not self-motivating? Why did I stop myself from working on something cool?

First, it was that voice in my head saying that it wasn’t worth it, or it didn’t have the necessary “starting information” (as in, “I don’t know where the broom is”). This voice doesn’t speak words, but it is supremely jaded and doesn’t want to do anything. While this voice, which I’ll name “Stupid Head” for the purposes of this article, doesn’t exactly say that he has no faith in humanity, but I suspect that’s the case. Stupid Head only will get out of bed for rare and interesting things, if there are no other pressing external responsibilities.

Stupid Head is someone I have to live with, unfortunately. I don’t know why I have this voice, because I don’t feel depressed or negative on the macro scale of Human Existence; I have nothing to complain about, and I feel I have control over how I further make positive changes. The main physical challenge is exercise, but I have accepted that it’s necessary and have done the gym routine before and LIKED it. What keeps me from going to the gym is more the feeling that I’m not getting enough done, which is because I’m not starting enough projects. I also increasingly feel that I’m blocked on big creative goals that require a lot of learning. It is here that Stupid Head also makes his presence known, derisively commenting on the poor level of instructional material available. Stupid Head has expectations that the very next step is clearly defined, laid out properly, and has a guaranteed reward. Stupid Head is perfectly content to wait for these conditions, too, before expending any energy.

Stupid Head is probably the same as the Lizard Brain that many others have written about. It’s a kind of fear, I think, that has learned to present itself as strength. It’s fear that has hung around my buddy Mr. Rationality long enough to speak the language. For example, what’s a good way of making fear look reasonable? Ask another question! It’s prudent to know the facts before moving forward, right? My counter argument is whether anyone can know for sure without trying something; if there is no danger of death or permanent injury, isn’t it better to TRY than to sit around speculating, waiting for the answer to present itself?

At this point I was in the kitchen, and I decided that I just needed to stop listening to Stupid Head. I shut off my inner monologue and looked at the dish basket. I didn’t want to clear it, as there was no immediate sensual enjoyment from it, but I just quieted my mind and did it. As I cleared it, I encountered other annoyances like a misplaced whisk in the cutlery drawer, the need to repack the food storage containers, a glass that needed rewashing, a utensil that didn’t really have a home in the kitchen…and so on. Rather than give power to the annoyance, I just did it. After it was all done, I’d washed the dishes and cleaned up the kitchen at the same time. And THEN I felt the reward of having accomplished something.

Since planning seems to invoke the services of Stupid Head along with Mr. Rationality, I decided to avoid making a list of things to do. Instead, I just walked around the house and let the tasks swarm around me. I applied fireman-style decision making: quick gut check to see if it could be started in the next 5 seconds, had a likelihood of success with no downsides, and then went for it. I went downstairs to get a shirt, saw a blanket that needed washing in the laundry room, and put it in the laundry. While I was in the basement I smelled the cat box, so I went to change out the litter box. While I was changing the litter, I saw one of the old dining room chairs that I needed to take to Diane, so I dug them all out from the storage room. This required rearranging a lot of boxes to even get them, but I didn’t allow Stupid Head to comment. I got them moved outside the storage room, and at that point decided to leave them there until I found a time to take them out. This only took about 30 minutes total, which I found amazing. If I’d written this down as a to-do list, it would have seen much larger and daunting.

It was at this point that I thought that maybe I was living backwards as far as being a productive human being was concerned. It seemed that tasks just in front of me were unpalatable, but after they were done their status changed to satisfying. I suppose it might be because I tend seek tasks that rewards the senses or my mind immediately; this kind of anticipation I can feel. The feeling of satisfaction at having completed something, though, comes from a different place. Perhaps it’s a failure of my brain to association work with achievement, favoring cleverness over physical labor. Or maybe it’s an inherent distrust I have in anything I can’t verify with my own eyes; projects that are completed in the future are not verifiable, and therefore suspect. My mental model of productivity doesn’t take the emotional drivers into account, at least not systematically.

Breakdown of the Failure Chain

From the above, I can distill the following observations.

The post-it note in the photo is a representation of this. You can see these “shockwave lines” that become vertical, which represents myself in the moment. Just ahead of me are a lot of X marks, which represents a negative thought or annoyance. They pile up rapidly. In the far future are the big projects I want to get done, and between them and now are the little projects that make them possible. They are hard to see amongst all the negatives, especially the negatives that are right in front of me building up like a pressure wave. Beyond me are an ordered pool of accomplishments, and the remembered negatives float lazily away. The sketch is based on jet airplanes approaching the sound barrier, and I think the analogy of bursting through resistance fits it well. I want a sonic boom!

Slipping past the resistance barrier today required a few tricks:

This might be a good stepping-stone process; it’s not a habit yet, so I’ll want to focus on it. The big challenge is handling larger learning-based projects, those distant goals that require daily concerted effort to bring into reality.