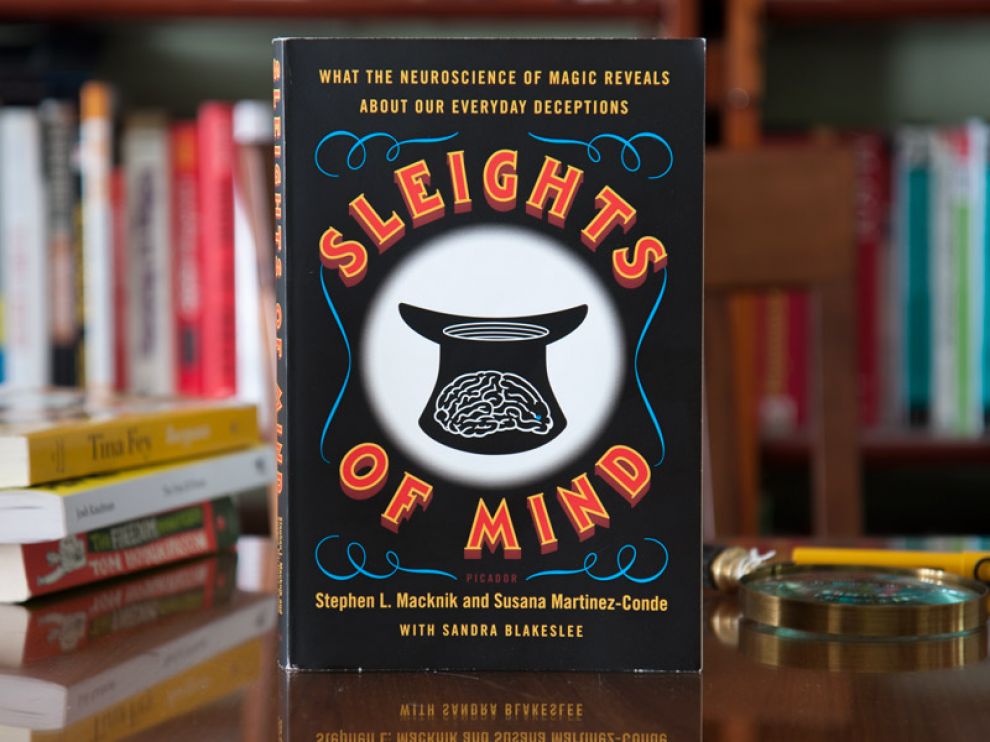 Sleights of Mind: What the Neuroscience of Magic Reveals About Our Everyday Deceptions
By Stephen L. Macknik and Susana Martinez-Conde with Sandra Blakeslee

My knowledge of graphic design grew out of a fascination with video games and the illusion of motion they created. From this grew an appreciation for animation, and from that I developed a curiosity about movie making and storytelling. Computer graphics became the means by which I explored the medium first as a kid in the 1980s, then as a college student in the 1990s. It was during grad school that I became aware of a relatively new field, Cognitive Science, that combined Computer Science with study of the mind; I remember wishing that I’d known about it before starting college, because I would have loved to get into that. I never did study it formally, but I started to look at my graphic design work from a pseudo-scientific foundation based on my reading. What makes an image interesting? How is my eye drawn first to a specific part of the screen? Perhaps there were involuntary reactions I could control in service of storytelling, like visual jujitsu.

Sleights of Mind: What the Neuroscience of Magic Reveals about our Everyday Deceptions slots neatly into my collection of useful insights about graphic design. Written by married Ph.D. neuroscientists Stephen Macknik and Susana Martinez-Conde, the book is a bridge between the world of science and magical stagecraft. Unlike most scientists who hypothesize and draw conclusions about how the mind works through experimentation, magicians are hard-core practitioners at putting those principles to work in the field. Magicians are, in essence, brain hackers. They understand how to exploit our innate lapses in attention, limits of perception, and tendency to draw meaningless conclusions to make us believe we’ve seen what we know is impossible.

A warning: this book reveals many principles behind magic tricks to illuminate just how susceptible we are to the discontinuities of our own brain function from the shadows cast by our own attentional spotlight to the illusion of having free will. It’s marvelous, particularly if you already have a respect for the craft of magical stagecraft. The authors of Sleights of Mind themselves trained hard to become members of several magician societies, and organized gatherings between their neuroscientist buddies and masters in the field of magic such as Teller, James Randi, and Apollo Robbins.

On a personal level, the book reminded me the principles in Dan Gilbert’s Stumbling On Happiness, except told in a more accessible manner. I found the experience of reading Stumbling on Happiness thought-provoking but somewhat wandering, whereas Sleights of Mind was more direct in calling-out specific ideas. While the book doesn’t dive too deeply into the neuroscience, it is a good starting point for further investigation into topics like the history of magic applications (the CIA, for example) and the science of perception and cognition. In that sense, it’s a great introduction to the possibilities behind sufficiently rigorous magical thinking; I knew I was in the right hands when I saw the opening quote from Agatha Heterodyne:

Any sufficiently analyzed magic is indistinguishable from science!

Mua ha ha ha…yes, indeed! There are many wonderful principles in this book that will enrich my future graphic and interactive work. If I do it right, you won’t even realize that you’ve being tricked into enjoying your work.