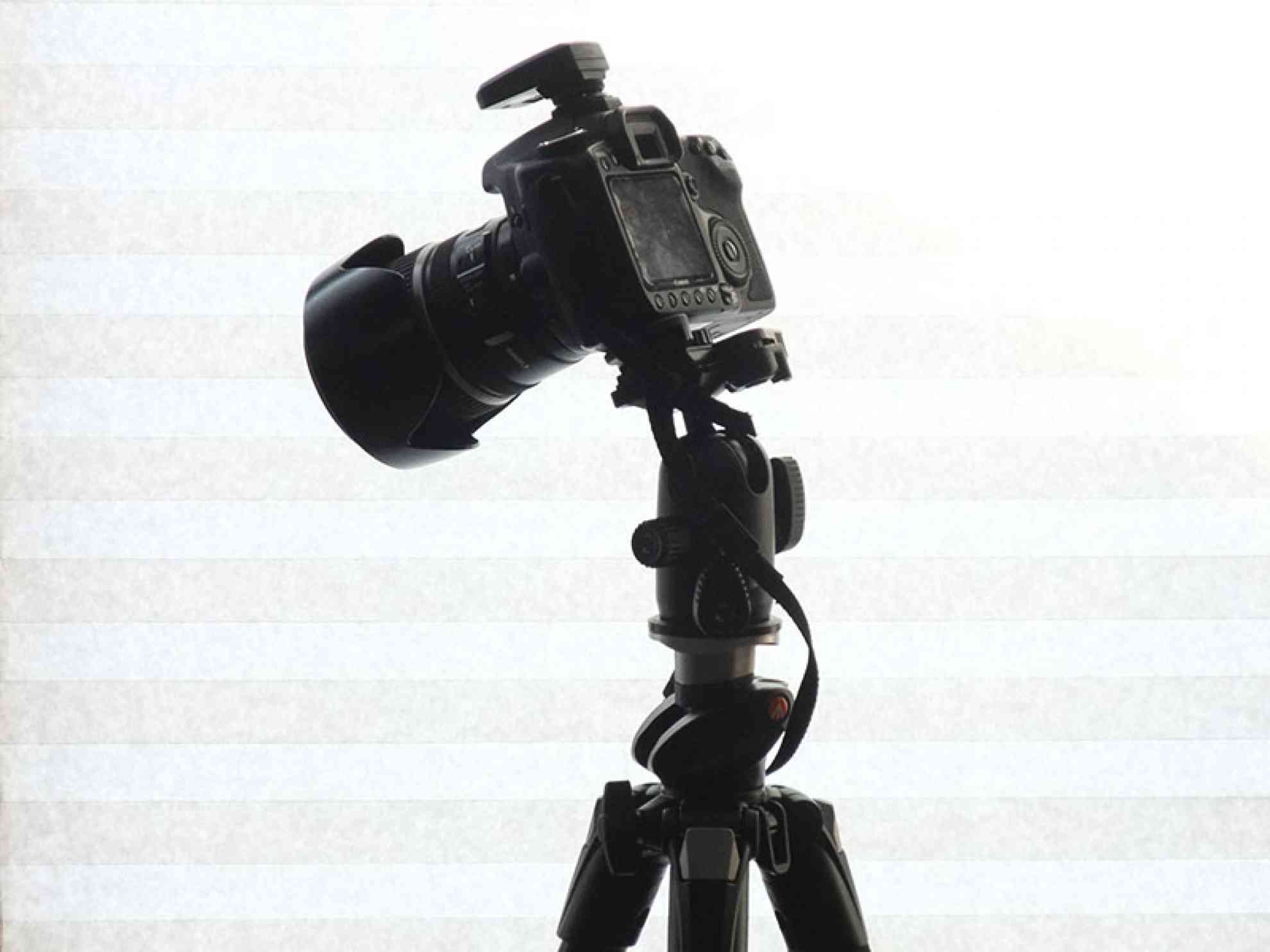 I recently got a new tripod + head, my first “professional” tripod purchase ever. It’s made a big difference in how I’m shooting pictures for the website, more than I even imagined. Here’s a quick review of how I’ve shot photos in the past, followed by what I’m discovering now.

My Photo Setups of the Recent Past

You’d be surprised at how difficult it is to make a sheet of mostly-white paper look interesting. One of my favorite places to shoot photos of my form designs and other stationery is the nearby Starbucks, which has huge windows on two sides. There’s one table there that has pretty good indirect lighting, and I tend to shoot my “product in use” photos there with my DSLR using natural light. It’s a little awkward, and difficult to get the look so I take lots of pictures. I probably also get some looks from the other patrons. 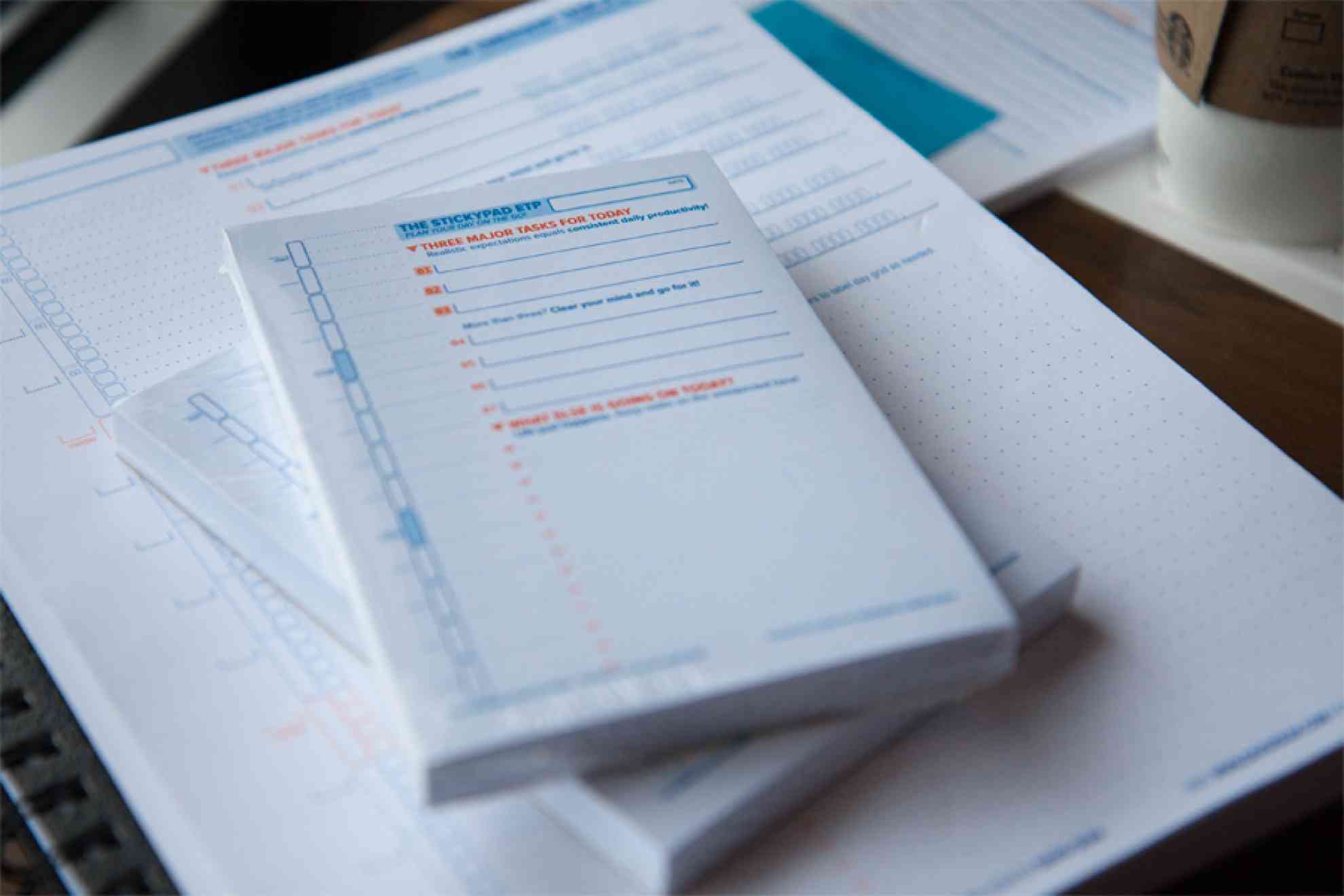 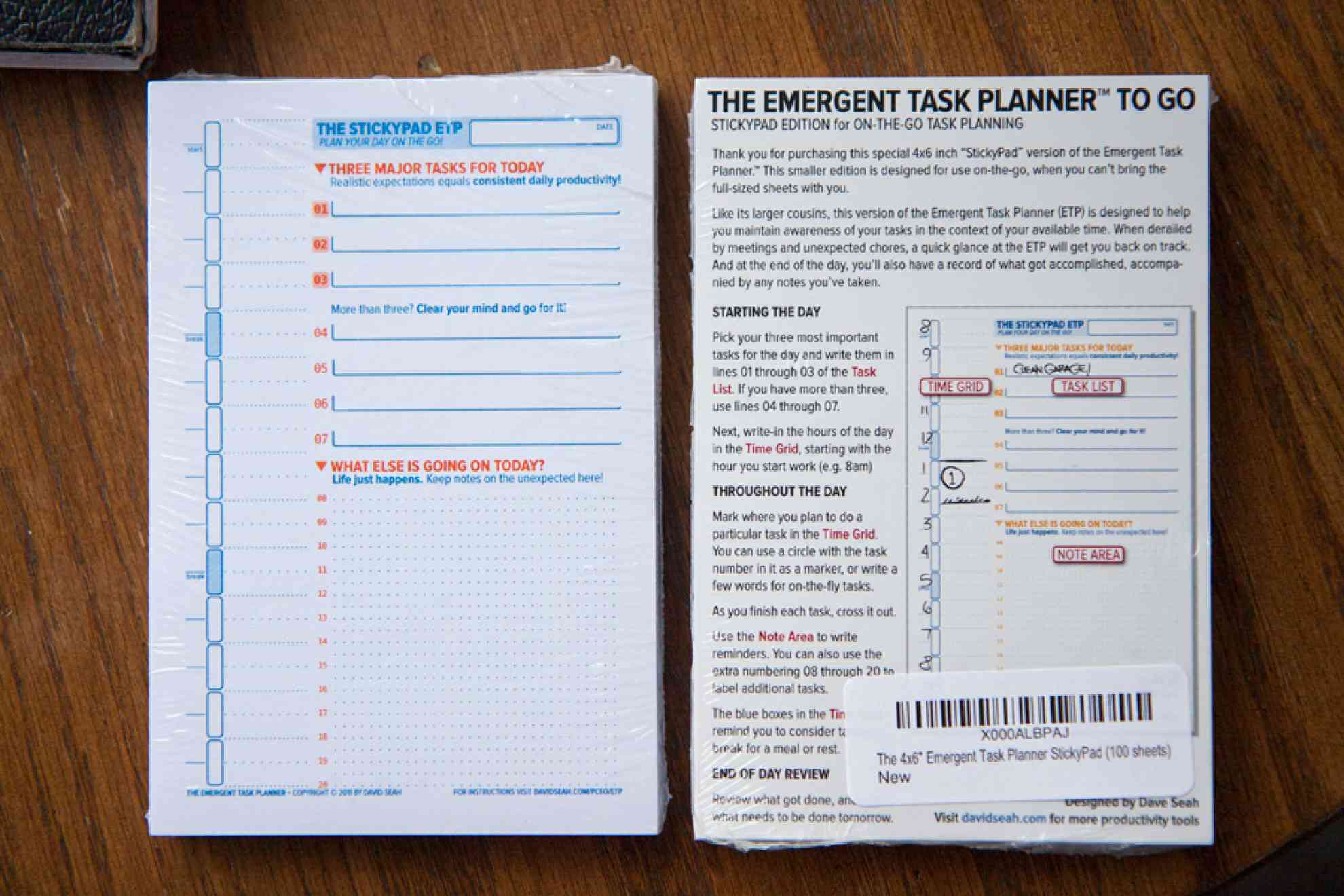 However, these are hand-held shots and I have trouble controlling the lighting, which varies with cloud movement and time-of-day. I also have to shoot wide-open at the maximum aperture of my lens, which contributes to the artistic depth-of-field effect in the first example.

So, I’ve also been playing with controlled lighting with a strobe and umbrella, on the advice of my good friend Sid Ceaser. He suggested building a reflecting bounce box out of white foam core, which I did: 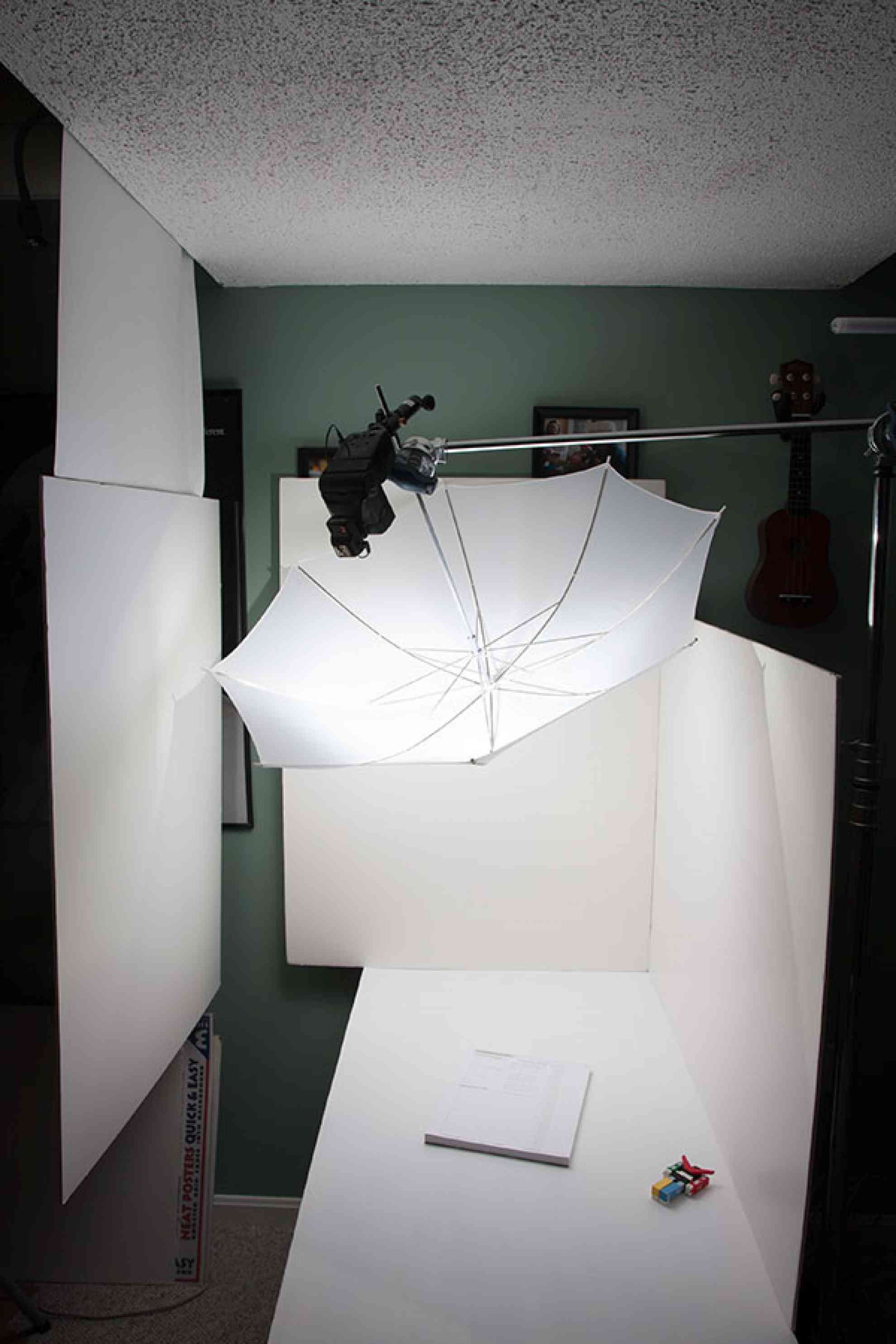 And it is capable of taking pictures like this: 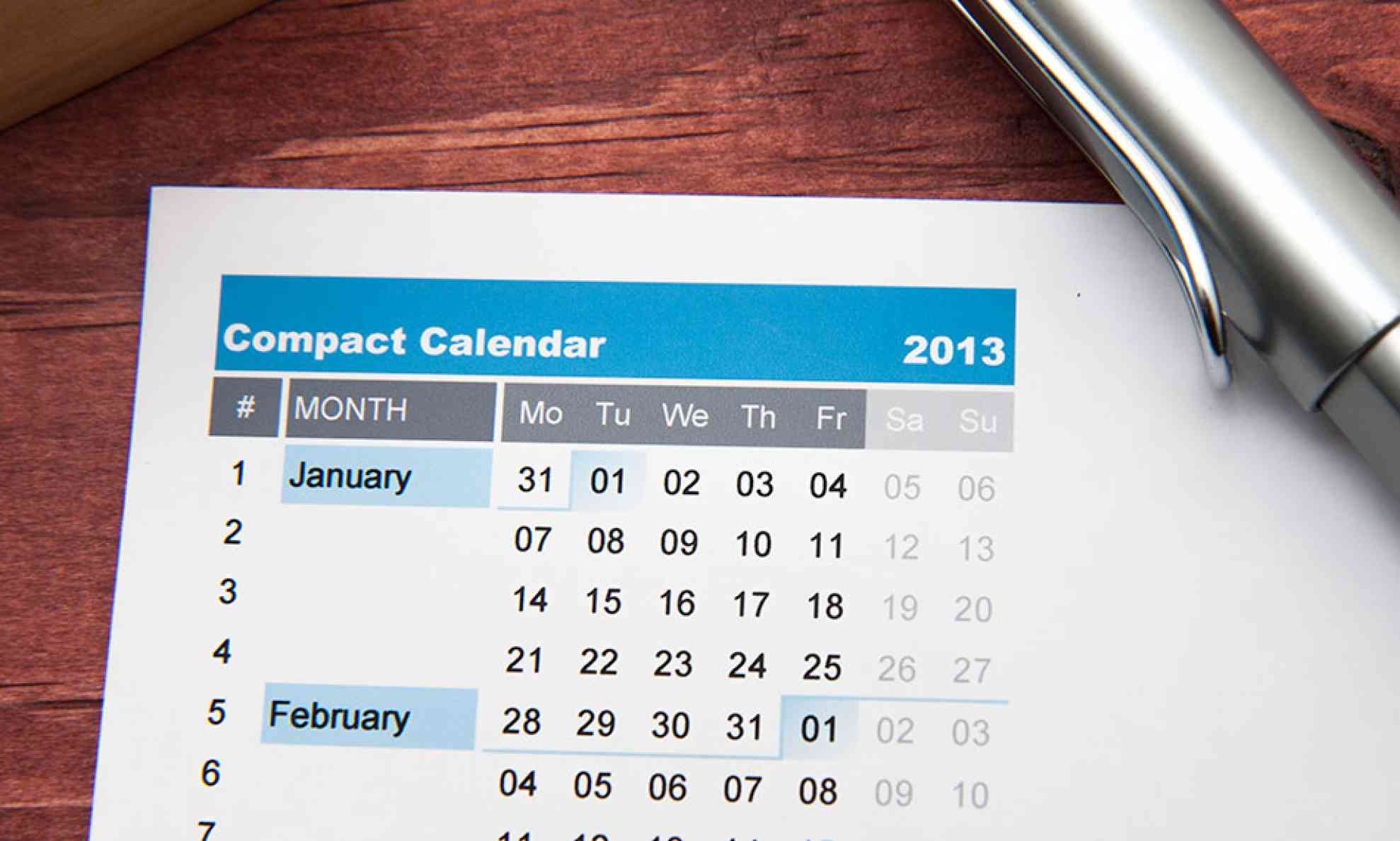 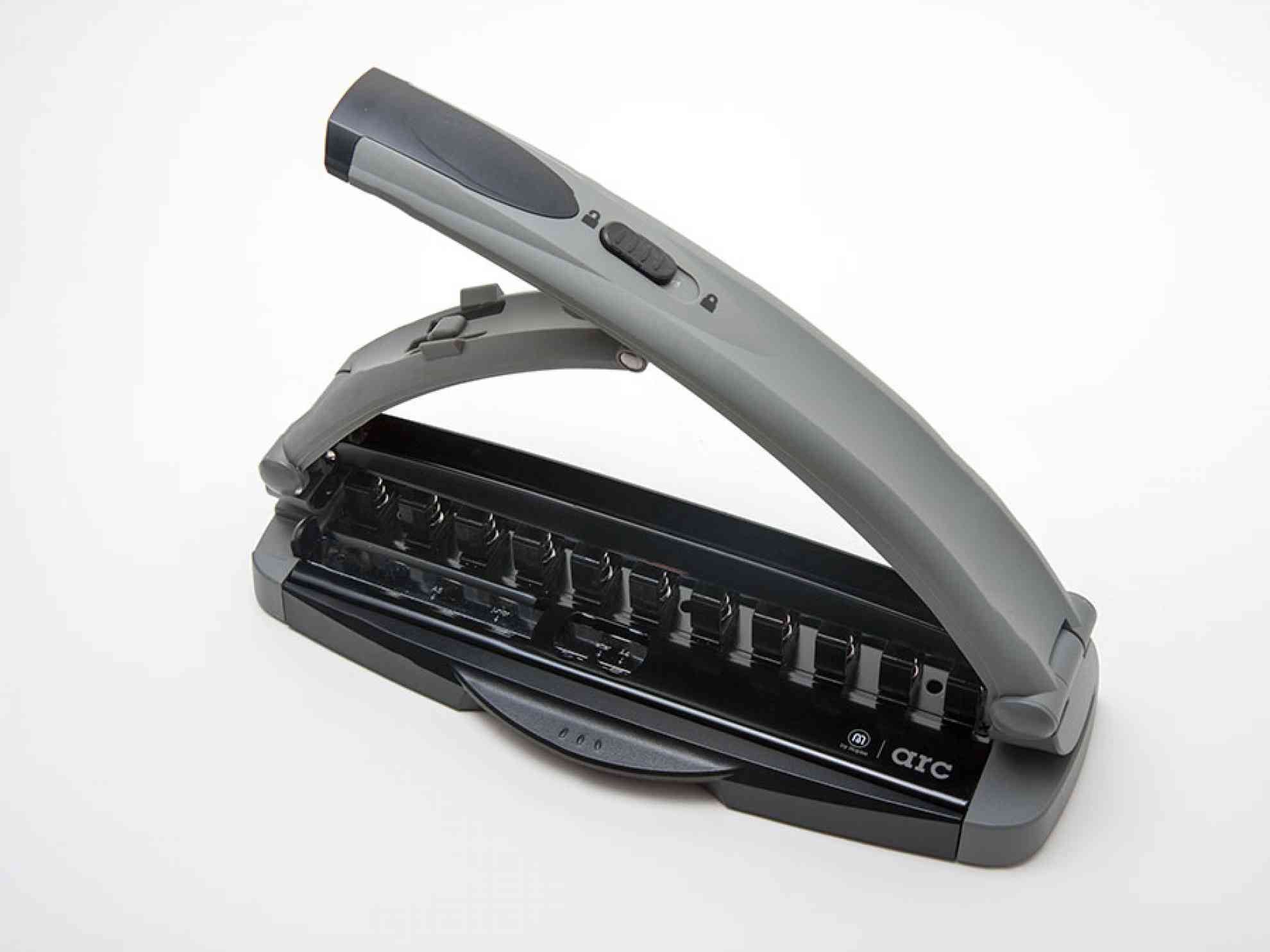 The advantages of using the bounce box are smoother shadows, smaller apertures for better depth-of-field, and consistency from shot-to-shot. I can also shoot handheld, because the flash is bright enough even at 1/8th power to shoot at 1/125th up to 1/250th (the sync speed limit for my camera). 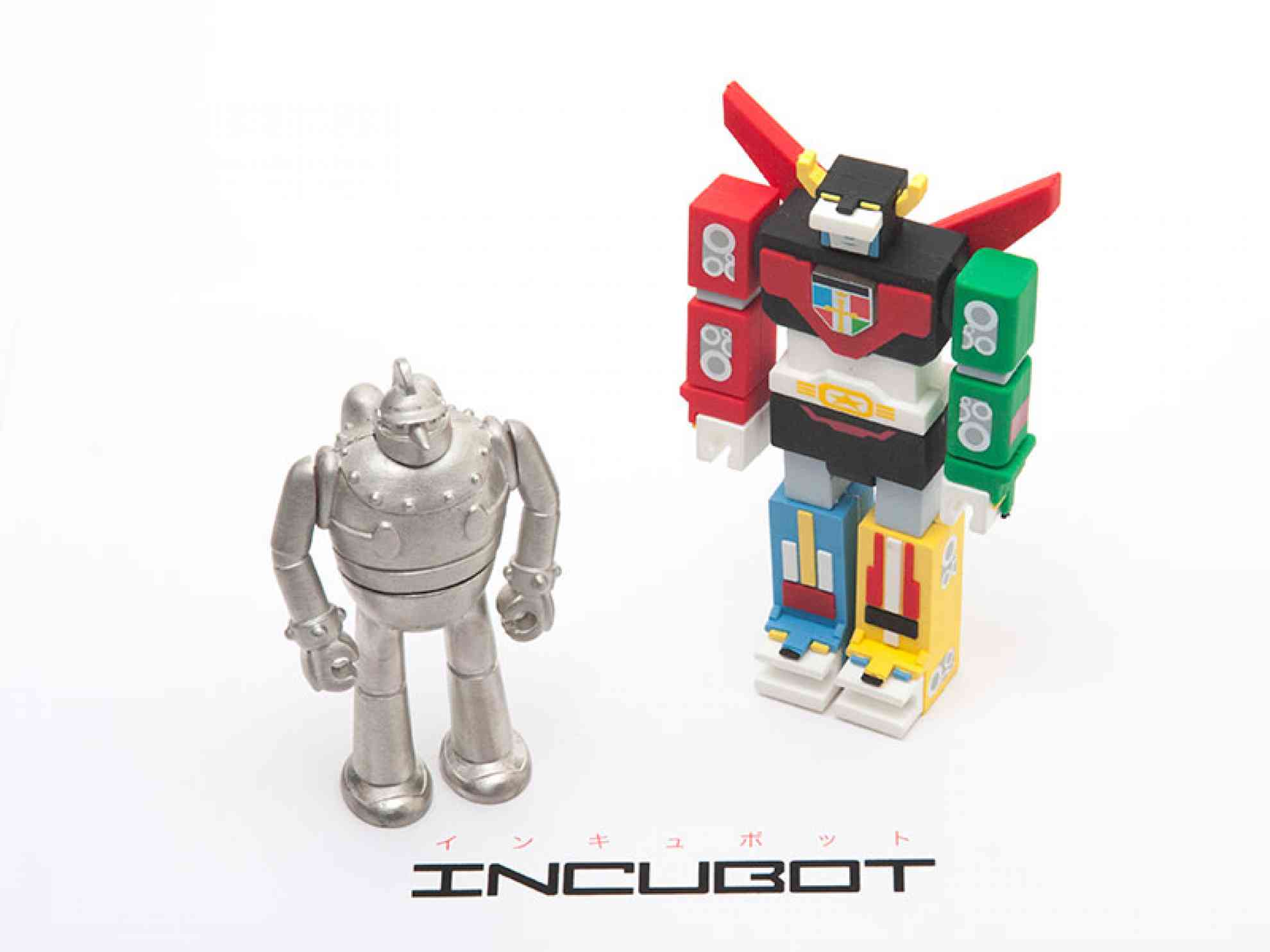 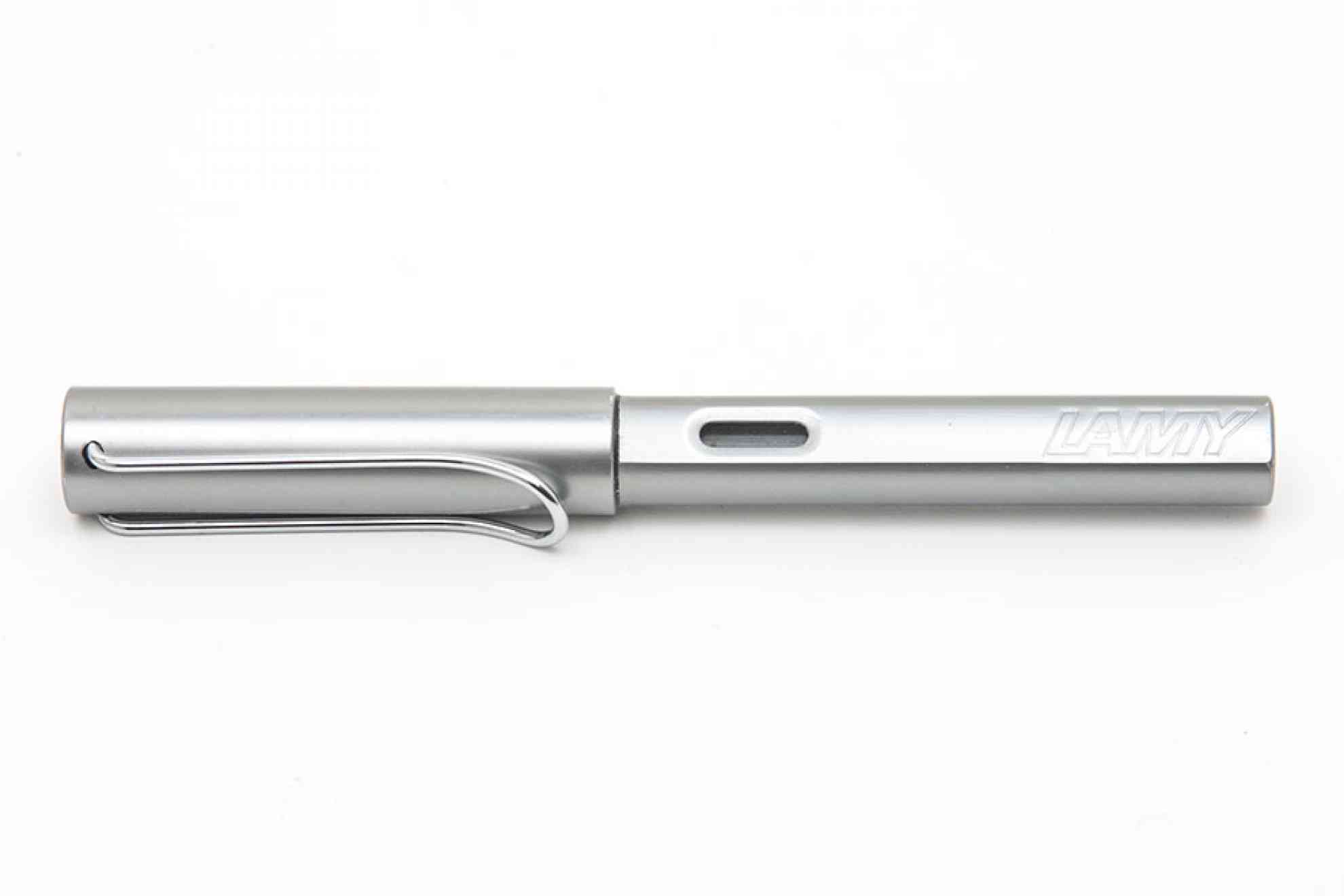 One thing I don’t like, though, is that product photos of my stationery tend to look kind of drab, just lying there on the white surface. It’s not so much contrast as it is geometry; I’ve found that propping them up makes them more interesting, but the smallish size of the bouncebox makes it hard to find a position that’s comfortable to shoot. To do it right, I’d also need to get a second strobe, stand, and radio trigger to light the background separately, and at the time I didn’t want to spend the money. I’m also shooting these without a tripod most of the time, and bending over the shooting table starts to hurt my back. It’s annoying.

A major breakthrough came about during the February “New Product Every Day” Challenge, when I put the strobe setup next to my desk, tethered the camera to the computer so I could shoot remotely, and stuck the camera on a rickety tripod I had forgotten about. The setup was similar to this picture, except with the light on the right side: 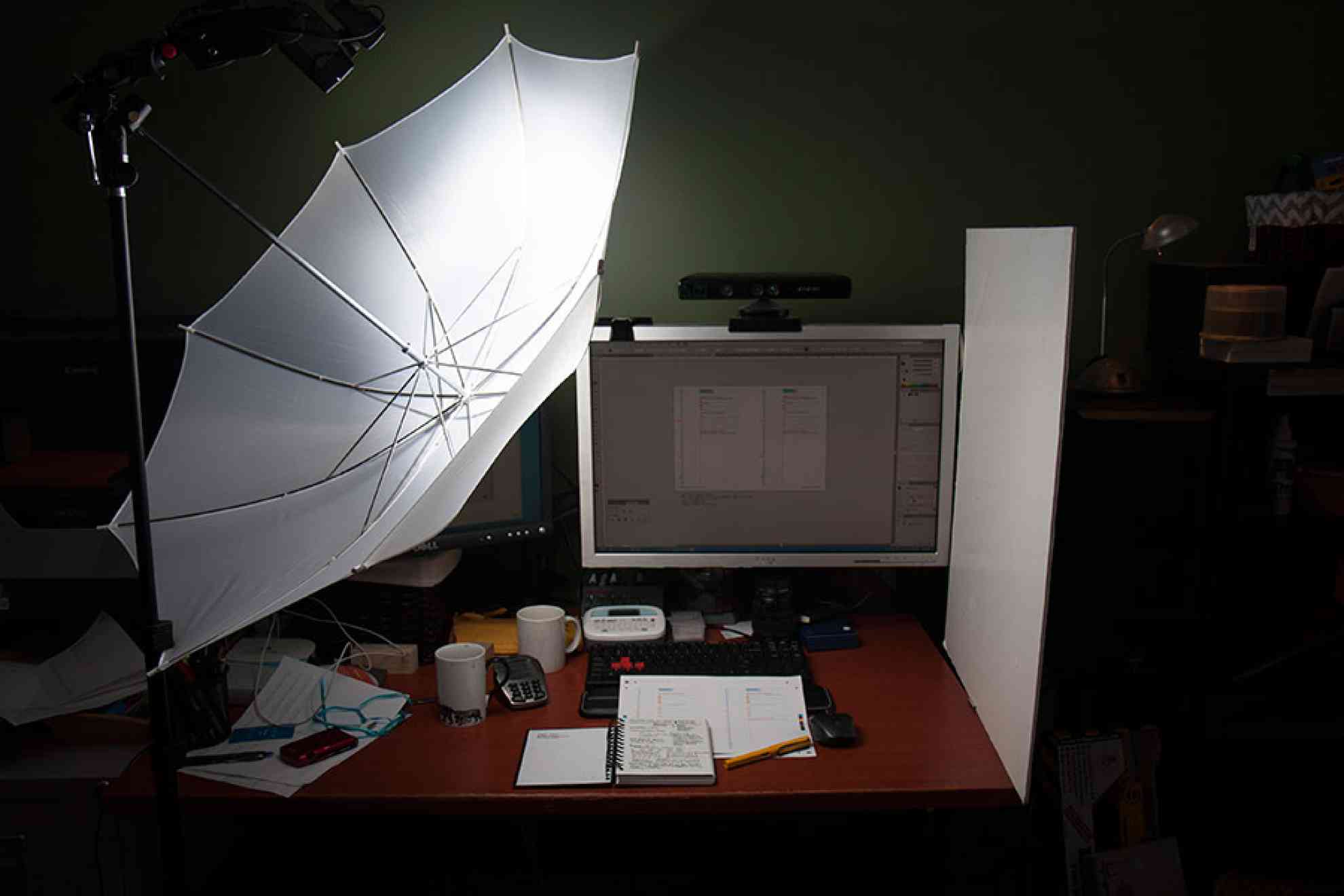 And the result was this: 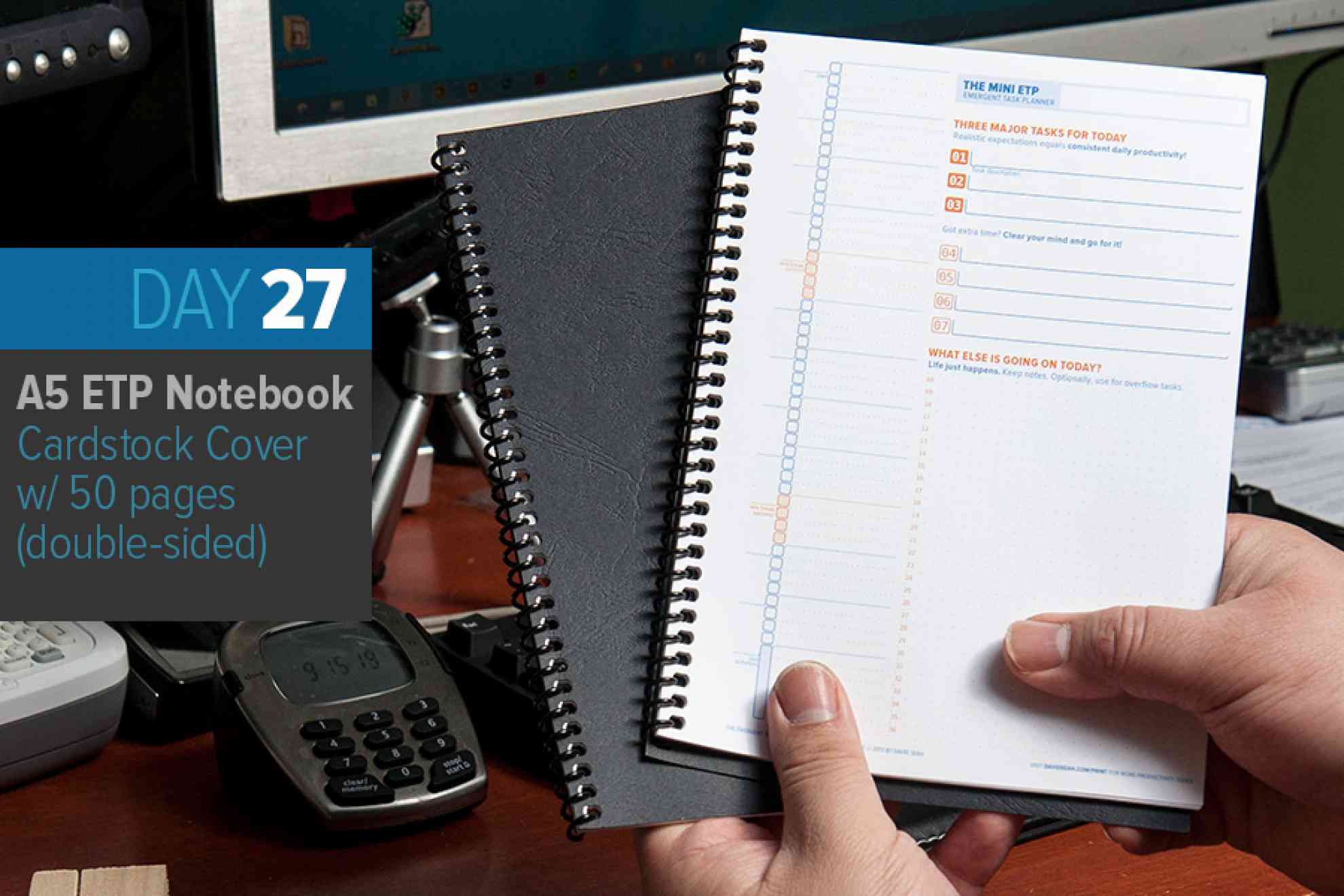 In this shot, I’m using the DSLR on the cheapo tripod. Although the lighting is more stark than I like, I was able to hold the product in my hand and get it off the table. However, the DSLR felt precarious on the cheap tripod, especially with the USB tether cable and cats running around.

I had some Christmas money left over, and considered my options. While the cheap tripod certainly was usable, it was a little shaky, and it was a pain to set-up and adjust. Every time I touched it, the focus point seemed to move, which made consistency a little more difficult. Since I had been watching Sid use his tripods at the studio, I knew that there were better options. He recommended Manfrotto as a good starter brand to get into.

Manfrotto is a well-known maker of camera and lighting supports, offering excellent quality for your dollar with professional features. I’d used some of their clamping products for museum projects, and I’d been very pleased with them. There are two parts to the tripod setup I purchased:

p>I’ve had the tripod for about a week now, and I’m surprised how much I’m using it. It’s a joy to use, speedy to set-up, and absolutely reassuring in its operation. It’s like the difference between driving your 20-year old college car versus a brand-new one.

I had originally thought I’d be using it for use with the strobe as described above, it’s come in handy for taking long-exposure images in natural light. Here’s a 3.2 second exposure of a circuit board (my old Apple ][ plus) lit by a 20W desk lamp…really dim as far as cameras are concerned. 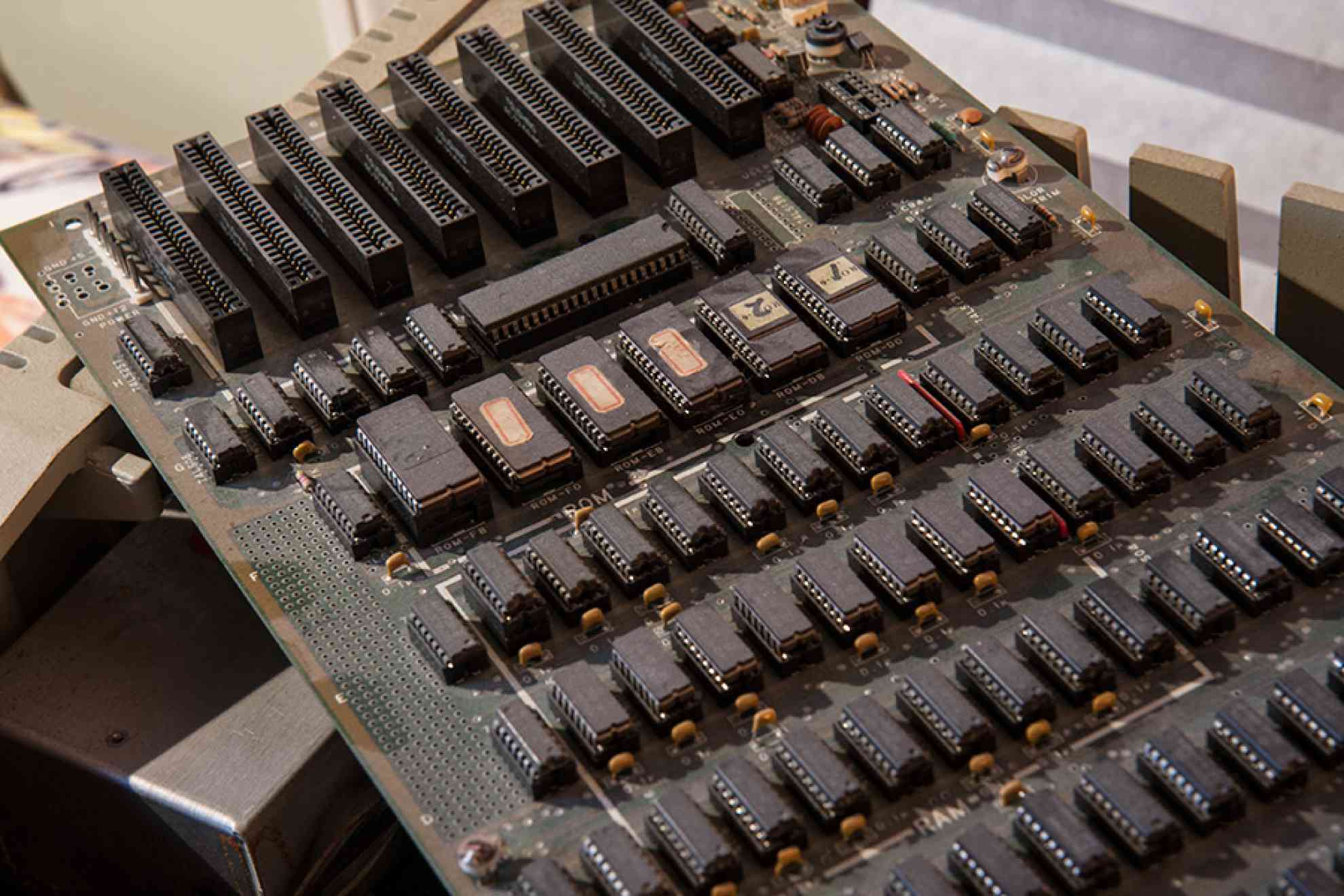 And here’s a recent photo lit by the same desk lamp, 0.8 second exposure: 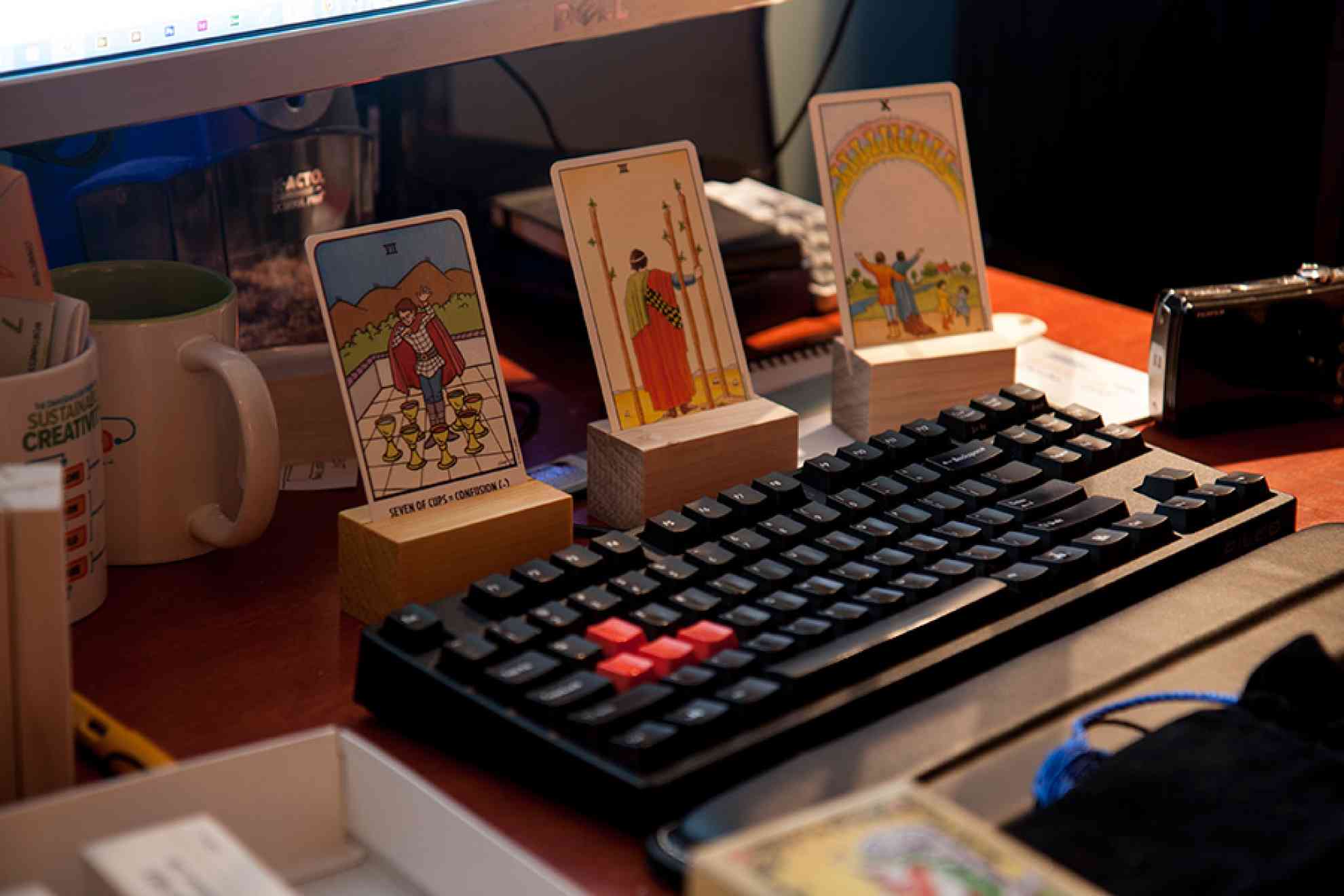 These are much sharper than I would have managed hand-held under these conditions, and they are shot at ISO 100 for lower image noise. The DSLR, sitting on the tripod, is set to timer mode to allow the tripod to stop vibrating after I physically click the shutter button; while the vibration is very slight with the new tripod on my carpet, it’s still enough to blur the picture. When shooting tethered to the computer, the shutter is triggered electronically so I can disable the timer mode. Just this morning, I was able to shoot this picture by the wan light of the early East coast sun: 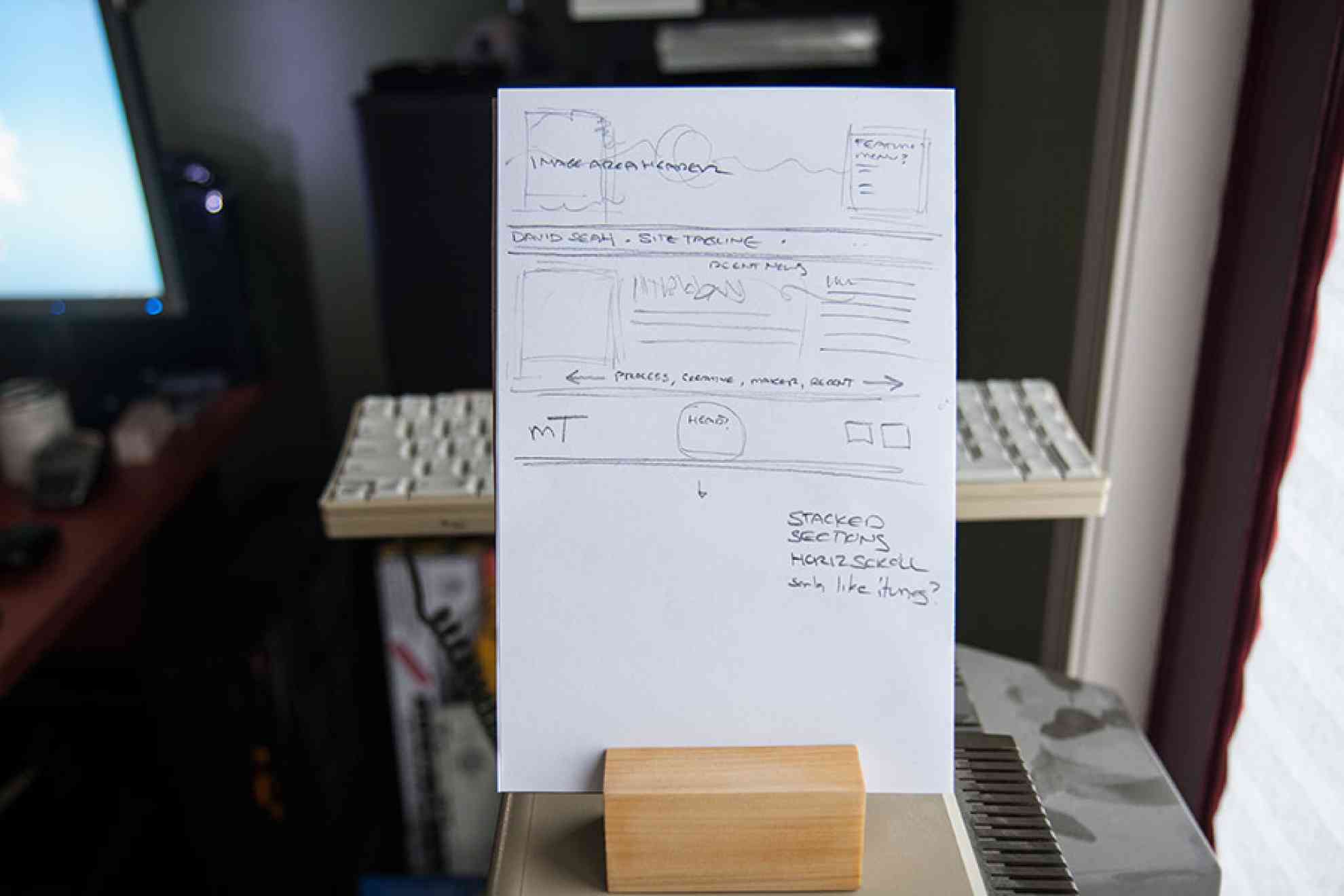 It took about 5 minutes to set-up and shoot without fussing with lights using Aperture Priority mode with a +1 exposure adjustment. A little extra processing in Photoshop pushed the exposure up a tiny bit. I was so happy with how fast it was to set-up that I decided to write this post about it.

So there you have it: a few of the secrets of my home photographic setup! I should note that all the photos above have been processed in Photoshop to my liking, since I’m shooting RAW to give myself some leeway in balancing shadows versus highlights. The lens used in all cases was a Canon EF-S 17-55 I got on sale. 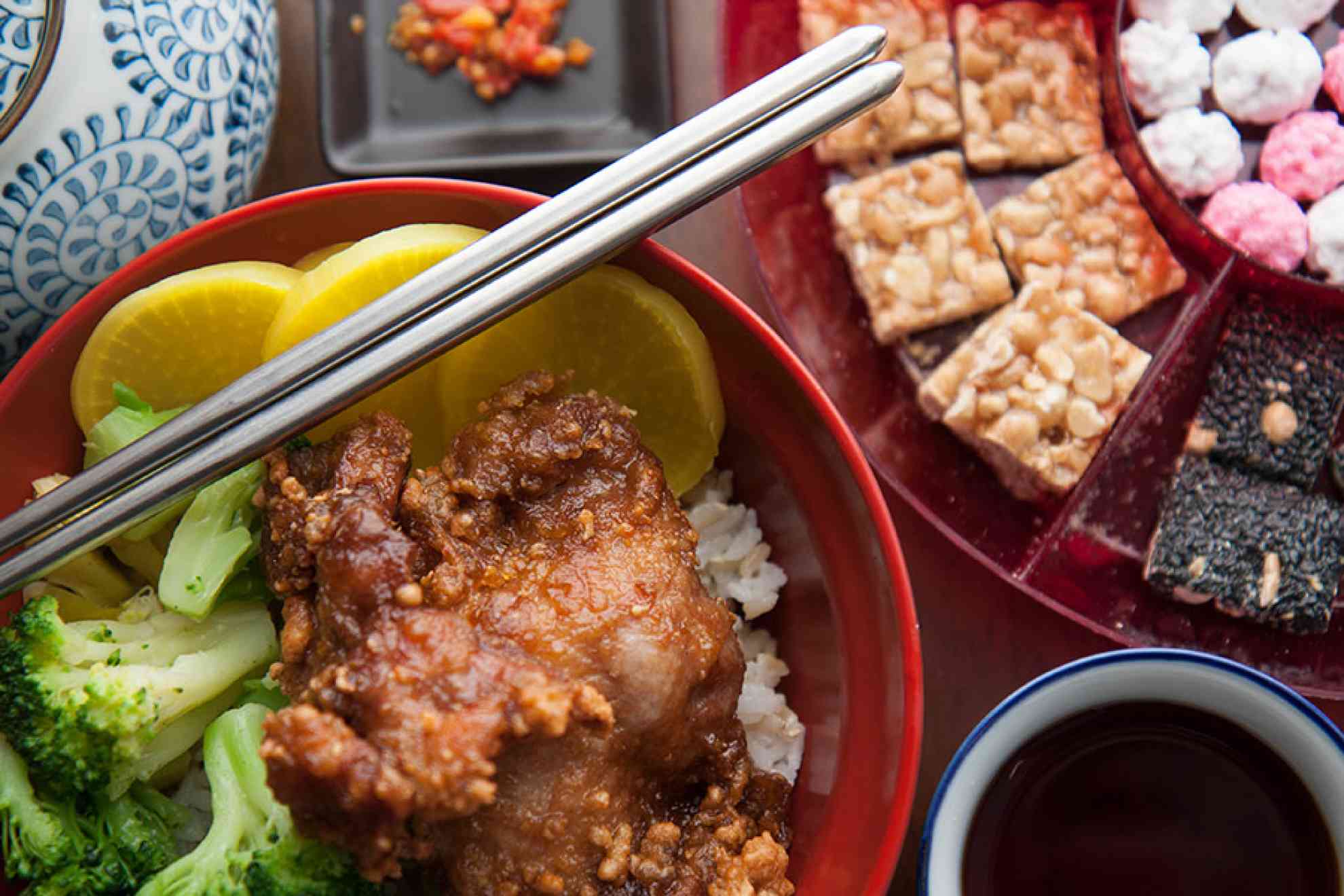