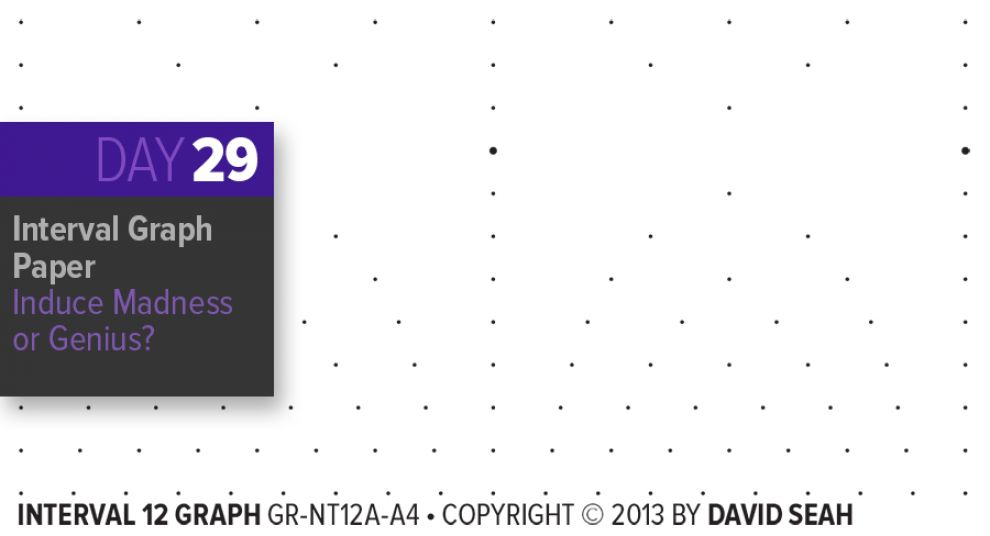 After doing all the survey analysis late last night, I fell into a fitful sleep. ETP users who wanted double-sided pages were going to get their notebook, but the significant minority of single-sided page users would not be satisfied. They wanted their dot grid on the blank side, but it would have to wait.

I dreamed that there was a magic graph paper that went far beyond dot-grid paper in its mystic properties, but in my vision the paper was blurred and I couldn’t get a good look at it. When I awoke, I thought I would see what I could come up with. I based the design on ratios from 1/1 to 1/12, foggily thinking that maybe some secret of music theory would be revealed if I sketched on it for a long time. 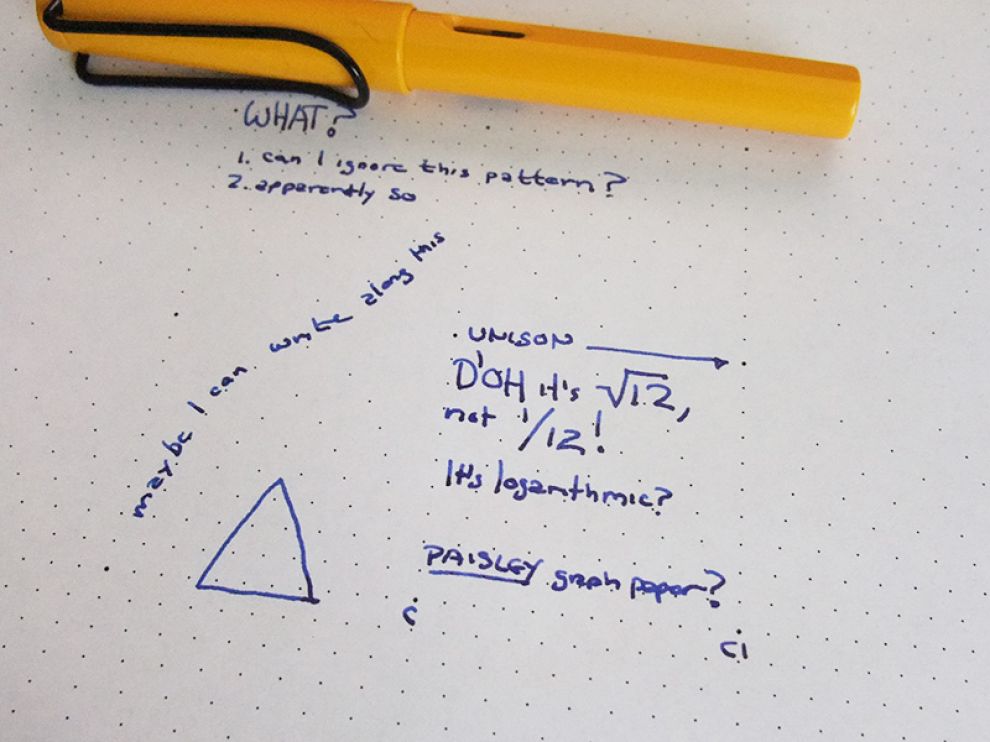 I took a basic interval and divided it into 12 equal steps, thinking that this would be somewhat equivalent to 12-tone scale as people perceive it. From my thin grasp of music theory, though, I know that an octave is actually a doubling of frequency, and that the divisions between notes are actually (checking Google) the 12th root of 2 on an equal-tempered scale. Which is not exactly right either, because it’s not the distances that matter, but the consonances and dissonances between frequency relationships, but they’re close enough to allow transposition of keys. OR SOMETHING LIKE THAT. At that point I decided to just draw dots.

To see what would happen, I divided the basic interval in 11ths, 10ths, 9ths, and so on down to 1/1. Then I repeated and reflected it to see what it would look like. A pleasing pattern, I think, emerged. I put stronger dots down so I could see the basic blocks more clearly, printed the PDF out, and then tried writing on it. Perhaps a MAGIC INSIGHT would occur to me, like in my dream. Or I would go MAD trying to resolve the shapes patterns with what I was doing. I ended up writing (see photo), but that put me in in a non-visual mode (mostly) and I was able to ignore it.

So what good is this? I don’t know. Maybe it will spark an idea or a discussion. What if it was a type of fractal pattern? Or a subtle Escher-esque pattern that influences our subconscious patterns? My takeaway is that I should continue to make bizarre graph papers to bend the mind…it’s an interesting line of inquiry!

You can download US Letter and A4 below if for some reason you want to play with it:

I am challenging myself to create a new product every day for the month of February 2013. The Challenge Page lists all the products in one place. Check it out!