Insights from a Failed Sugar Coma 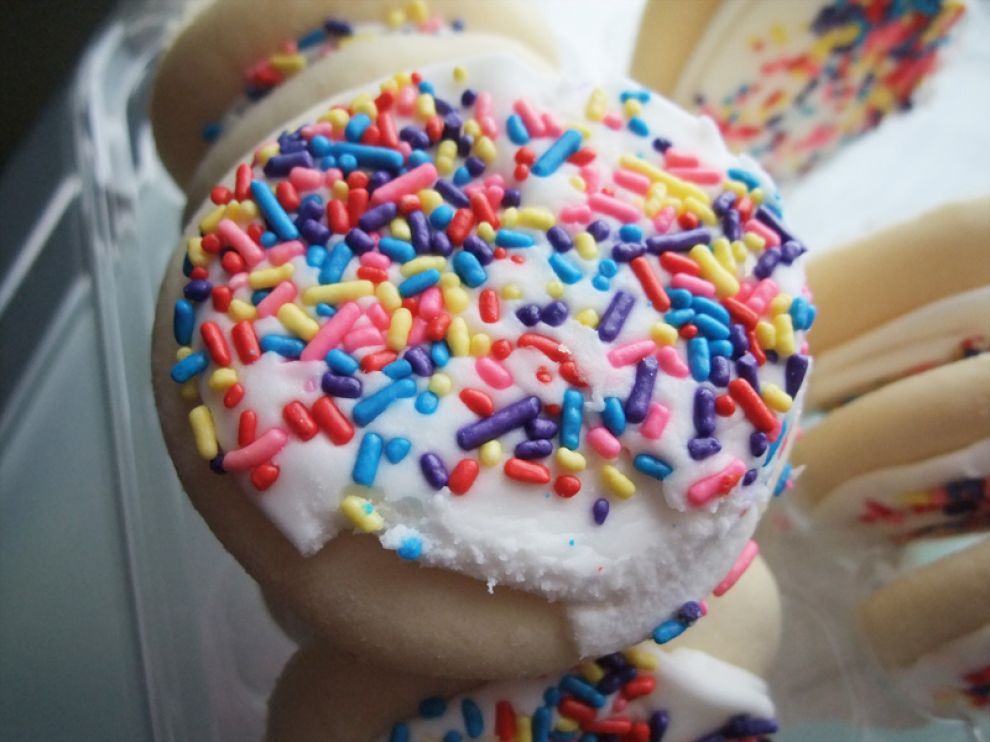 For the past few weeks I’ve been monitoring my energy levels. The goal: to correlate (or not) my most productive days with the energy brought by good waking and eating habits. It took a failed experiment to experience a sugar crash to turn me onto the possibility that it’s my own belief that is the puppetmaster pulling my productivity string.

I’d gotten the ritual down to this template:

This worked really well for me, especially when combined with constant journaling; it works for me because writing helps focus my thoughts and provides a short-term memory boost. This is possible because I can type almost as fast as I think, without having to look at the keyboard.

Despite this success in process improvement, I kept experiencing a continuing fatigue while working that didn’t go away. Although regularization of the sleeping pattern and a protein-rich breakfast had stabilized my working day, I was still not pushing along consistently. I often would fall asleep around 3PM and slept for an hour or more, which made it that much more difficult to stick to the sleeping schedule.

The whole schedule finally collapsed a couple weeks ago. Rather than just hop back on, I have instead been documenting what it was like to be back in the doldrums of unscheduled time. And, I have to admit, my internal motivation was not up to the task of maintaining sustained effort.

I contemplate this latest setback, and came up with a set of working assumptions:

I thought this was a good plan: forward-looking, but grounded in process that I know are low-cost and productive today. But there’s a problem: my own lack of consistency. While I felt I was on the way to getting it together, I suspected that improved diet and exercise were the next frontier. Before I could put that into effect, my impulsive nature threw me down a different road.

Going to sleep around 10PM is really tough for me, so I lately I’ve tried reading books I’d been putting off before I go to bed. One of them was David Linden’s The Accidental Mind, which goes into considerable detail about how our brains are NOT the product of perfected design, but are instead a shaky stack of newer systems built on top of older ones, all constructed out of cells called neurons. Neurons use electricity to move signals around, but are chemically-triggered. The chemical energy to operate these triggers are provided by glucose, which is a simple sugar that the brain consumes for its energy needs. This had been on my mind when I tried to think my way out of an ice cream coma. Admittedly, it was a silly thought: that by thinking really fast, I might burn up all that sugar I’d just ingested. But amazingly, it seemed to work! And id had been exhilarating trying to think as fast as I could, processing as many ideas and senses as I could. When trying to duplicate the feat later, I fell quite short of my earlier high, and I began to wonder if my brain was actually fuel starved. Now, I’ve been avoiding sugar and “bad carbohydrates” as responsibly as possible. As I am at risk for diabetes, it seems like the prudent thing to do. That brought me to the following dilemma:

When faced with two variables like this, the first thought is of course to find where both variables contribute the maximum well-being: is there an idea amount of sugar, eaten at the right times, to maximize brain horsepower and minimize sugar crashes? That entails gaining a sense of how the system responds to different levels of input; after that, I might be able to increase my tolerance to sugar by losing weight and exercising more. For the first time, I had a direct link to mental clarity and exercise that I was willing to follow. Low brain function was KILLING my productivity. 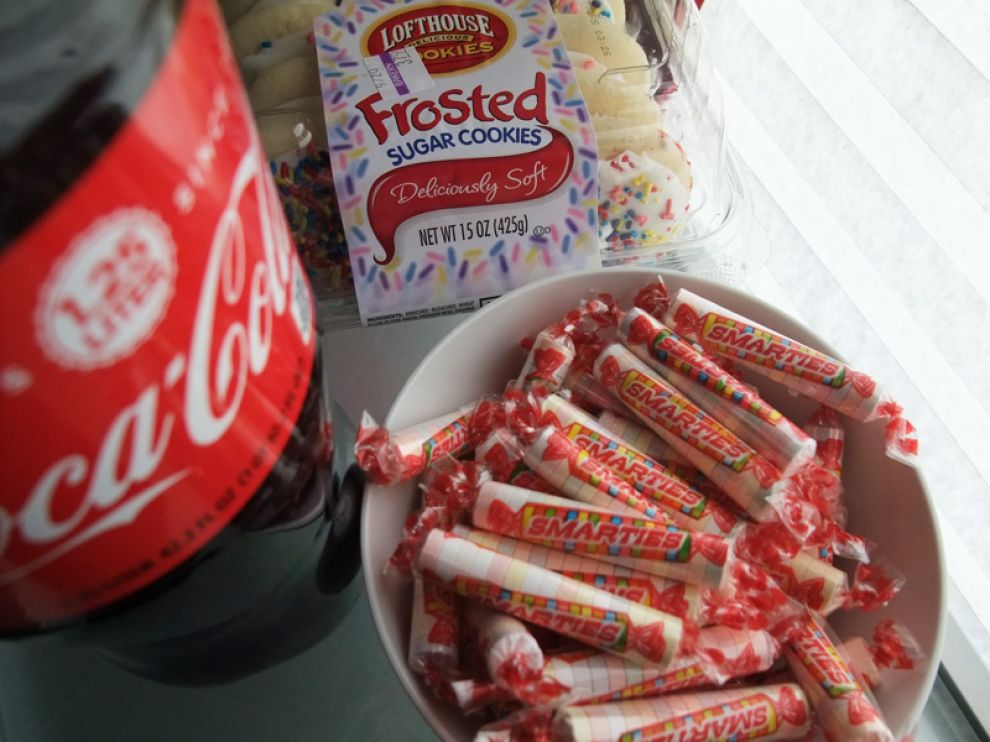 So that evening, I went to the supermarket and bought a liter of Coca Cola, a box of 12 frosted and be-sprinkled sugar cookies, and a whole bag of Smarties® candies (the appropriateness of my choice was not lost on me). I wanted to know just how long it took for sugar to knock me on my ass, and what quantity was necessary. So, I made sure I got a good nights sleep, and then on an empty stomach started a day of sugar ingestion, which I documented minute by minute until I lost consciousness. But instead…I didn’t crash. I remained perfectly alert, with the exception of some headaches. In fact, it seemed that if I could withstand the first 45 minutes of eating the sugary stuff, I was just fine. I was also working on some website stuff for a client at the same time, so perhaps the sugar was actually being used by my brain somehow and not “shocking” my system into helplessness. Hm. The next morning, I saw that commenter “jb” had pointed out that sugar crashes are a myth, which poked a huge hole in my underlying understanding of the processes at work in my body. Apparently, a healthy body can process sugar just fine. The only people who have problems with it are diabetic, and the symptoms they describe are not like the arch-typical sugar crash at all. The data wasn’t adding up.

Analysis II: A Testing of Belief

On the one hand my personal experience in the past 10+ years with sugary foods has been that they make me sleepy, fuzz out my brain, and generally contribute to the malaise that drags down my productivity. My assumption was that I had to watch what I ate very carefully to maintain peak mental clarity. Without that, my desire to build a satisfying array of financially-nourishing productivity products would never come to fruition. And yet, yesterday I’d eaten amounts of sugar I have avoided for years, and didn’t suffer too badly from it. Perhaps I hadn’t pushed hard enough, so I ate candy all day and remarkably, my mind remained clear. While I did fall asleep on the couch, it was because my mind had stopped working while I was there. Was it possible that the main contributor to my mental fatigue was due to a kind of reverse-placebo effect? JB, through an email followup, had observed that it was amazing how what we believe tends to set our reality. While I didn’t regard myself as susceptible to that kind of correlation error, mistakenly assigning cause to the wrong thing, I had to admit that in this case I might actually be fooling myself. If I wasn’t having mythical sugar crashes or insulin-related disaster, what the heck was making me get so damn sleepy all the time?

p>Either theory was plausible, but one thing didn’t seem to fit: during my two sugar days, I’d actually felt pretty good. I had even taken apart the carburetor I’d been ignoring for the past two years for a good cleaning. All day, I hadn’t experienced any of the headaches that usually accompany the doing of unpleasant tasks. Was that the mythical sugar high? What else could account for the mental clarity I’d felt for those two days?

There was just one thing I could think of: my mind had been completely engaged. It was only when my mind was not engaged (sitting on the couch, doing nothing) or facing a task that it found boring or inconvenient that I experienced headaches or sleepiness.

The Power of Positive Thinking, Revisited

In other words: my attitude toward my work was entirely responsible for the litany of aches and pains that “prevented” me from thinking clearly or starting projects. YEARS of procrastination suddenly snapped into sharp focus. My own brain was undermining me again, like a toady manager who kisses ass to the bosses upstairs while blaming all the problems on his team. WTF!

I expressed the thought more positively on August 26 in the Wave with Colleen (and yes, we are still using Google Wave in 2011):

[…] some of the big inputs I thought were things I needed to battle–social time, avoiding sugars, getting sleep–are actually not significant in the light of feeling like I’m in control, confident to be what I am, and (this is the newest) having a great attitude toward boring work.

This is a major revelation. In the days since then, I’ve been monitoring not what I’ve been doing, but my attitude toward the work. Reframed in the context of attitude, the little rituals that I have been coming up with–copious journaling on the new process blogs, sharing my design work as much as possible–have been entirely about redirecting what I would ordinarily regard as onerous into something that I regard as meaningful. For example, when I am not particularly excited about learning how to write a piece of code using PHP, writing about HOW I’m learning the stuff transforms the chore into an act of content creation, which is something I do love doing.

And having recognized that it is bad attitude that is generating all that resistance, I can actually skip some of the writing and stop the negativity before it starts.

Learning to develop a great attitude is, I believe, at the very heart of accomplishing what we want in the manner that will bring us the greatest satisfaction. It is also the missing guideline that binds the HOW, WHAT and WHY of what I do.

While this is not a new insight by any means–there have been plenty of studies that show how high morale in the workplace leads to increased productivity, and the whole notion of the “power of positive thinking” is a well-worn trope–the concept of designing systems to maintain and encourage “great attitudes” is a MASTER PRINCIPLE. It neatly bundles notions I have about my personal philosophy, psychology, and the nature faith into an interesting little package that I can work with.