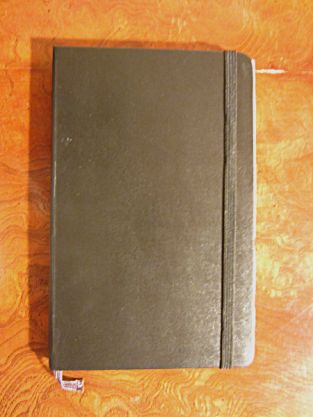 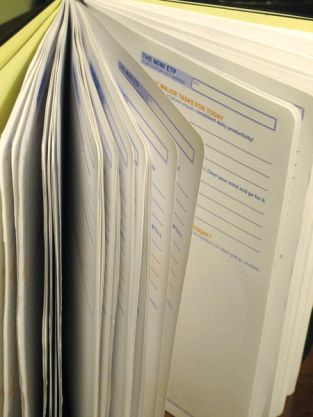 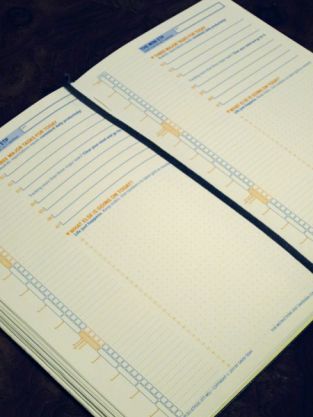 Tom Atwood, who had purchased the 7-task version of the half-size ETP form a few months ago, bound and reloaded his own Moleskine version using instructions from the Internet. Sweet!

A while ago I’d made a few extra variations of the Emergent Task Planner for sale as a digital download. I’ve gotten one or two sales a month from them…nothing big, but I am a believer when it comes to putting new things out in the world to see what happens…

I got this inquiry from Tom a back in June:

[…] Quick question on PCEO-ETP03C-0T7-USMINI-2UP-D2….. I need to reduce it a little so that I can create signatures and use them to refill a Moleskine Journal, what’s the best way to do that?

DAVE (intrigued by the bookmaking process)

Oh, that’s a tough one…probably no easy was of shrinking it yourself unless you have Adobe Illustrator CS4 or better. Tell you what: tell me how much the size needs to shrink, and I’ll make you a custom version of it. In exchange, send me a nice photo of your refilled Moleskine Journal when it’s done! I love pictures of stuff like that!

Cool. Will do. Ok, I reduced it 96% on the printer, pulled a signature out of the moleskine and compared.. After trimming 5/16″ off each side, and 1/8″ off top/bottom, the outside edge of the graphic would be pretty close to the page… ideally the inside edges (where I’ll bind) would be 1/8″ closer to the line. Then I think it’ll fill up the page nicely (look like it was meant to be in the moleskine). I measured each page of the moleskine– I think it’s 5 1/8″ wide by 8.125″ tall. The cover is 5.25″ x 8.25″ so I have some wiggle room with trimming. Also I need a version that’s 2 up, 2 up…. for some reason 2UP-D2 always prints with the second page down. Is that by design or perhaps it’s this printer at work? Wouldn’t be surprised if it’s the latter…. I’ll go to a printer anyway as I want a little better paper than we have in the office.

Ok, great! I’ll see if I can make a version really quick. The second page down probably is due to your printer…office printers have registration issues, and are often off by 1-3mm in their paper handling. I’ll double-check the file, though, to make sure it’s correct. You should ask your printer guy what the tolerance is for the printing they can guarantee, just to be sure. Ok, give this a try! Send me a picture when it’s done! 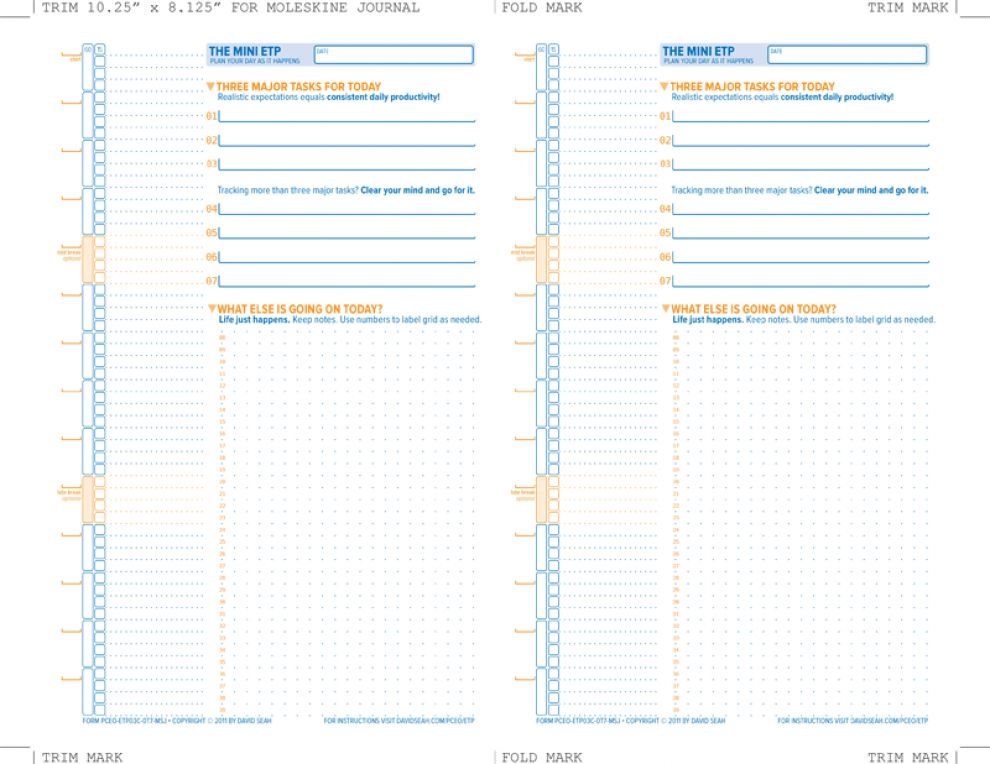 Awesome. Spot on. It’ll work great. Ok, I need to get some thread, needle and glue. Or see if the local bookbinder will do on the cheap. Here is what I’m doing: http://www.trumpetvine.com/sketchblog/moleskine-reloaded/ (ed note: the shown URL is displaying a malware warning on my blog, so I am redirecting it to a similar page on notebookism.com) But I’m doing it with some standard executive paper at FedEx Kinko’s which seems to hold up well with sharpies. Paper is in-process now…. I hope to have something next week depending on my ability/in-ability to sew.

Today I got some first pictures. It looks great, and now I want one! Hopefully I’ll get some better pictures from Tom; will update this post. Here’s some more notes from Tom:

Specifics are: 4 8.5 x 11 pages per signature and 8 signatures in the moleskine… so, 128 pages…. a lot depends on the thickness of the paper. Next time I’ll sew with actual tape on the spines for extra strength… although it’s plenty sturdy as is with just thread and glue. Added my David Allen GTD Workflow laminate to inside front cover and some business card and other plastic holders at the back.

Thanks for sharing, Tom!