An Incremental Change in Identity

SUMMARY: Dave buys a new typeface to use for his business identity and in his form design, because it makes him happier than stuffy old Helvetica Neue.

I’ve been working on the smaller-sized versions of the Emergent Task Planner with 50-plus testers who have kindly volunteered their time. The upshot of this is that I’m looking at an awful lot of Helvetica Neue, the typeface that I use for most of my productivity forms. It’s a slightly more refined version of the old workhorse typeface Helvetica. Since I tend to like denser data layouts, it’s Helvetica Neue Condensed that gets put to work. However, I’ve always felt that there was something about Helvetica Neue that bugged me, so I’ve been open to finding alternatives.

Enter Proxima Nova, a typeface designed by freelance graphic designer Mark Simonson. I stumbled upon it a couple of days ago, and it instantly caught my eye. After sleeping on it, I dug out the business credit card and purchased the Proxima Nova Condensed font pack (with the @fontface license as well) through FontSpring. I’m mentally committed to making this my new go-to font for work and my own business identity. I perhaps should have researched it a little more thoroughly as far as typeface trends go, but I figure it’s GOT to be an improvement over Helvetica, so I bit the bullet and went for it.

So what did I actually get? Here’s a side-by-side comparison (click the image to see a clearer PNG file if this looks too blurry to you): 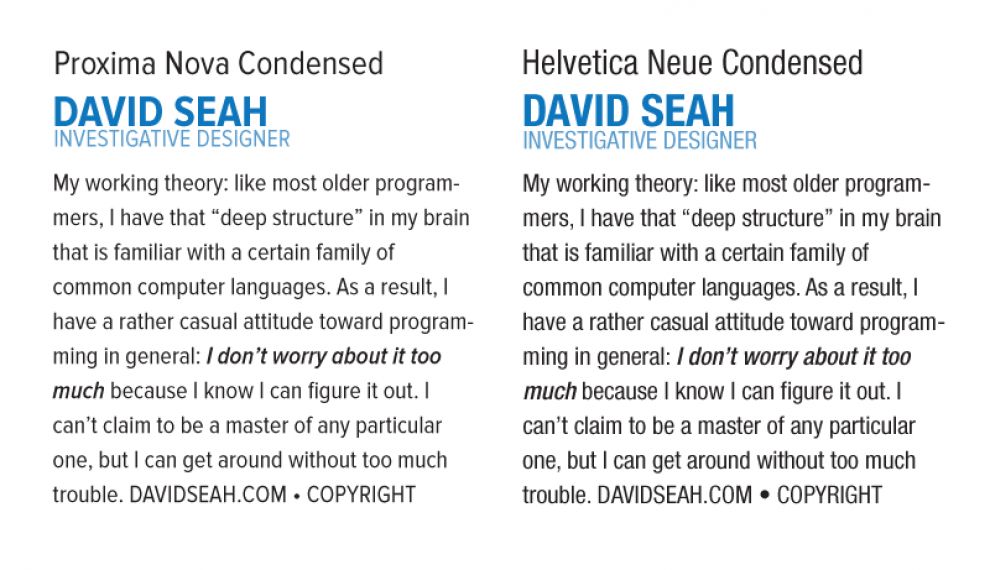 Warning: I am going to describe qualities of these typefaces that will be invisible to the casual observer. While I’m only an average typographer, I’m highly aware of the way visual elements make me feel; this is what I will attempt to convey.

On first glance, both typefaces are fairly similar. Perhaps the most obvious difference is that the letters of Helvetica Neue Condensed (right side) look more squished.

Looking a little further, I find small details in Helvetica Neue that just don’t sit well with me. While it is an attractive font overall, it feels just a hair “pretentious”. The capital letter ‘R’, for example, retains a vestige of pride in the way the end of the tail curls up. The squished letterforms makes the letters look taller and thinner, which conveys a sense of data density and straightforwardness I like, but it also creates distracting vertical movement; in other words, I want to look up and down, not left and right, because it looks like each letter is stretching upward.

Then there are certain letters that bug me. The big dot in the “DAVIDSEAH.COM * COPYRIGHT” line at the bottom, for example. GIGANTIC and it attracts too much attention to itself. And I have always hated the colon in Helvetica, which looks like cheap stitching on an otherwise nicely-proportioned pair of leather gloves. And don’t get me started about the oblique characters (I don’t worry about…), which visually don’t really seem to belong. They are awkwardly tilted into place, and the proportions don’t match the feel of the regular characters. I find it pretty jarring. Ugh.

The Proxima Nova Condensed (left) letterforms, by comparison, are more visually rounded. It is less squished, and I think this is due to the slightly lower x-height (the ‘top’ of the lower-case letters compared to the top of upper-case letters). Because it’s less squished, the text visually flows left-to-right as it should, without the distracting vertical bias. At least, that’s how I see it.

I also think the letters of Proxima Nova Condensed flow together more smoothly, with more unified proportions from letter to letter. Compare, for example, the word “common” in the fourth line of the paragraph text. The Proxima Nova version is quite pleasing to my eye, but the Helvetica Neue version looks like the ‘mm’ characters are swollen; I’m not a fan of the Helvetica Neue ‘n’ either. Another improvement is the use of “real” italics, as opposed to the “slanted” version in Helvetica Neue. The colon, while still kind of bugging me, looks a little more integrated into the neighborhood, and the type color just seems much more even overall.

Helvetica is one of the first commercial no-nonsense fonts to come into existance, and it’s no slouch in the “lack of superfluous ornamentation” school of design. However, there are little things in the letterforms that remind me of old world machine tooling. The shape of the S, for example, looks like it was hand-shaped on wooden molds by hammer-wielding craftsmen; there are some interesting compound curves in it. The R, as I mentioned, drives me a little crazy in Helvetica Neue with its wriggly little tail. The lower-case ‘a’ also has something going on, its enclosed part pointing defiantly in a direction shared by no other letters. And what’s up with the lower-case p? It looks like a wombat trying to pass as a cuter animal at the local petting zoo.

Proxima Nova, by comparison, feels more relaxed. Proxima Nova would meet you in the garage while he was setting up the charcoal grill for the BBQ later that night, passing you a cold beer without you having to ask for it. I also think it feels more relaxed because the curves in the letterforms aren’t as tightly formed. The S, for example, is under less tension to maintain its shape, and the shape is simpler too. Proxima feels like common sense and plain-spoken language, whereas Helvetica Neue feels like it has a slightly neurotic edge in the design of its letterforms. It also has a kind of celebrity sophistication because of Helvetica’s long association with the tradition of Swiss / International Style that dominated communication arts. There’s a hint of international drama in Helvetica Neue, while Proxima Nova just gets to work without telling you a story about how his ex-girlfriend doesn’t understand him.

I’m probably reading way too much into this, but I not surprised to see that the type designer is from Minnesota.

Proxima Nova represents my desire to be clearer and more plain-spoken. I licensed the 14 fonts of the condensed family, which cost me US$244.00, but for an additional $67 I also got the web font version of the font for unlimited domains on the Internet. That means I can incorporate the type into my webpage and maintain some visual consistency. I made sure that the licenses allowed me to use the fonts for creating my PDFs (allowable if the PDF is uneditable); as I’m planning on selling more products in the future based on PDFs and print, I think it’s important for me to be using licensed fonts to make sure I have that covered. I probably could have found Proxima Nova as a free download somewhere, or transcoded into a poor-quality imitation, but as an entrepreneurial creative professional I believe that I should be buying my tools from people like me. What goes around comes around, you know…if you want to make money selling something you’ve made, you should buy your tools legitimately.

From a function perspective, Proxima Nova carries all of the word-density capabilities of Helvetica Neue, and it’s also more legible. It has real italic letters, and is available in a broad range of typeface weights and sizes should I need to expand. There’s also something a little bit 20th century about the typeface design with an additional sophistication in the way the letters are “fitted” to each other, like a curated collection of modern furniture. It also feels more approachable, instructional and factual, which are qualities that I would like my own products and services to have. Helvetica Neue Condensed can be a little overbearing because it’s associated with governmental graphics (signs, tax forms) and snooty art magazines.

What it really comes down to is this: I just really like the typeface, and I find that it gives me a little thrill of pleasure everytime I look at it. I still like Helvetica Neue Condensed for the period authority it oozes from its association with important design principles from the 1950s-1960s. However, while it satisfied my design needs at the time, it has never made me happy…

Typefaces…they do affect me in strange ways :-)