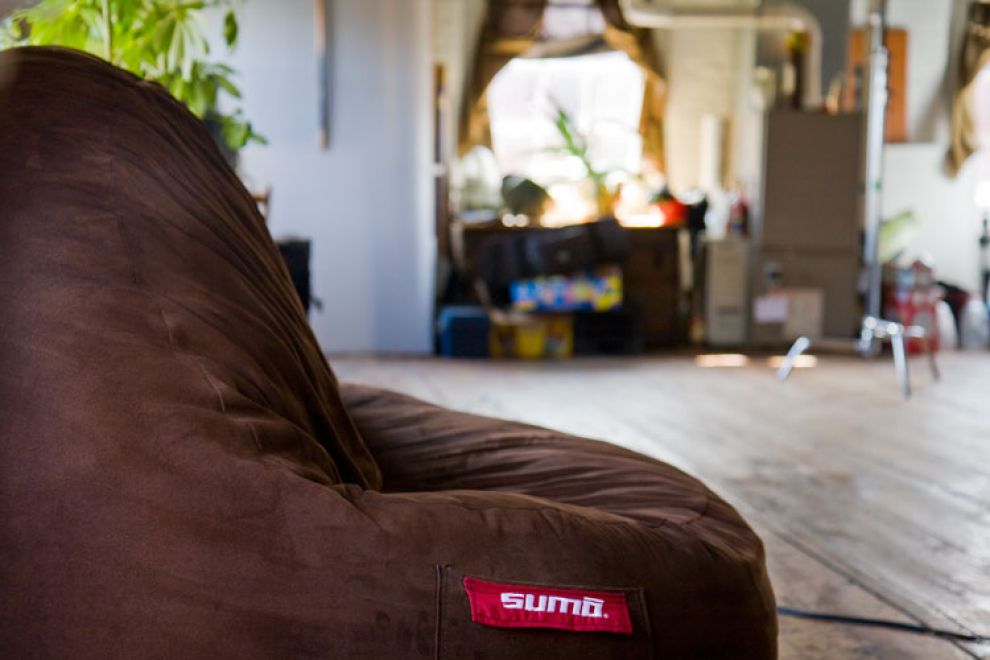 SUMMARY: A few months ago, I got an email from a product rep at Sumo Bean Bag Chairs asking if I’d like to review one of their newest products: the Sumo Sway Couple. I’d had a favorable encounter with their first product, the omni bean bag chair a few years ago, so I said, “Sure!”

I don’t have enough space in my living room for another chair, so my friend Sid at Ceaser Photography agreed to be host for the chair in his studio space. Good thing, too, because the Sway Couple chair–so-named because it’s intended to seat two people–is as wide as a healthily-proportioned arm chair. I had to take it out of the box and stuff it in the back of my Volkswagen GTI, where it just barely fit. 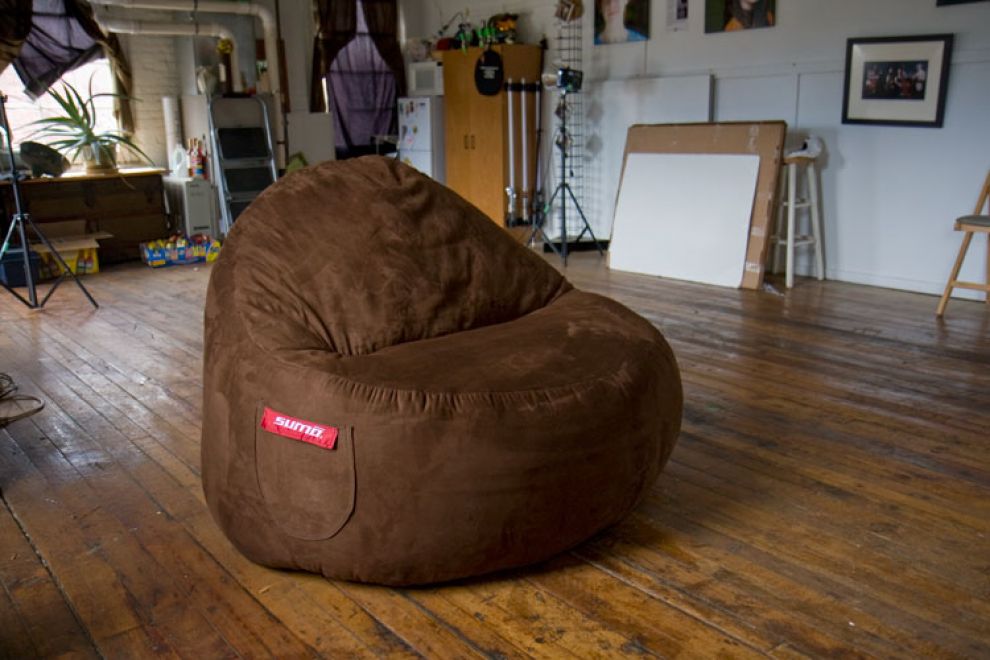 Compared to Sumo’s other bean bag chair products, the Sway Couple is a more “sculpted” chair, with a seat and back molded in. It’s like a boneless arm chair, holding its shape because of the fiber stuffing (not beads) and the stitching of the bag. The upholstery is also different; instead of the slick textured plastic of the Omni, the Sway Couple comes in corduroy and microsuede. 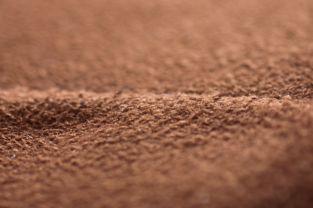 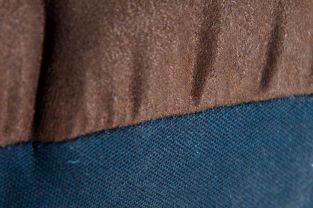 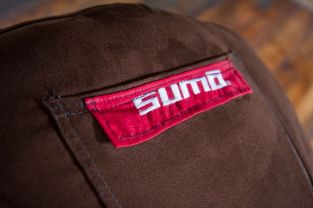 Sid and his girlfriend Sara thought that brown microsuede (picture: left) would look good in the studio, so that’s what we got. On the bottom of the chair is a tougher black fabric (picture: middle) designed to take the wear-and-tear of dragging the couch around, and there’s a side pocket too with the “Sumo” branding prominently displayed on it (picture: right). My overall impression was very positive, and I felt a twinge of regret at not having room for it at home. 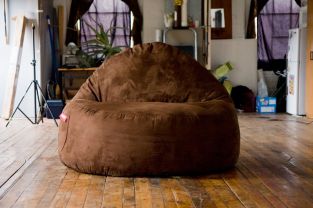 As luck would have it, I had to fly to California for a long project, and didn’t get a good chance to do a proper sitting until a few weeks ago. Unlike the Omni chair, which requires you to fluff it into approximately the right shape to sit on first, the Sway Couple is ready for sitting at a moment’s notice. Once I got back from my trip, I headed up to the studio with my camera to take some shots and gave it a test sitting. After about 30 minutes I woke up and realized I’d fallen asleep in it. It’s a VERY comfortable chair, and in the winter I can imagine it being a nice place to snooze in near a fireplace. Because it’s a “shaped” bag chair, it actually has a back you can rest against. The chair does a great job of holding you in place, whereas in other bean bag-style chairs you have to spend a lot of time constantly re-adjusting your position to stay in the sweet spot of being comfortable and falling too far backwards. Not so with the Sumo Sway chair. 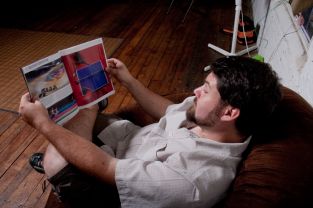 As I mentioned before, it’s the size of a generously-proportioned arm chair; while it can sit two people, it’s still a size where a generously-proportioned dude like myself would feel perfectly justified in hogging the entire thing to himself. Here you can see Sid enjoying the latest issue of American Photo. Sid thought it would be an AWESOME gaming chair, and I would agree…I could see having two of these in a large dedicated game room in front of a 60″ plasma. It’s also high enough that getting out of it isn’t as much of a chore as I found other bean bag chairs; in those cases, I’ve found that rolling out of them is easier on the knees. With the Sway Couple, though, you can do one or two good bounces with your butt and sort of spring out of it. 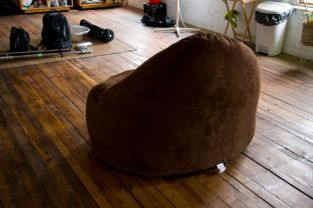 It’s a remarkably firm chair. The insides, which you can see if you unzip the bottom, is made of a dense artificial spun fiber (?) that’s packed in there well. It makes the entire chair’s surface very buoyant as if it was filled with air, but without the confidence-eroding lightness that an inflatable chair would have. As a result, the chair also maintains its molded lines, which I found very pleasing. Functionally speaking, the dense fiber fill also makes the chair very supportive. I (sadly) weigh well over 200 pounds and at no point did I feel that the chair was going to have a problem supporting me by tipping over or shearing in one direction or another. It’s pretty cool. It isn’t as stable as a traditional couch or chair, of course, so I wouldn’t want to eat a TV dinner while sitting on it. But for lounging around and chilling out? Pretty darn ideal. However, since the fiber fill acts as a kind of insulation, the chair can get pretty warm as with any padded chair. Since there’s more padding holding you in, I have noticed that I get warmer faster in this chair than a regular armchair. 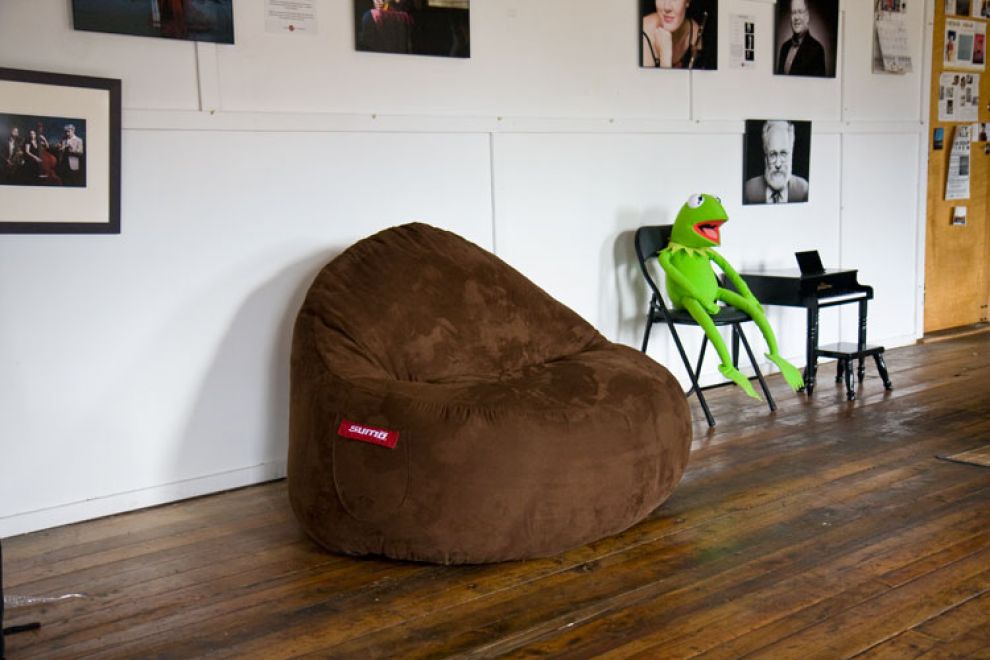 I’ve had a couple of naps in the chair since writing down my initial impressions, and I still like it. Maybe the one drawback in this regard is that micro-suede tends to vary in its reflectiveness depending on the direction you brush it. If you like your furniture to look pristine all the time, that might bug you. I imagine the corduroy version wouldn’t have this “problem”, though I haven’t seen a sample.

Note that this is a larger piece of furniture than you might think…it’s not like the underwhelming bean bag chairs of the 70s and 80s. You should plan the placement of this chair accordingly, allowing for more space to the sides and front. The seating position is also lower than most traditional furniture, so that’s something to consider.

If the Sway Couple is too much chair for your space, it also comes in single person size (the Sway Single). Both chairs are available in a number of colors. When I redo my basement office, maybe I should get rid of the couch down there and replace it with one of each of the Swap chairs. I like how it holds its shape compared to other oversized beanbag chairs, and it’s easy to drag around.

Where to Get It