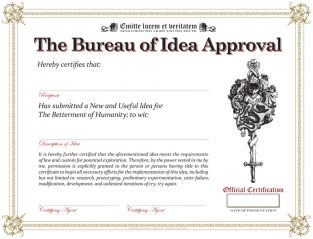 Amanda Pingel emailed me the other day about joining her Bureau of Idea Approval by submitting a design for a certificate.

The Bureau (or BIA) is something that Seth Godin wrote about in Tribes: wouldn’t it be great if everytime we had an idea, there was some official body that somehow made it OK to pursue them?

For those of us who need the looming authority of an external agency to take action, the Bureau officially serves you in that role. In fact, Amanda has taken on this responsibility herself so you don’t have to. But you’re not completely off the hoo; as Amanda writes:

I also hereby deputize you into the Bureau of Idea Approval. Whenever you hear an idea that’s worth spreading, present its creator with a certificate. Whenever someone approaches you to ask your opinion of an idea, give them a certificate when you tell them to give it a shot. Whenever a loved one is ready to surrender to the threat of an invisible mallet, give them a certificate saying that their idea is a good one. Let’s make this world a more idea-friendly place.

I’m all for self-authorized changes, so I adapted my old Chain Mail Breaking Certificate design to fit Amanda’s prose. You can download the Bureau of Idea Approval Certificate over at Amanda’s site, print it out, and post it up somewhere to show that your pursuit of ideas and any failure that may result from it is officially sanctioned by The Bureau.