What Would John Wayne Do? 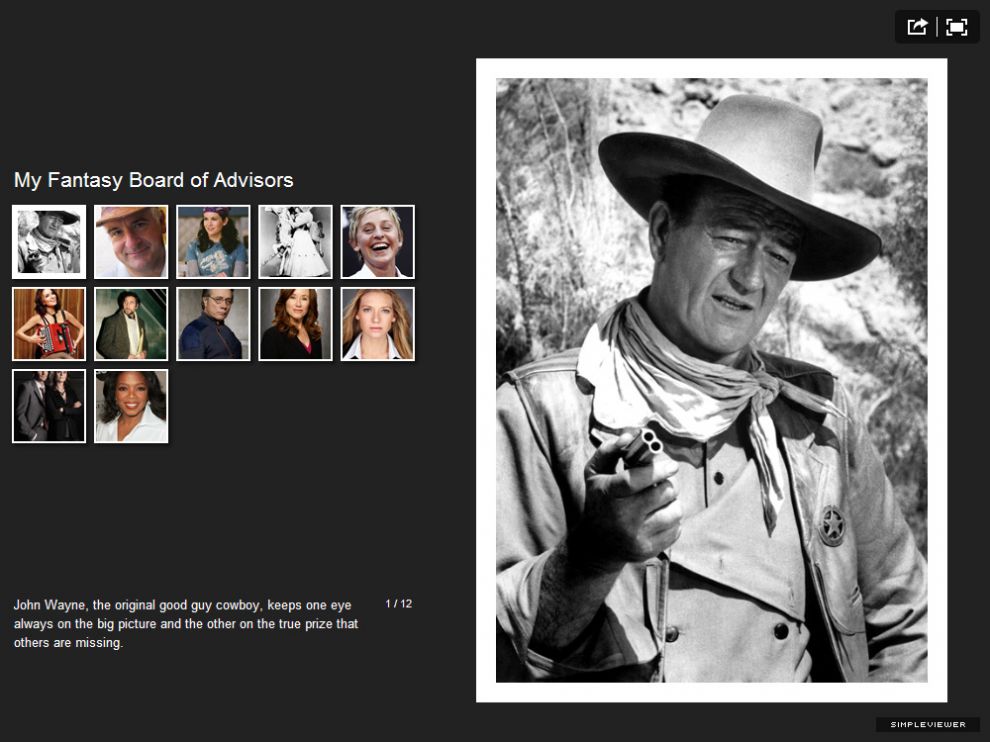 SUMMARY: Need perspective? Why not create your own Fantasy Board of Advisors?

The other day I needed some additional perspective on my current activities, and I found myself staring blankly at the wall of pictures in my office. I put up these pictures a year or two ago, and it’s comprised of close family and friends. Its purpose is to remind me of the importance of community and that I am part of it; I find this to be rather reassuring, and it helps me set priorities. However, when it is time for action I usually end up thinking about what I would do given my limited perspective. As it happens I think I’m rather good at it, but I have to admit that there are limits to what my System of One can achieve by itself. But what if I created a new photo wall of heroes that I could look up to? The idea fell out of something that The Communicatrix and I were jabbering about on Google Wave as we were discussing Pam Slim’s Personal Jedi Council concept. I loved the idea, but I was finding it difficult to think of people to fill the seats on my Council. So instead, I cobbled together a rag-tag assemblage of people–some fictional, some real, and some dead–that I could imagine asking for advice. Thus was born my Board of Fantasy Advisors. I scoured the Internet for interesting photos that captured what I liked about each person, and put them in small wooden frames. It’s also nice to have them online, so I combined some workI I was doing with the sexy-free Flash-based Simple Viewer and made a Gallery of Awesome Peeps.

Here’s who has made the cut so far:

I’m not exactly sure how I came up with this group of 13 people, but they each represent some archetypical value that is important to me. And it’s important to note that each archetype is based on unsubstantiated belief; these people could be completely unlike how I imagine them to be, but since they are representing IDEALS, I don’t think it’s a problem so long as I maintain a clear distinction between the real person and my archetypical presumptions. Besides, it’s fun to look at.

Filtering my thoughts through those of another person—even an imaginary one—can come in handy. It broadens my perspective in ways I ordinarily would not have considered. And, these are all people, fictional or otherwise, that I would not to let down due to my own inaction.

Go ahead and check out The Board. The link that is in the upper right corner of the screen points to th URL of the site providing my source photos. I’d love to hear suggestions for people I’ve missed.