One of the Agenceum clients had a cool swirly glass sculpture that she likes a lot, so we tried turning it into a logo! She uploaded some photos of it, and I traced it with the last released version of Macromedia Freehand (circa 2004) instead of Adobe Illustrator CS4 (circa 2009).  Why? Because I saw a couple of videos, Illustrator vs Freehand and Illustrator vs Freehand Round 2, that reminded me how much I used to like Freehand for its power and ease in creating artwork. I switched to Illustrator back in 2005, and have been using it for my vector art needs since then. I’ve never really felt comfortable using its pen tool, though. How would going back to Freehand feel? 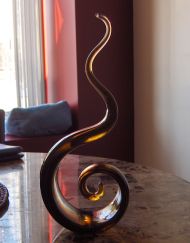 Here’s the original photo. Since the image wasn’t taken “straight-on”, there’s some perspective to deal with. No matter, though…I just wanted to capture the “feel” of the shape. 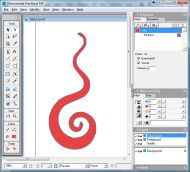 One immediate feeling I noticed: it was much more relaxing to trace the shape in Freehand because there was no fear of screwing up. You can move points as you draw and the bezier curves are auto-drawn in preview without having to commit to placing a point. Because of this, I was able to trace the entire shape in one go. In Illustrator, the experience is more frustrating because points can be moved only after you’ve stopped adding points to a curve, so if you placed one badly, tough look…live with it for now. Nudging all those points to smooth them out is a royal pain in the ass, particularly because Illustrator doesn’t have the “auto handle” feature that adjusts the bezier handles as you move a point around. Anyway, after I got my basic shape down and smoothed it, I applied the simplify filter and got a very nice minimum-point shape that smoothed out all the curves nicely. 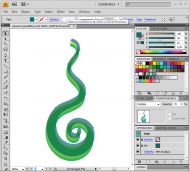 Despite Freehand’s superior vector tools, compositing and setup is easier done in Illustrator now because I’m more used to it. I saved the Freehand document and loaded it directly into Illustrator. Since it’s just basic shapes, there wasn’t any import problems. I converted the document to CMYK and used some of the Freehand blend modes to create a simple effect. I need to make sure this actually prints correctly from PDF; the use of blending and transparency modes sometimes cause problems with commercial printing places.

Total time from start to finish was about an hour of goofing around. I think I saved quite a bit of vector trace time by using Freehand instead of Illustrator to start; refining the same shape in Illustrator CS4 would have taken a lot of tedious nudging and adjustment. However, I should look into an alternative trace methodology that is just placing points and creating straight line segments, and then simplifying the shape with the Path->Simplify command. This results in a curved approximation of the segments, which would look pretty nice. I’ll try that on the next shape I need to make.