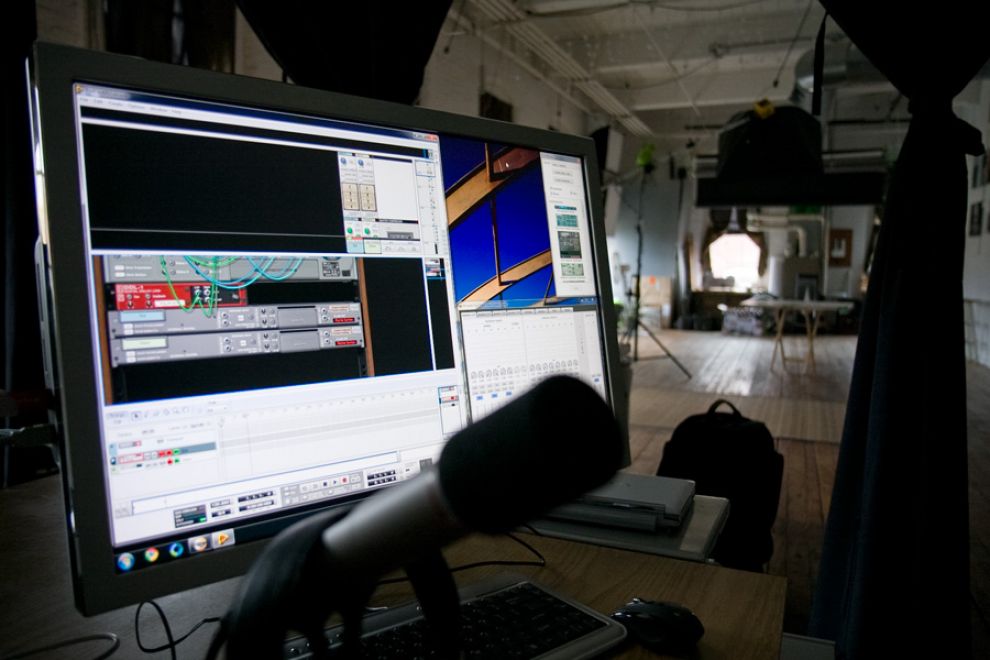 Back in October, I started a podcasting experiment with portrait photographer Sid Ceaser. We didn’t have any specific goals other than to see what it would be like. Sure, I was excited for the chance to play with new gear and put some old software to work. And I was pretty sure that Sid and I would finally get some good rants recorded that could bottle the energy we have to prodding each other to make stuff. Figured it could be good stuff.

The format, such as it is, is just Sid and I sharing stuff that we’ve heard about for an hour. We turn on the microphones at the studio, Sid’s working at his computer editing photos while I handle the recording, and we shoot the breeze. I then edit the material down into 30-40 minutes. When we have guests, the podcast is longer, stretching to about an hour total.

When we started, we didn’t have a clear idea of what people would be interested in, so we just talk about what we find interesting while keeping our invisible audience in mind. We seem to naturally try to explain references that people may not understand, though we don’t catch every reference. We don’t script or write any dialog, so what comes out is what we are saying off-the-cuff. Fortunately, Sid is very good at doing this while being entertaining, and he’s a good balance to my tendency to wax philosophically. After doing five podcasts, we are starting to catch our rhythm. It helps also that Sid has listened to many podcasts before, and has gained an intuitive sense of how the format should be. As for myself, I don’t listen to podcasts except for *Wait Wait Don’t Tell Me at the gym, so that’s my standard for pacing. I lose patience with longer podcasts that take a long time to get to the point, so when I’m editing ours I have this mental image of a giant cane ready to yank us off the stage if we indulge ourselves too long.

There are a few problems with not having a script, like the way we “um” and “ah” a lot, stutter, repeat phrases, and use nonsensical grammar at times. When we started, I wanted to edit very minimally to keep the podcast as “real” as possible, but very podcast has a few pieces where we’re grasping for words and it’s aggravating for listeners to wait for us to get to the point. My editing philosophy for podcast 4 and 5 has been to edit for listener comprehension and clarity while retaining “the feel” of a natural conversation. To that end, I leave in as much of the ums and ahs as possible unless they produce confusion, which produces a final product that I think is faithful to how we talk, bad grammar and all, without forcing listeners to listen to long seconds of brain freeze. As both Sid and I become more aware of the demands of recording, we’re getting better at controlling our lip smacking, repetitive stammering, and attempt to fill the air with noise. We’ve gotten some good tips from people on “slowing down” so we don’t talk faster than our minds are capable of thinking.

I had originally thought we would be talking a mix of productivity, entrepreneurial projects, and other experiences from freelancing for a universal audience, but we seem to be drawing from local happenings. While I think this limits the appeal of our podcast to a general audience, it nevertheless is “real” and I think over time we’ll figure out how to balance it. Our audience currently is, if I were to guess, comprised mostly of Sid’s associates. When I meet some of them, they recognize me as “the guy from the podcast, I can’t remember your name”, which is pretty cool in a way.

The topics we cover are drawn from the people we know who are doing cool things, and we like to share our enthusiasm for people doing any work at all that moves them forward creatively or artistically. We like that we get to talk about artists who are unknown to the public, and this has given our podcast a regional flavor.

Sometimes the topics get a little more serious, such as the struggle of the freelance artist and the difficulty of promoting the arts in smaller cities like ours. At other times, we break into sillier discussions about food or movies. When I’m editing the final mix, I keep in a bit of each to maintain the pacing and interest while informing the audience, but I try not to let it get too deep into “nerd only” territory where we debate nuances that a general audience wouldn’t find interesting.

We record the podcast in Sid’s studio (photo above), using a motley collection of microphones plugged into my computer through an M-Audio FastTrack Ultra audio interface. Everyone gets their own microphone recorded on their own channel, which gives me the ability to balance the final podcast so we all are at approximately the same volume. I capture the audio directly into a program called Propellerhead Record, which is designed to be simple for everyday musicians to use in creating final mixes for their music without sacrificing expressive power. It’s a nice piece of software from a company that’s known for making rock-solid music software, and it’s complete overkill for making a podcast. Initially, I tried to do things relatively simply by recording with GarageBand through a Yamaha Audiogram 6 audio interface. I wasn’t planning on doing complex editing, and thousands of people use GarageBand, right? As it turned out, GarageBand can handle multiple inputs just fine, but is pretty awful when it comes to editing more than one track at a time; the tools are quite primitive. On the hardware side, the Audiogram 6 handled two microphones fine, but that was the maximum. As a USB 1.1 device, it was also limited in how quickly it could capture data when other USB devices were connected to the computer, and our first podcast recording was extensively marred by the digital dropouts that occurred. Rather than debug the hardware, I returned it and got the FastTrack Ultra, which is USB 2.0 and can handle 8 simultaneous digital tracks at once. By the end of the first podcast, I knew I wanted to have 3 or 4 people talking at once, so the added expense seemed worthwhile. As for the choice to edit with Record over something like industry-standard ProTools, I got a great deal on upgrading both my license of Propellerhead Reason from version 2 to version 4 which included Record. After a brief ramp-up period, I found that Record was able to handle my editing needs well. I have the option to go ProTools at some point; I made sure the FastTrack was ProTools compatible.

After the mix in Record is finalized, I convert it to an MP3 file using Sound Forge, another semi-professional audio editing tool. For encoding settings, I’m currently using 96kbps Joint Stereo with variable bit rate, because I like to retain more richness to our voices. Earlier podcasts were encoded at lower bitrates to save space, but they sound kind of tinny. After encoding the MP3, I run it through a program called MP3Tag, which embeds the podcast’s “album cover” for iTunes. The resulting MP3 file is uploaded to my server, and a special RSS feed is created from the posts I make on the podcast blog site. This RSS feed is specially-formatted for Apple’s iTunes store according to their specifications.

I’m still learning how to properly set up microphones and adjust levels. One major problem is handling plosives, which are those popping noises that come with P, T, and Ks. They distort the recording. There are things you can buy called “Pop Filters” that help prevent this, and there’s also ways of positioning the microphone so it’s less likely to happen. Microphones themselves are kind of mysterious. There are dynamic microphones and condenser microphones that come in different sizes, shapes, power requirements, and recording strengths.

The editing process takes between 6 and 8 minutes of work for every minute in the final version; for our last podcast of 52 minutes, I spent about 8 hours listening to, editing, re-editing, and tweaking the final mix from about 2 hours of material. It’s important to me that the final mix sounds like a natural conversation; you shouldn’t be able to hear where I made the edit. If it sounds like one long continuous conversation, flowing from topic to topic naturally, I’ve done my job right.

I know that we’re going to keep doing them, perhaps one or two a month. The major holdup with doing more of them is the time it takes to do the edit; as we get better at speaking on-the-fly and making sense, the amount of editing required should probably lesson. I may do some side-podcasts for material related to this blog, but we’ll see.

If you haven’t heard the podcasts, you can check them out on the Sid and Dave UnNamed Podcast Site, where you can listen to it online or download to your computer. You can also go directly to the podcast page on iTunes if you have iTunes installed.