For the 2011 version of the Compact Calendar, please go to http://davidseah.com/compact-calendar 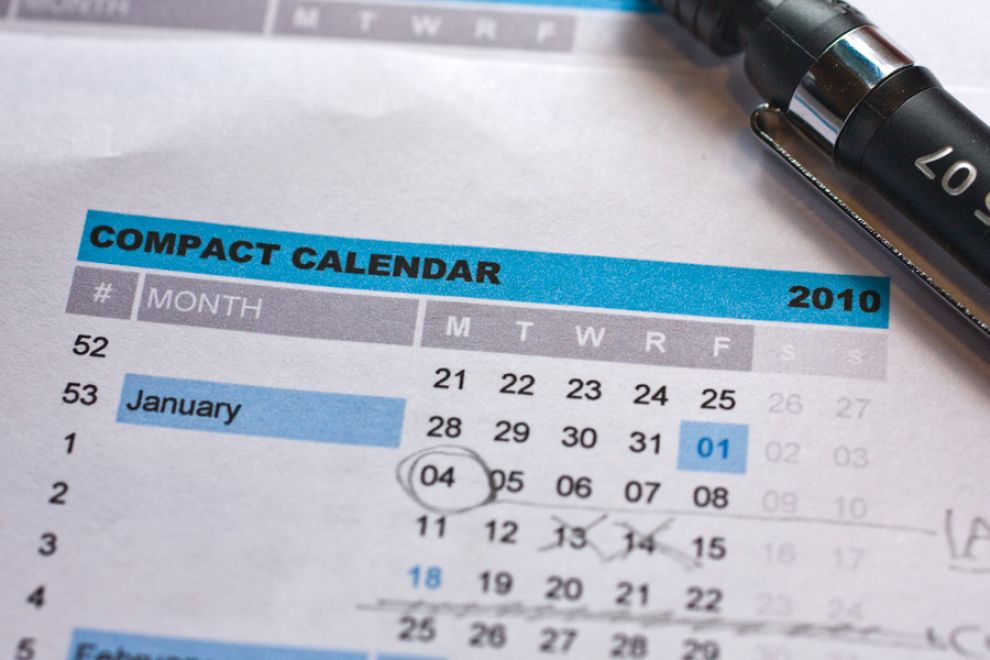 The Compact Calendar is a printable calendar based on an Excel spreadsheet, designed to be easy to use in impromptu planning by yourself or with a group of people.

About the Compact Calendar

For those of you new to the Compact Calendar, it’s just a simple printable calendar created using Microsoft Excel’s date calculation functions and presented like a candy bar o’ time. I pre-print the sheets and use them for “sketching schedules” in group meetings; these notes then become the basis for working up more detailed planning.

This year’s update adds improved first day of month highlighting (thanks Gregor Erbach) and automatically-calculated holidays, so now it’s even easier to update the calendar every year. Missing in this release is the “start any day of the year” support that a reader submitted a few months ago. This would be a useful feature, particularly for schedules that don’t start on January 1st.

I used to do a lot of on-the-fly estimating for proposals and production at various web agencies. The problem with traditional calendar design is that they chunk time in months, not continuous days. When I’m planning, I am trying to answer questions like:

One way to do this is to use a long timeline, like a Gantt chart. All the days line up one after the other in a long horizontal format, which makes it easy to see how long something takes; distance is directly equatable to duration. This is great in theory, but the Gantt chart lacks compactness and is cumbersome to use because you can’t see everything at once.

The Compact Calendar, by comparison, is great for representing a schedule compactly while maintaining the important context of weekends and holidays. In general, we’re trying to fit our tasks into continuous days of work that cross month boundaries; by running all the days together, we can maintain that sense of continuity and still not lose track of what month it is.

While in meetings, I can quickly block out chunks of time for an entire year, marking important days and making detailed notes on deliverables as we’re talking; this provides the starting point for future detailed planning. When I’m doing impromptu planning by myself, I just circle dates and underline ranges, writing notes in the empty space on the right. It is basically a form of doodling your schedule. It’s a great planning tool to whip out during a meeting, so I try to keep a few printouts of this spreadsheet handy to do a quick thumbnail schedule on-the-spot.

The advantages of the Compact Calendar:

The main drawback of the Compact Calendar is that you can’t easily show dependencies or overlapping tasks. It’s also not so good for detailed planning, but you probably would use other tools for that. For example, I sometimes use my Excel spreadsheet version of the Gantt chart, which is much prettier than the ones that come out of Microsoft Project. 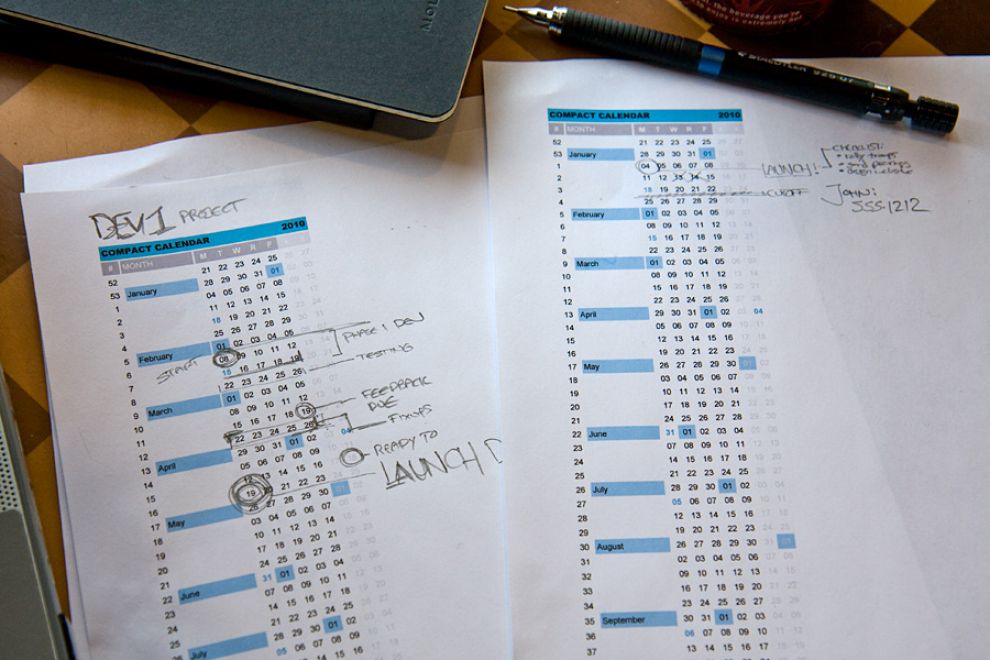 Here’s an example of the calendar in use…click the photo to zoom in!

In general, I use printouts as a thinking calendar, doodling in estimated times and circling dates, dependencies, and deliverables. You can see how I use lines to connect with the notes on the right side of the paper.

At client meetings I can use the calendar to note other dependencies, deliverables, and ask about company meetings and other potential conflicts like vacations. It’s a lot easier to pass the sheet around than a laptop; people can contemplate paper more easily.

After I get things worked out, I will sometimes make a “clean” version of the schedule using a new sheet and give it to the client to photocopy.

When I’m managing other people in person, sometimes I’ll use the Compact Calendar to quickly note their deliverables and the dates on this sheet. I’ll also sometimes point out dependencies, and then they have this sheet they can just stick up on the wall and follow. I find that people just need to know when something is due so they can tackle the work; if they have to read a detailed spec or the proposal to find this critical information just slows things down. Specifics of course matter, but that’s a post for another day.

These versions have been generously created by bloggers around the world. Thanks! If you’ve made a version of the Compact Calendar for your locale and would like to share, put it on a page on your own website and I’ll link to it here!

NOTE: These were provided by generous bloggers around the world who have localized the calendar for their locale, but have not been updated for 2010.

You can find more printable productivity tools on The Printable CEO™ Series page.