Optimizing the Walk, not the Plan

Summary: I’ve been preparing the relaunch of my design business, and have realized that the way I’m doing it may not be suited to my “natural strengths” (now that I have an inkling of what they are).

If this is the case, I need to think of optimal action as applying the skills I have WITHOUT planning, trusting that I have the training to do it right. If firefighters act this way, perhaps I can learn from their example. And this suggests a radical plan of action.

I’ve been quiet lately, and that’s because I’ve been getting my ducks in a row to restart some kind of “design business”, though it might be more accurate to say that I’m just getting serious about doing it right.

To recap: Freelancing was never really the means to an end for me, but it has afforded me the chance to figure out what’s important to me. In hindsight, this freedom was also a tremendous luxury that I paid for with credit cards, missed career opportunities, isolation, and an uncertain future. However, I’ve also accumulated a giant pile of software, gear, and skills that will come in handy for this next phase of development. The recent diagram of my master vantage point is the culmination of this thinking, itemizing my so-called Five Destinations that are likely engines for future growth:

Last week I started to lay out what the Niche Design Business might look like. I ended up drawing a kind of small store, which for me is imbued with the notion of tangible goods in a community context: 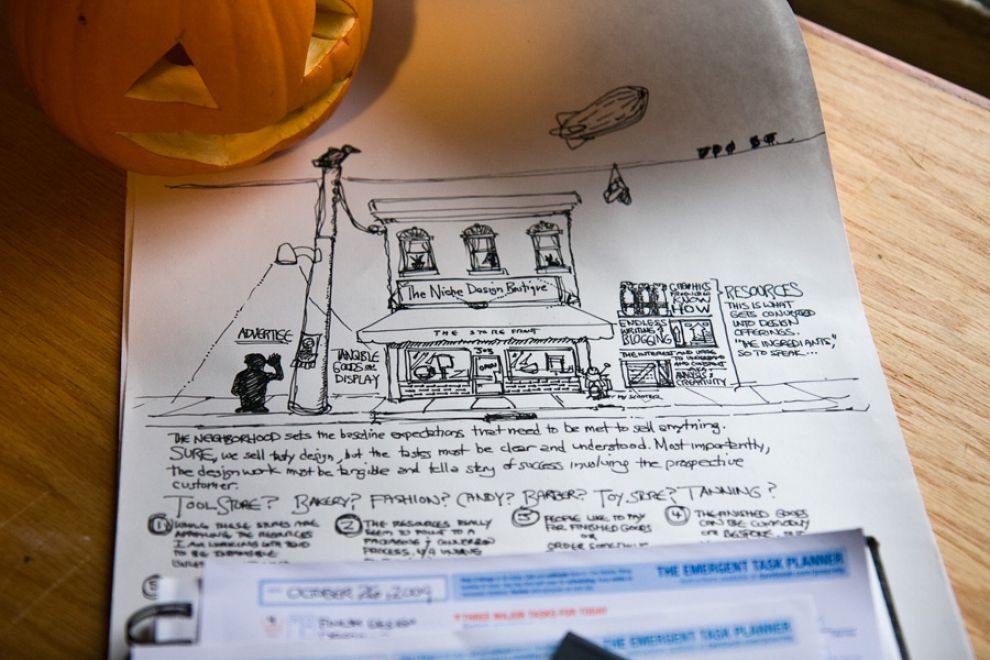 What’s interesting about this diagram is that I seem to be honing in on something smaller scale. Up to this point, my past “business” could be characterized as a collection of odd jobs that happened to fall into my lap. Most went well, some did not. I’m thinking that now it’s time to apply the lessons I’ve learned in the construction of a compact, man-portable design business that converts “what I like” into sustainable benefit for me and the people I’m working with. But I don’t want to pursue a typical service model with the eventual goal of becoming a large agency. The feeling I want to create is more like that of having a a fantastic lawnmower, one with a tidy engine layout, great ergonomics, and an eagerness to cut grass extremely well, in ways I never imagined possible. In other words, I think I’m gravitating toward a limited application of my skills to create a design business that suits me. I’m not trying to be a “full-service agency” that does it all; rather, I’d like to make very simple focused applications in my little shop. That’s the niche.

Still, this is not the plan. This is another visualization, and I am finding myself spinning my wheels regarding the DETAILED BUSINESS PLAN. Any business plan worth its salt covers just a few basics:

And this is where I’ve been stuck, at the money-making proposition. Just what AM I selling? What is it WORTH? And WHO is going to BUY it?

I am making this much harder for myself because I’m trying to identify just what kind of design I do, and what kind of work I want to do. By extension, I am trying to define WHO I AM so I can create a design business that fits me; this is much more likely to be a suitable (and therefore sustainable) niche design busines where I can be competitive. To borrow an idea from the recent Marty Neumeier DVD The Innovation Workshop, I want to make a statement like, “David Seah is the only designer that does XXXXXXX”. Because that’s who I am, and I don’t feel good about doing it any other way. There is, surprisingly, a market for that. Whether it is large or small, whether there are compromises I have to make, whether I can make a living doing whatever it is I think I want to do is, frustratingly, a completely open question.

And there’s where I left off three days ago, as I pondered my “only designer that does XXXXXXX” statement. Originally, I was planning to plod ahead and write a series of articles about each of the Five Destinations, this being the one about “The Niche Design Business”, but since then I’ve had several realizations:

p>Now, I find myself in the position of choosing what I need to do to ensure that I am making money and making progress toward some kind of satisfying life goal. I have been assuming that I need to make the optimal choice, and my past activity for the past few weeks has been almost entirely oriented toward choosing the best elements of my past life experience to recombine into a new vehicle for my next leap. I don’t want to waste my time, so I’ve tried to be methodical and smart about it, but maybe I’m being too smart about it. That is, I’m designing a plan that on paper is very rational and personally insightful, but it’s a plan that I am not going to naturally follow. I need that room to move, perhaps, so I can practice the kind of furious creativity that I sense is achievable. And THAT kind of plan is more situational and reactionary, requiring that I trust my training to steer me away from fiery deathtraps. My experience with blogging has also taught me that almost everything I’ve done has merely opened more doors to opportunity. I don’t need an optimal plan after all. I need to just keep going.

Breaking this down simply, the action plan becomes merely this:

And perhaps I’m the only designer that blogs his plans like this. One of a very few, anyway. I don’t know why I do it, but I like sharing what I know with people who are engaged by the material. What would happen if I shared the entire design business process? That would be highly intriguing because it fulfills a number of past wishes I’ve had:

I am, essentially, starting over with the design business. If I were to take that very literally, it means I’d be starting from scratch, like I was in my 20s. And I think it might be very refreshing to actually adopt that mindset of being an utter noob again, except this time I actually have my current body of experience to guide me. Starting over isn’t so bad when you’ve got a guide that tells you it’s OK to not know everything, but you’ve got to master a number of specific abilities before you are allowed to leave the temple.