Vectorizing Photos for Productivity and Fun

SUMMARY: The point of being more productive is making stuff, right? I recently was able to overcome my procrastination tendencies on a long back-burnered scooter club card project, and produced something that feels real. Result: I’m feeling productive! Second result: by writing about it, I can see some of the patterns that helped get me through the project.

My buddy Sid started a local scooter club a while ago, and we really haven’t done very much with it. However, that doesn’t stop me from telling people about it when I come across another scooter rider. Problem: we don’t have cards to hand out. I finally got off my butt and made an illustration for the front of the card, motivated in part by the insights I had in the Brutal Simplicity post.

It ended up being a rather fun little project, so for a change of pace I’m going to share the creative process, interspersed with productivity insights.

Sid had already produced some card concepts, but had used Adobe Photoshop to create them. Photoshop is just fine, of course, but I like to work with vector graphics as much as possible, which provide practically infinite resolution if you do them right. This is important when making a big poster or a tiny business card, and it’s easy to rotate and layer vectors on top of each other to get interesting effects. So, I was determined to make some vector graphics clipart for use of our card by hand tracing a photograph. This can be pretty tedious work, precisely the kind of thing I’d procrastinate doing. However, I’d had the “scooter cards” on top of one of my index card piles for a week, and it just seemed like time to do it.

The first step: open the Illustrator program, import the photograph, and be ready. This meant I had to turn off my brain (ordinarily intrigued by surfing the net and pondering exciting things going on away from my desk) and really stare at what I had. I started assessing it and letting my brain (now unoccupied) start to assess what was there for the first and easiest and highest payoff stroke I could make. 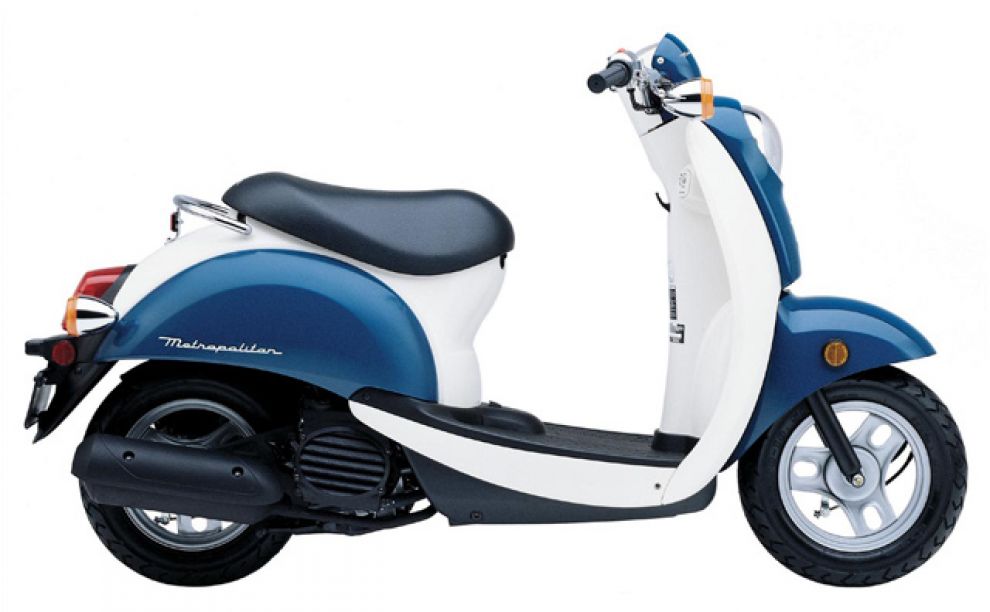 Sid happens to ride a Honda Metropolitan, so I started by tracing the photograph above. Illustrator has some automatic tracing tools, but I never use them because the resulting trace requires considerable cleanup. Plus, I learned to create vector artwork by imagining stacks of cut paper lying on top of each other, and like creating my own clean curves. The immediate challenge: find the biggest pieces of color that convey the shape of the image. 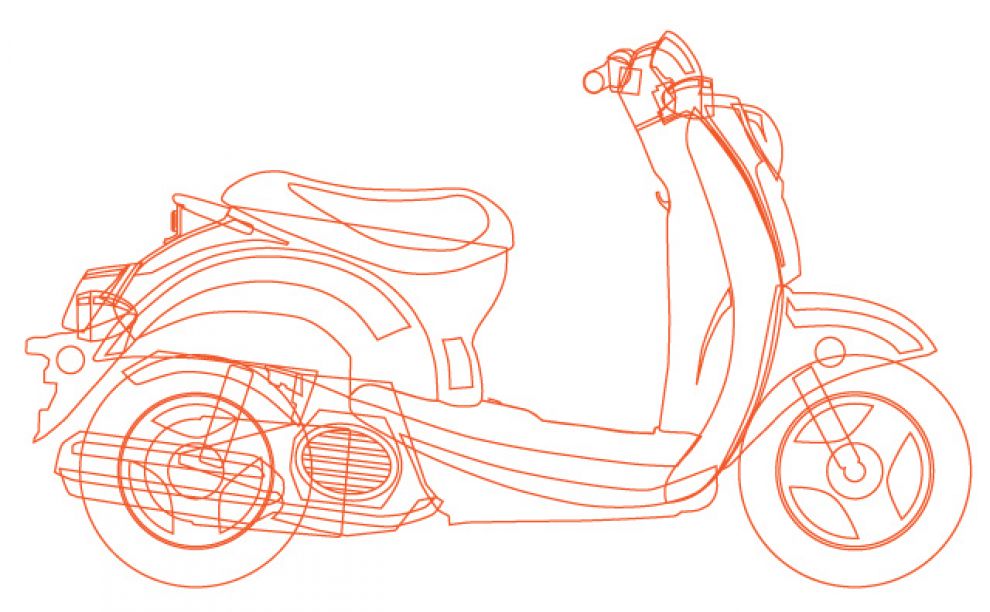 Scooters have luscious curves, and making those curves “flow” is important to capture the spirit of the illustration. I was also shooting for a cartoony-looking scooter (this is for fun, after all). So, defining areas of flat color was my primary goal, not photorealism. There would have been a lot more blended curves and fancy gradient meshes otherwise. 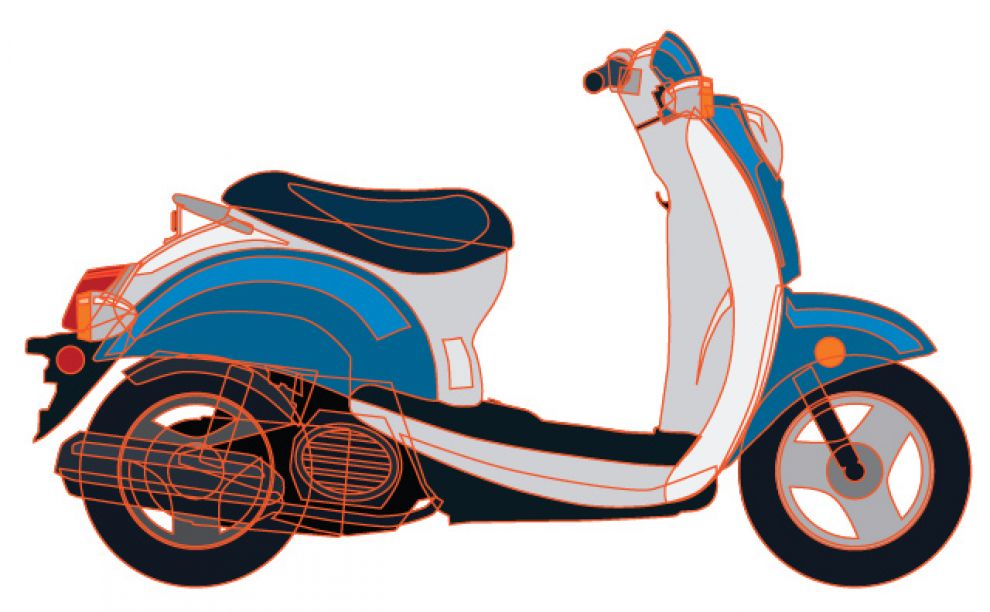 Here you can see the flat colors applied. The colors and highlights were eyeballed by myself based on the original source photo and what I thought would look good. Choosing good contrast between the tones took some back and forth. 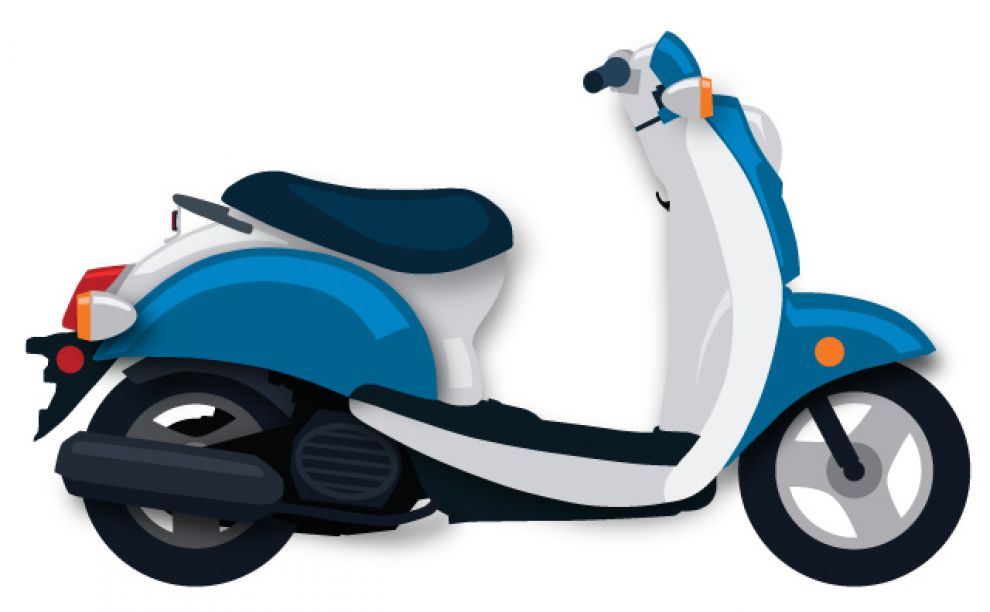 Next I did some quick “layered paper” shading. This isn’t realistic, but it adds some depth cues that add a bit of dimensionality without having to carefully paint in shadows and reflections, which I’m not good at.

And here’s the final 3.5 by 2 image, which is designed to fit on the front of a business card: 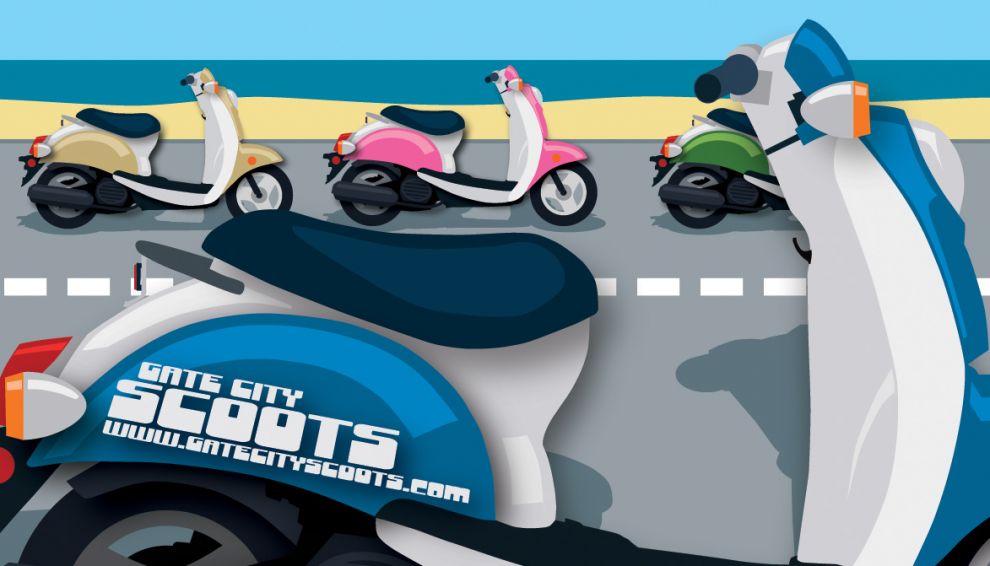 Since the source Illustrator file is all vector drawings with real-time shadow effects applied, it can also be scaled to any size and the curves will remain sharp. If I’d created this artwork at the business card size in Photoshop and tried scaling it up bigger, I would have been screwed, and would have had to redo the whole thing from scratch. Alternatively, I could have worked at a very high resolution in Photoshop, suitable for a large poster, but then I would have had too much data to comfortably work with and it’s a pain in the butt for several reasons.

The productivity payoff: creating a vector graphic was a two-for-one, which helps overcome the procrastination bug. Just to feel really good about it, I also then created an official master file for the graphic assets: 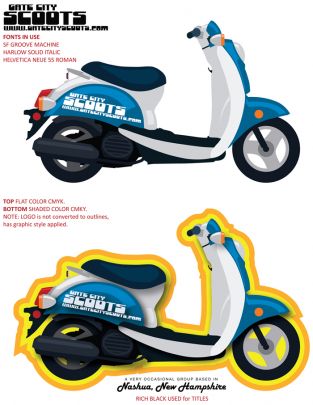 This “packages” the graphics so I can reuse them again in other contexts. Because I know my memory will fail me, I included reminders about what fonts I needed and additional processing might be necessary. The big payoff: I’ve just created an asset. This makes me feel productive. After all, it’s easier to feel productive when you have something to show for it. Remember that!

I’m always pleased when I can make something that is persistent in the world. The graphic I created, while kind of on the simple side as far as illustration goes, can be used to evoke an emotional response AND be reused. That makes me feel great. Getting here, though, took some time.

Defining the Project: In this case, I wanted the superiority of vector graphic sources before I started making the card. This was the right way in my mind (perfectionism in process). However, I also needed to do the photo tracing task itself, which I don’t find pleasant with Illustrator’s gimpy pen tool and was guaranteed to take a few hours of eyeball-searing work. I didn’t start for weeks.

Taking the First Step: After sitting on this for a while, I arranged to go to Sid’s studio and sit next to him during a work session. In essence, I used his presence and interest in the cardsto give me the motivation to start. First, I set up the photograph in a new Illustrator document, and traced the easy big shapes. This took an hour or two to get the main shell and fender before I ran out of battery juice and had to go home. Then I back-burnered the project for several more weeks. This wasn’t intentional, but that’s the way it happened.

Taking the Second Step: When I opened the file again a few nights ago, it was good to see I had the rolling start to get me going from where I left off. Each curve I filled in completed the overall shape of the scooter, and I started to get excited about seeing the whole thing complete. This anticipation plays against the sheer tedium of getting everything I needed in place. Once you have the elements in place, though, it’s fun and easy. I don’t know if this is a common experience for other procrastinator-perfectionists, but it suggests that reducing the difficulty in capturing the elements we need to create perfection, we might lower the activation barrier.

Getting into the Zone: After all the shapes were in place, I could to refine the proportions and curves, while playing games with colors and shading. This is where I start to lose track of time…it probably took 4-6 hours total, plus the 2 hours from the studio session, to get to the point where I had the basic graphic set.

Finishing: When it was done, I looked at it and refined it until I could refine no more. I couldn’t leave it alone, and spent another 8 hours adjusting shades, making mockups of the scooter club card, and fixing little “bugs” in the illustration. Because of the way I have the files set up, it’s relatively easy to re-generate the images and re-export them. At a certain point I just go too tired to continue, so I called it a night at 6AM. Maybe this is just the way I create.

Showing People: The next day I made these process documents. You can see the complete set on Flickr with detailed design descriptions. I’ve posted notes on Facebook, Flickr, and now the blog. I even dusted off Flash CS3 and made a quick dissolving MPEG video, which I uploaded to Flickr Video (a first). I’ve essentially reused the same content 3 times, which gives me a happy little productivity burst each time. And by making it available to people I’m ensuring that it actually feels like I finished something. That is a big payoff. It’s kind of scary to put the work out there, but accepting that not everyone is going to like it is part of the training: you finished something, and had the guts to show it.

This is pretty much how many of my more intense projects go. Actually, I can’t think of a project that doesn’t go this way; just about all the memorable ones are intense periods of working after the initial spark somehow gets me moving. Lowering that threshold through basic trickery like agreeing to start with other people helped in this case, and the project was short enough that I could get the satisfaction of showing Sid something immediately. The other trick was to just empty my mind before starting, quelling thoughts that it was too late to start. I shall have to try this again tomorrow.