One of the great sins of my personal branding effort has been to let a temporary photograph stand in as my website identity for so long. If you’re reading this article through RSS you missed the new header image that has replaced the old collection of scotch bottles. I just didn’t see the bottles anymore because I’m too close to the website, but every once in a while someone comments that they just assumed that my website is about drinking. I’ve resisted changing it until now, because I liked the photo, but I’m finally starting to define my design methodology and the image is incongruous with respect to a respectable practice. It’s time to put my childish preferences aside.

The visual history of my website header is documented in my post Inadvertent Branding, but the short version of the story is that the bottles (see below) were a joking commentary on my cavalier attitude about moving my website between servers, live, without doing a whole lot of testing. At the time I was also rather fond of the colors in the image, taken with my previous-previous digital camera (a Canon PowerShot G2). Looking at the image now, I can see the nasty contrast issues. Check it out, preserved below for posterity:

The picture in the new header was taken at Starbucks with the 40D to illustrate a blog post, and was serving as (wait for it) a placeholder in my new website design. The new design, sadly, has not been going anywhere since January, so I decided to just grab the image from it. At least the new photo is somewhat informational in its subject matter. Plus, it has my two favorite pens in it (a Lamy Safari and Al-Star) laying on my favorite notebook (a Cachet Classic Graph). The eventual plan is to shoot a new header image depicting a ton of my favorite bits of gear used in support of my identity and design agency philosophy. But first, I’ve got to write it. So for now, this header will serve as a transitional brand image. That probably is some kind of no-no, but as I am also in a transition period, I am allowing for poetic license. So there. So much for growing out of my childish preferences.

Another transitional element I’ve deliberated added is the shift in colors toward the orange-blue palette that my latest business card is using: 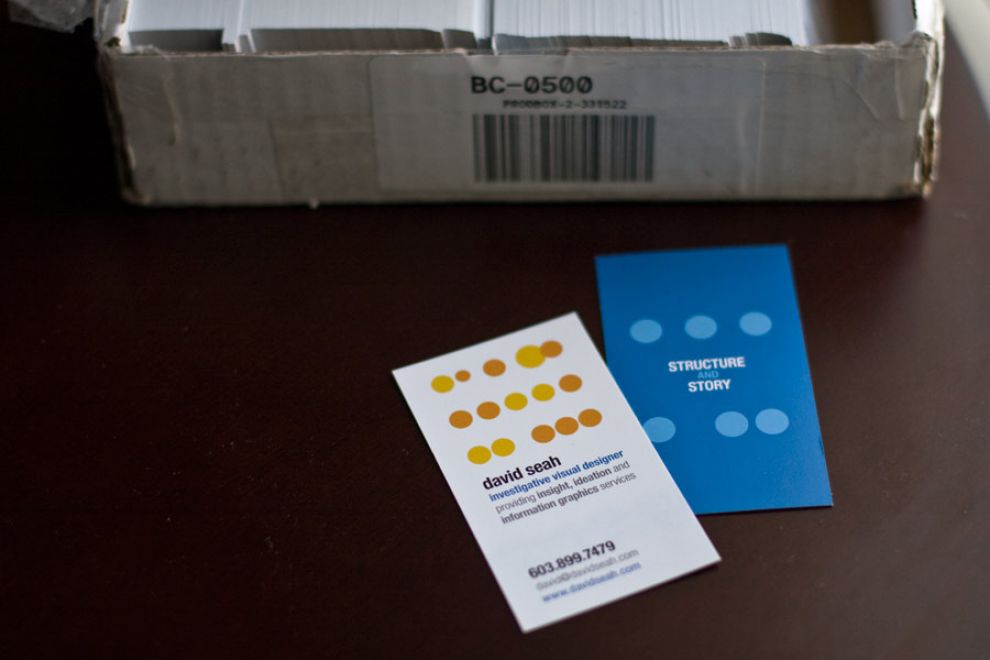 The evolution of my business cards has never really matched the evolution of the website, but there’s no more excuses now that I’m settling in a “design niche” I think is suited to my peculiar skillset and personality. To help, I’m using some language from the cards (“investigative designer”) while retaining some of the keywords that the site has become known for (“productivity”). I also am using the gestalt dot story as a bullet for the design portfolio” button, which is now a little more obvious than before. I’m not sure if I like the bullet, but at least we’re starting to get some repetition of elements between the business card and the website, which helps make it seem more like a “brand”. It’s not great consistency, but then again my so-called brand identity has always been somewhat “ambient” as opposed to “direct”. Certain elements like proportions in my design work, color choice, typography, and use of photography have been fairly consistent over the past few years. The explicit use of my name has also been consistent; I demoted the original name of the blog, Better Living through New Media, to a subheader quite some time ago. This probably was a lucky decision, as I’ve discovered that I really do prefer to engage with people one-on-one, representing me-as-me.