My sister and I have been in Taiwan for about a week, mostly staying at Dad’s place in Taichung City. Although we both spent about a decade here in the 70s-80s, we lived in the capital city of Taipei, so we’re not familiar at all with Taichung. Neither of us speak passable Taiwanese or Mandarin either, so we’re almost completely dependent on Dad and our relatives for getting around. It’s been interesting to reconnect with Dad and seeing how he’s living his life. This really is his home, and it’s good to see that he’s got plenty of things to do to keep his mind engaged. He just celebrated his 80th birthday, and he’s running around like he’s still in his 50s. I hope I’m as spry as him when I’m his age. 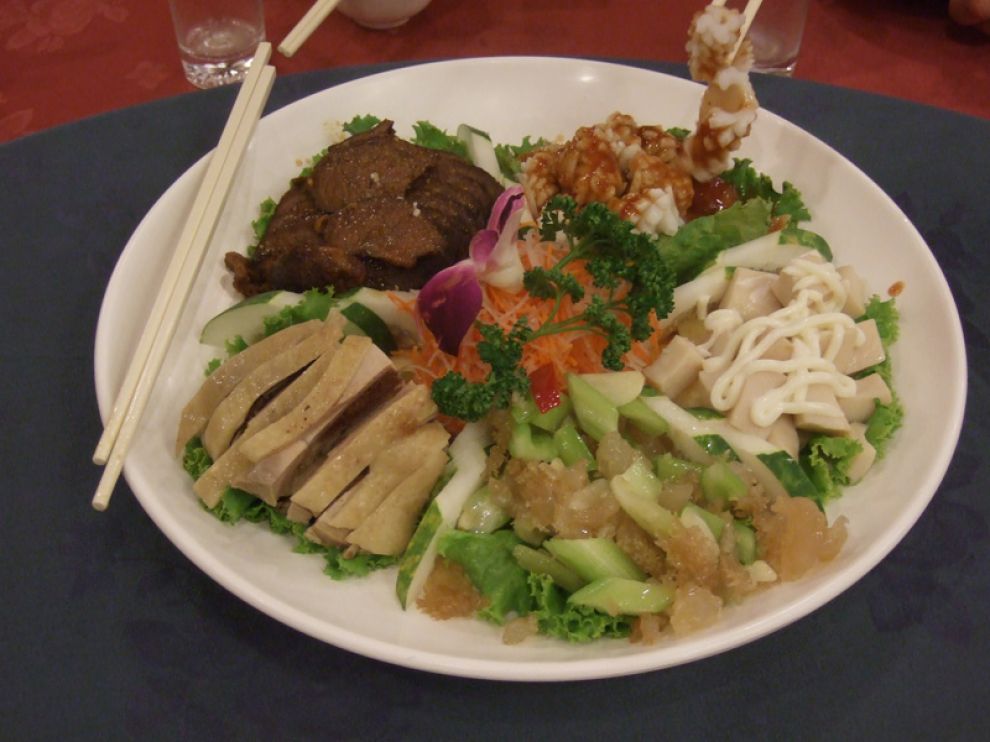 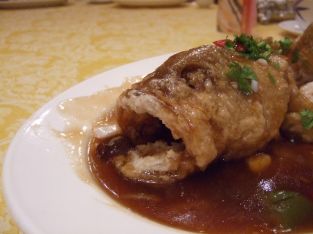 So far, we’ve participated in several Taiwan-style banquets, which consist of multiple courses of local delicacies at special restaurants. Taiwan, being an island, is pretty heavy on the seafood. I don’t mind fish, but shellfish makes me ill, which puts me at a disadvantage at these banquets. Still, I’ve eaten a few new things that I never would have tried with I was 12: deep-fried frog (tasted like a fishy chicken), jellied pig blood, some kind of squid ball that my sister tricked me into eating by saying it was fish, a slice of fish caviar cake, some sea cucumber soup, pig foot and a fruit called durian. 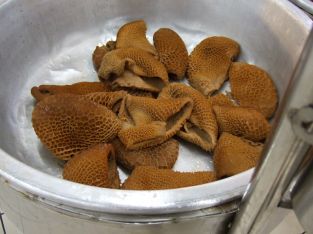 We also saw quite a few interesting things for sale at the local supermarket, like packs of chicken butts (considered a delicacy) and stewed pig tongue and stomachs. I haven’t seen one thing that has resembled anything we’d have back in the U.S. at a “regular” Chinese restaurant. That’s probably because we’ve been eating Taiwanese food because this is the preference of Dad and his adopted Taiwanese son (this is a long story, but it’s not uncommon for good friends to give their “extra” sons to others, thus tightening the family bonds). The shock of all these weird foods was wiped out of us when were were little kids, though, so it’s mostly been fun for taking pictures to gross people out back home.

I’ve been trying to figure out the essence of being Taiwanese through observation. Our families are proud of being Taiwanese, though I’ve never really felt a part of it. For one thing, I never learned how to speak Taiwanese even though I lived here for 10 years. We tried to learn Mandarin, which is a more universally understood language, but as a result we didn’t learn either language well. On this trip I’m starting to think that I might be able to finally pick it up; I just need some structured language learning and drills, as there are some innate conversational patterns burned into my brain. Some of it is starting to come back, especially as I’ve been listening. There are apparently a lot of Taiwanese kids in the younger generations who don’t speak Taiwanese either, so perhaps I am in good company. It’s interesting that in terms of appearance we completely blend in. I’m used to sticking out a bit more in mostly-white New Hampshire, though I often go for months at a time forgetting I’m Asian. Everytime I open my mouth to talk, though, people think I’m from Hong Kong because my Chinese really sucks, but for the first time this isn’t really bothering me. I used to be really sensitive about sounding like an idiot when I was a kid. I guess now that I’m larger, people are a little more polite about it. Or maybe my attitude is better. 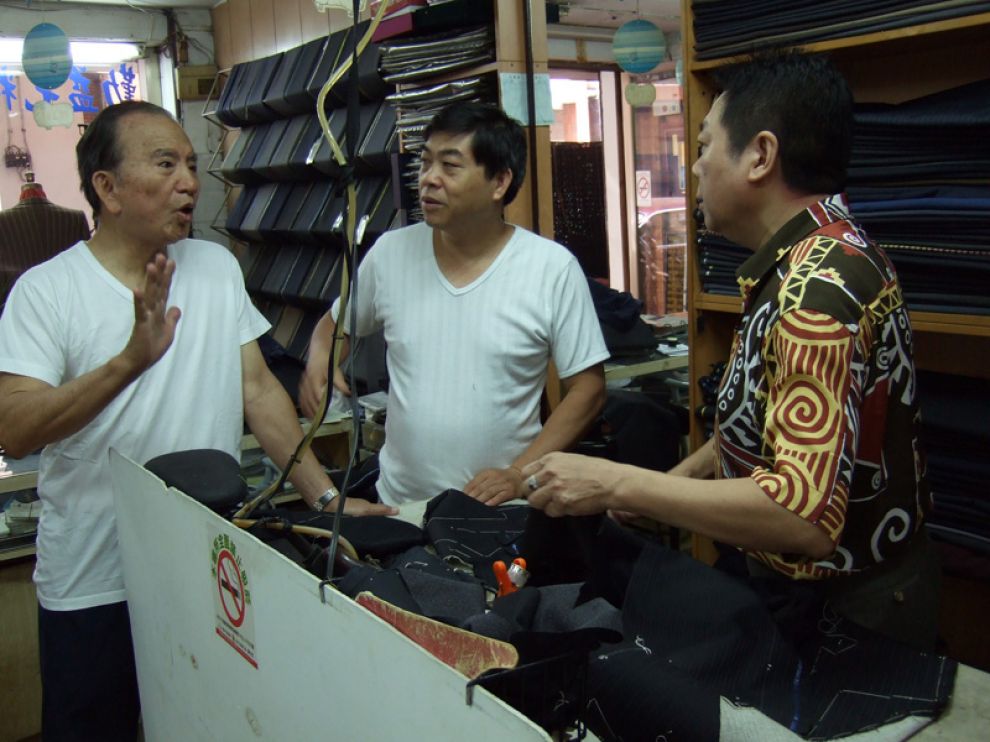 Wednesday morning we went clothes shopping for my sister. This wasn’t really my sister’s idea, but it had been suggested that we do this because I had been taken to a local tailor to have some custom suits and shirts made. It’s much cheaper to get such things done in Taiwan than in the United States, maybe one third of the price. Both Dad and A-bun (his adopted son) have a strong personal interest in the purveying and acquisition of the suit and shirts, acting as interpreters and bargainers. It’s actually kind of expensive, way more than I’d spend for clothes in even two years, but I’m operating on the theory that it’s far worse to NOT accept their kindness. The giving and accepting of gifts is quite important in the family; I’m already thinking of what I should acquire for them in the United States, though I have little idea what they would appreciate. If I were to guess, it would be any item that could be described in simple superlative terms: “beautiful”, “wonderful”, and sometimes “expensive” and “famous”. I’ve noticed among my relatives, the qualification of the excellence of any particular item depends on who else has used it or whether it’s a brand name of some kind. This may be a reflection on the importance of “face” in Asian cultures; reputation is very important and it’s automatically passed from person to person in a kind of chain of recommendation from Pierre Cardin himself.

As the part of Taichung we’re in is somewhat provincial, I’m wondering what the suits will LOOK like. A-bun was concerned that Emily would feel left out because she didn’t get any clothes, and constantly suggested that we go look for dresses. He even called ahead and set up appointments before hearing, through Dad, that this was perhaps not a good idea. Dad later joked that the Taiwanese have genuinely good hearts, but it sometimes can come across as being more about what they think is good for you rather than you might think. So far, the suit looks OK (I got to do a rough fitting, which was cool to experience). Emily said it didn’t look weird. 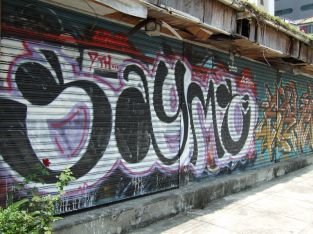 After getting back from the dress shopping, Dad and A-bun dropped us off with the key to the apartment so they could go run some additional errands. Instead of going immediately inside, however, we decided to walk around the block and see what was there. As I’d mentioned earlier, I’d never seen graffiti in Taiwan before. We also noticed later that despite the congestion in the street, there was very little honking of car horns. And, surprisingly, the streets are quite clean. Dad was home by the time we got back, and gave us our own key so we could go out. It hadn’t occurred to him, I think, that we’d want to go exploring ourselves. It hadn’t really occurred to us either, but it was an important step in just getting more comfortable in our environment and feeling less like we are 12 years old.

Tomorrow we were originally planning to go visit Taipei City, but we may just stay local and rest. There is a cultural center nearby we may check out; I’m looking forward to seeing what kind of design community they have.