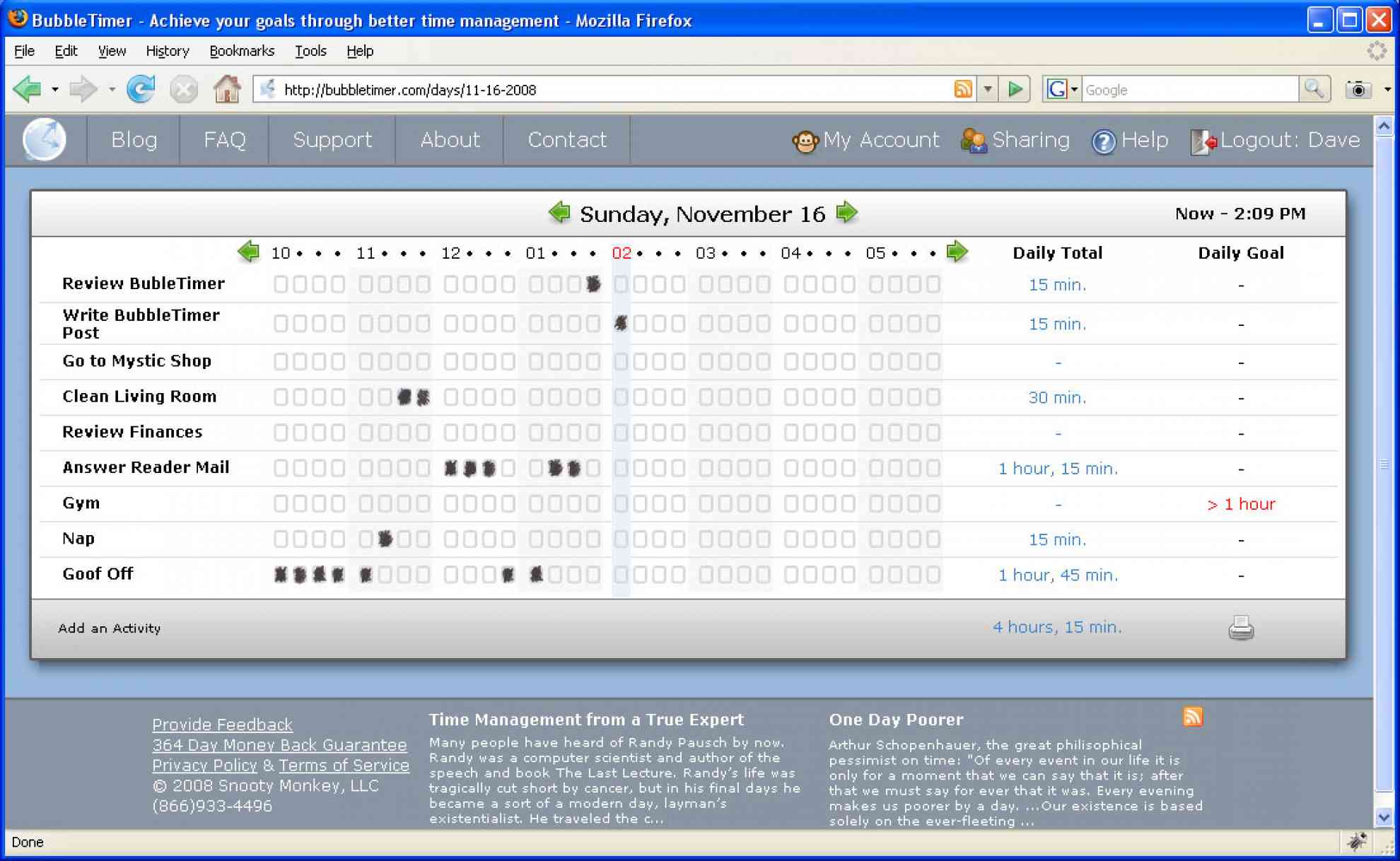 A few months ago Sean Johnson contacted me for permission to create an online version of the Emergent Task Timer (ETT), a form I had designed a few years ago to maintain focus in the face of unscheduled task chaos. Anecdotally I’ve heard that it’s popular with graduate students and people who get pulled into a lot of meetings; a filled-out ETT provides documented proof that there’s just too much crap getting in the way of getting real work done, in a compelling visual manner. While I had created a prototype of an online version of the ETT, I didn’t have the back-end database expertise to create a full-featured web application. Others have asked for permission in the past, and I’ve generally granted it (ideas are free, after all), though few have actually followed through. Geoffrey Grosenbach was the first out of the gate a few years ago with his Online CEO, an implementation of my Concrete Goals Tracker, and now Sean Johnson presents his BubbleTimer application to fill another gap.

I checked out the BubbleTimer for a few minutes today, and am generally impressed. Initially I wasn’t sure I’d use something like this myself, suffering a bit from envy at someone actually having made a working version of my own tool, but as I clicked through it I again became excited by the possibilities, particularly with the task sharing feature. And it’s nice to know that the data is saved and backed up on a server somewhere. Pretty cool! And unlike my prototype, Sean’s version has the long-requested task reordering feature. Sweet! What’s missing are some of the future planning features so you can block out how you THINK you’ll use your time (something that didn’t work well on paper, and was not implemented in my prototype). The basic idea is to mark future time as slightly-highlighted ovals, which are malleable right up to the time when the time-counter “fixes” them forever. This allows you to establish the intention to do something at a certain time, mark off meeting times and errands, and so forth, without being committed to them. Consider this a feature request :-)

I’m not involved in Sean’s enterprise, and I have no financial stake or partnership interest, but I think it’s awesome that he’s made something that he really wanted to use himself. I asked him for some background information via email after he told he he’d gotten the application ready for release:

I’ve always had a lot of goals and I’ve been quite frustrated that poor time management was holding me back from achieving many of them. I’ve never been lazy, quite the opposite, I was working long hours, I was using GTD, but I was not really working smart. I just wasn’t spending enough time on the things that I said were truly important to me. My time usage didn’t match my goals and I didn’t even have a good sense where all my time was being spent. I found a great tool in David’s Emergent Task Timer printed worksheets that made a huge difference in my life in just a few weeks time. With emergent task timing I was able to quickly get a sense of where my time was being spent and I was able to start adjusting that to better match my goals. I knew right then that I wanted to take the method online and make it available to everyone. I found David’s prototype flash application and knew that the technique could work as well online as it does on paper. I contacted David and then I went for it. I created BubbleTimer using Ruby on Rails it was a key technology that made it possible. I never could have done this much development in my nights and weekends time without a productive platform like Ruby on Rails. This is my fourth Rails application now, but I come from the Java world, and this application would be twice as big, twice as complicated and would have taken twice as long if it was done in Java. I’m excited about the prospect of BubbleTimer helping people achieve more. I’ve been using it myself for months now and it’s be a great tool for a goal oriented approach to time management. It’s as easy to use as the paper version but without the dead trees. It also has some important improvements in terms of instant feedback on cumulative totals and graphs showing how your time is being spent that can’t be done with only paper. More than anything, I’m excited to get people trying it out and giving me feedback so l can make it even better.

Check it out Sean’s Ruby on Rails implementation of the ETT at BubbleTimer.com. I think it’s pretty cool; just don’t blame me for anything and complain directly to Sean by his request ;-) Congrats Sean on launching the app, and THANK YOU!