I wasn’t even going to write this, because I went to bed at 9PM so I could be at the polls by 6AM. By my official schedule, I should be sound asleep to establish an inspiring personal track record of productive discipline. What I didn’t count on was a sudden blast of insight that jolted me wide awake about two hours ago. After I heard my Timex beep the hour twice, I gave up and decided to do some writing. The day started strong and ended haphazardly. However, failure has led to a series of epiphanies regarding productivity and mirthfulness. 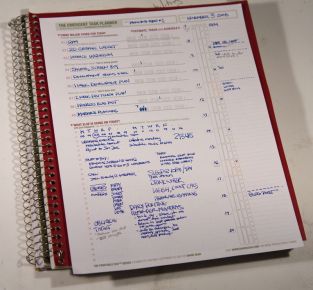 The first day of any habit usually goes pretty well, because I’m motivated and ready to go. And indeed, my morning started out great. I woke up at 530AM, dressed in real clothes, and got over to Starbucks by 6:40AM to start planning on an Emergent Task Planner sheet (see photo). This being the first ETP sheet in some time, it’s fairly choked with things to do. I had no illusion about getting them all done, however, so I just kept adding to it to rollover to tomorrow’s sheet. By 700AM, I pretty confident about what I needed to do overall for the day, and wrote down first steps for the day’s programming tasks in a separate notebook. By 715AM, I was ready to head to the gym for an hour, planning to follow-up with a quick trip to pick up a room divider screen plus adequate protein for the day.

I also decided on a day’s personal challenge of sharing positive energy with strangers on the street. I found that I was unable to really muster the ability to power through other people’s default mood, which was that of casual preoccupation and indifference. I had never noticed this before, probably because I’m in the same place. The best I could do was mirror people’s mood in a reactive way. When people smiled, I could smile back. If they didn’t smile, I just moved my gaze onward. This was a disturbing realization, as this indicated a lack of positive energy on my part. And that’s a problem; if you want to be around positive people, you had better be positive yourself. Like attracts like, ya know.

Getting back to the gym in the morning was nice. It had been quite some time (3 months) since I’d done an early-morning gym routine, and it felt good to just work through the muscle groups and sweat. I didn’t push myself too hard, as I wanted to be “clear headed” without the tiredness. Mission accomplished, I zooped back home to read my email. Several readers provided some very helpful comments regarding the productivity reboot, offering empathetic advice. “Clyde” noted that although cleaning up my space was one way to improve motivation, the real change has to happen in the mind. He suggested a particularly vivid mental trick, imagining that one is sucked into the task to create joy and openness. This would prove to be an important observation for later in the day…thanks Clyde! As much as I like to think myself the master of mind trickery, it’s good to be reminded that others have their own master collection of insights.

The day started to go awry when I made some poor choices about the use of my time. First, I decided to go buy the room divider screen I’d seen at a store last week. It was no where to be seen, so I went to another store, then another, then another. I spent the next couple hours going to six stores where I thought I’d seen screens like this, only to find that they seem to have been completely erased from the face of the Earth. I knew the entire time that I was being obsessive about it, and decided to end my trip by at least buying some low sodium soy sauce from Trader Joe’s (my favorite for taste and cooking) to salvage the rest of the day. It being close to lunch time, I made my second mistake: I went to KFC and got a chicken breast meal with potato wedges. The combination of KFC plus the tiredness that had accumulated over the extended shopping after working out at the gym completely knocked me out. I would have slept longer if it wasn’t for the incessant calling and doorbell ringing from Obama supporters throughout the day.

It being 2PM, the day wasn’t completely screwed, but I knew that by 5PM I would not be able to maintain any work momentum. That is when I made several more erroneous judgment calls. Three good friends of mine happened to contact me one after the other, and I chose to spend time visiting with them rather than telling them that I wanted to work. The first friend, A, is going through a similar bout of motivational reconfiguring, so I rationalized that this might pay off in the long run. We talked for two hours, outlining possible issues and strategies regarding motivation, all the while acknowledging the irony that we were also procrastinating. At 5PM, I went to meet my best friend E at Starbucks to restock on general cheerfulness, which is important to have stocked in New England during the cold months. Finally, at 615PM I met friend number three at Lowe’s to pick up some stuff, and offered to help him unload a new snowblower at home because it was a two-man job. And then, the day was gone. Poof!

Reflecting upon this massive failure to stick to the plan, I recognized two mechanisms in action:

p>Despite the drawbacks of the day, they did lead me to an important personal observation:

Ok, I already knew this, but instead of depressing me, this made me laugh at myself. My propensity toward silliness was evident while talking to my motivationally-challenged perfectionist friend. I worked myself up to a comedic fervor, vividly guessing an over-the-top version of his probably dreams. My friend pointed out that this was a kind of vision, and this struck me. The truth is this: I like being silly, and I like making up stuff that is improbable but awesome. This is one of my passions.

For someone who likes silly things, I have nevertheless tended to chose to be serious about life. I’ve known that I needed to lighten up about life for a long time, and recently I’ve felt I need to project positive energy to have any hope of being productively happy in a self-sustaining manner.

In retrospect, the approach I took to address my squareness was to address these three areas of discomfort:

These are all good mental stances to have, but here’s the drawback: they are all reactionary methodologies! After all:

These are coping mechanisms. And because they are reactionary methods, I am reactionary. My experiment earlier in the day to spread positive energy fizzled because I didn’t have the energy to begin with; I only had the ability to reactively shape what is already was in the world. It would be far better to be able to create such energy from scratch.

Cultivating silliness and mirth may change the equation, because it unlocks my sense of joy, which I think is inherently creative. My particular brand of mirth recognizes that there are a lot of crazy, obsessive, unique, and off-kilter people in the world who are completely inspiring. Their uniqueness is a source of excitement and change, and I like to amplify and share it wherever I find it. I also believe the the world is inherently sorta improbable to being with, and we exist AT ALL is a cosmic wonder. In my search for greater meaning, I’ve forgotten this. Maybe finding my bliss is as easy as finding something to laugh with to see where that goes. Is there anything more positive and joyful to share than a good laugh? If I can cultivate my natural silliness as a source of demonstrable mirthfulness, that might give me what I need to make more changes in myself and the world around me.

Day 2 is usually harder, but armed with today’s insights I am hopeful of maintaining discipline. The challenge is likely to be more physical: I’m going to be tired. I need to make sure I don’t eat anything that makes me sleepy, which means avoiding sugar and carbohydrates. It is also Election Day here in the US, so it will be awfully tempting to spend the day watching the progress of the vote. We’ll see how it goes. I need more data to see where my patterns are breaking down.

As I wind down to sleep, I’m struck by the Christian phrase, “God is Love”. Perhaps God is Laughter too?