I get asked about once a month about the whiskey and scotch image banner that is featured at the top of this web page. Concerned Christians have asked me about it in email, making sure that I am not embarking on a doomed spiral of binge drinking. The best thing that I’ve gotten out of it was a very nice bottle of Scotch from a German fellow (thanks again, Alan!) who happened to be visiting New England. I got asked about it again today, by a friend who I hadn’t spoken to in quite a few years, so I think it’s time to tell the story. You can think of it as a cautionary tale about what happens when you don’t think about your brand before laying pixels out on the World Wide Web. On the other hand, I don’t think it could have happened any other way, and it’s certainly fun to look back at the evolution of my online identity.

I started with Movable Type in September 2004, but switched almost immediately to WordPress 1.1. However, I hated WordPress’ default typography, so I ported the Movable Type template over. I only added a simple graphical header:

In October or so, I was processing a particularly yummy-looking picture of some Chinese-style pork belly stew, and added this banner below the header for fun:

I decided I liked the combination of image and text, and even though it didn’t make any sense at all I decided to just keep it. I was still trying to figure out what the site would be about, so over the next few months I added a few more banners just to liven the place up. Eventually 13 banners were created, and they would be set depending on the day using a simple algorithm. Here’s what it looked like: 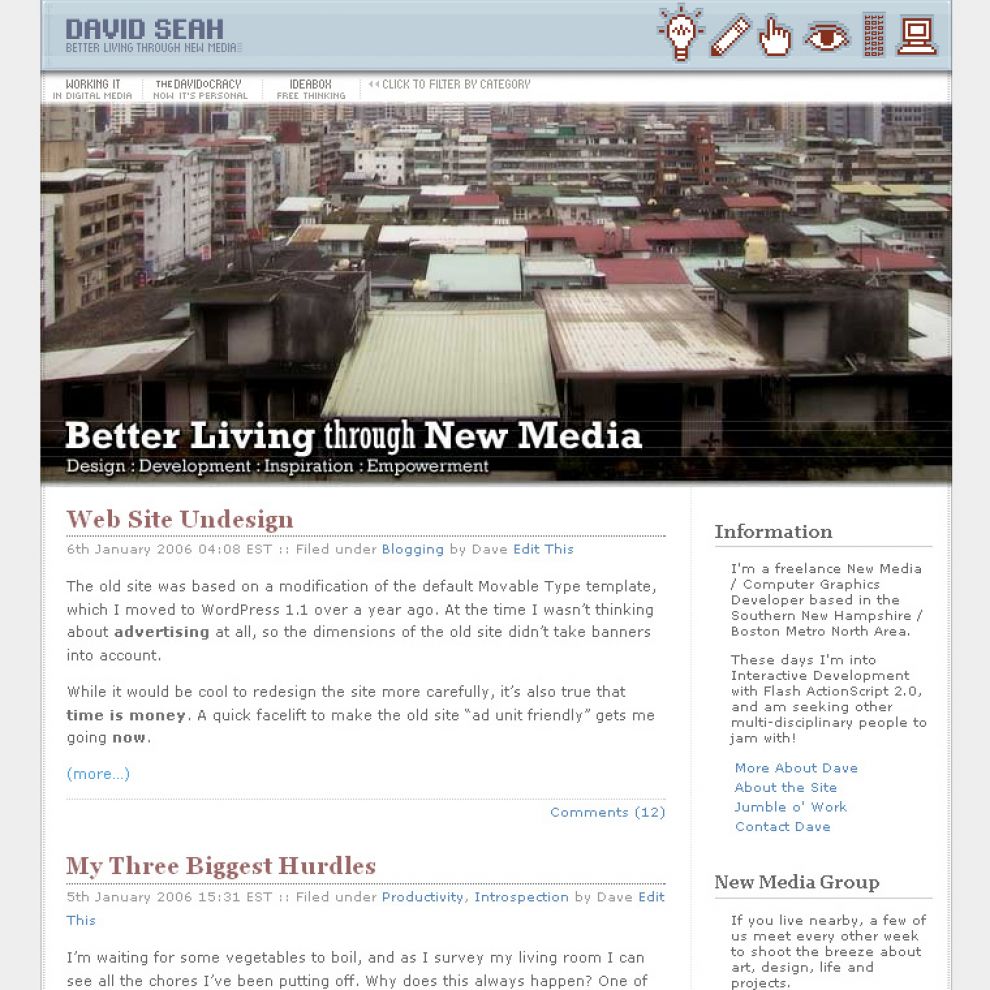 And here are the 12 other banners:

In January 2006, I was thinking about adding advertising to some pages of the website, but the old fixed-width design hadn’t taken this into account. I basically needed to widen the layout a bit. You read about the design decisions I was facing in 2 Days and 28 Pixels Later, the original post that documents the redesign. This is when the infamous whiskey picture first made its debut.

At the time, I thought that the picture would be temporary, and it was used on context to the way I was doing my site update. Feeling particularly lazy, I didn’t set up a proper staging server to test the new deployment on. Instead, I just backed up my databases, crossed my fingers, and did live updates on the running server. This is extremely bad practice in a production environment, but at the time I was getting only 250 pageviews a day, so I figured no one would notice anyway in the middle of the night. However, I knew it was still a bad idea so I decided to use this picture of the scotch bottles, which were left over from an attempt by my dear cousin Ben to introduce me to the finer things in life. I had mentioned to him that I didn’t know anything about hard liquor, and so we went to the New Hampshire State Liquor Store and bought a selection of “introductory” scotches and whiskeys. I tasted each one of them, and didn’t like any of them that much. I actually don’t drink at all, except for the occasional beer when I’m having a good pizza.

The bottles, however, photographed quite beautifully.

The composition was such that it would work well with a Post-It Note I photoshop’d into the picture that read: Danger! Live Update in Progress! XXXOOO – Dave. The joke here was that I was doing something irresponsible on server, which is on the same level as mixing alcohol with work:

I figured that I would put the “real” banner in place after I was sure that the design worked, by adapting the banners from the old site. As it turns out, though, none of the images were suitable for the new aspect ratio of the header; I’d inadvertently designed myself into a corner. I would have to reshoot all my banner pictures! I never did get around to it. And then a couple design ranking websites actually liked the design and booze theme, and then I just plain forgot about the whole thing. When I decided to move to Expression Engine, I deliberately did not attempt a redesign because I had a whole new templating system to learn and 1200 entries to convert. Now that I’m a little more comfortable with how EE works, I am thinking about a redesign again to fix the terrible navigation on the site…a lot of stuff is buried and inaccessible because the WordPress categories did not translate cleanly over. Sigh.

The Brand As it Stands

I keep saying “brand”, when I really mean “identity”. Right now, the look of the website is somewhat entrenched. I like the irreverent imagery, too. It’s a kind of visual non-sequitor because it has no bearing on anything I write about on the site. And that’s kind of fun. I could invent a thematic rationale after-the-fact like the quality, variety, and international origin of fine spirits reflect the best of life’s offerings for the discerning palate or some such nonsense, but you and I would know that I was deliberately spouting crap :-) However, there IS a grain of truth in that statement: I do aspire to experience more, and there is something rather nice about the variety of pleasures that I have yet to sample. And I must admit, I have developed a taste for certain peaty Scotches; the Lagavulin 16 year single malt is what I like, but I use ice and only drink 1/8th of a finger at a time. I am basically just smelling the stuff, letting the complex bouquet of aged wood mixed with the hint of smoke waft through my upper nasal passages. I am not sure that this counts as actual drinking.

So that’s the story! Moving forward, I may retain elements of the bottles, booze, interesting colors and maybe ill-advised combinations of objects as a visual theme, but I’m sure that a branding consultant would tell me I’m doing terrible things to my message. I might care more if I knew exactly what that message was; I’m still figuring it out…