A New Pen for a New Notebook 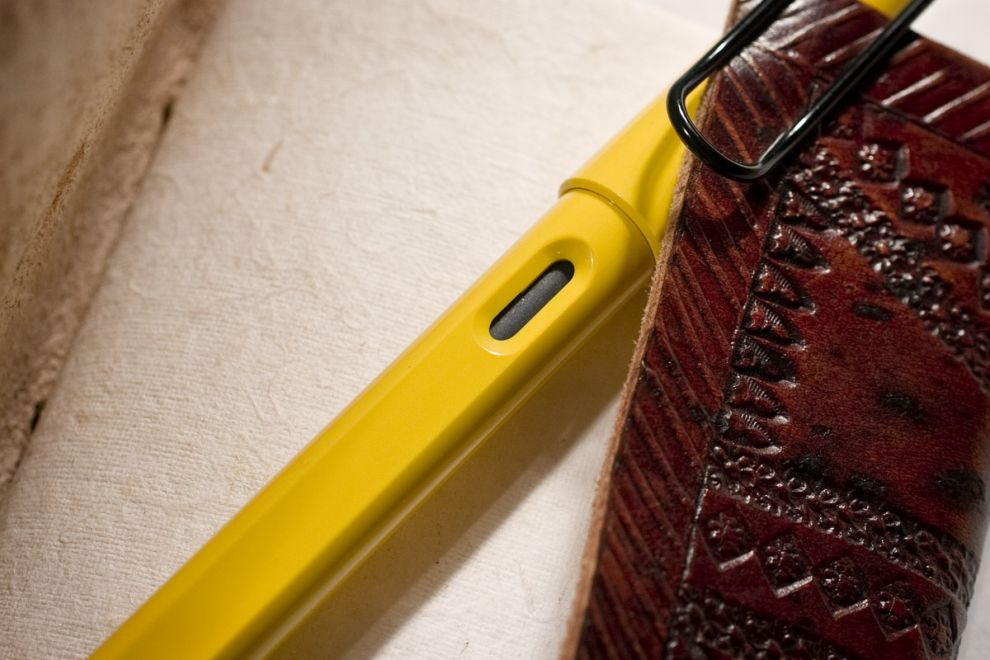 A good friend of mine recently went to London, and on return announced she’d gotten me a present that was not very “London”, but was likely very “Dave”. I was in San Jose at the time, however, and had to wait a week until I got to see it, which gave me plenty of time to think of what it might be. Gifts are an interesting window into friendship, as they give you an idea of how you are being perceived. In the worst case they are way off the mark, but in the best case they illuminate something that’s more fundamental and perhaps unexpected.

When I finally got to see what it was, I was somewhat surprised to see it was a leather notebook. I’m super picky about notebooks and stationery, so this was a bold move (though I doubt it was realized at the time of selection). I am a fan of sturdy tightly-bound journals and durable papers; my current favorite carry-around is the Moleskine Reporter format. The new notebook was pretty much the opposite of my Moleskine. It was just a sleeve of hand-tooled leather, decorated with repeating die stamps. A sheaf of fluffy textured paper was cut to fit into the sleeve, and held in place with a long string that was punched through the spine in three places, which also wrapped around the entire notebook to keep it tidy. After the initial surprise wore off, I was struck by the idea that this notebook binding might have been the way it was done long ago, and that this could be some kind of replica or artifact. I loved it. 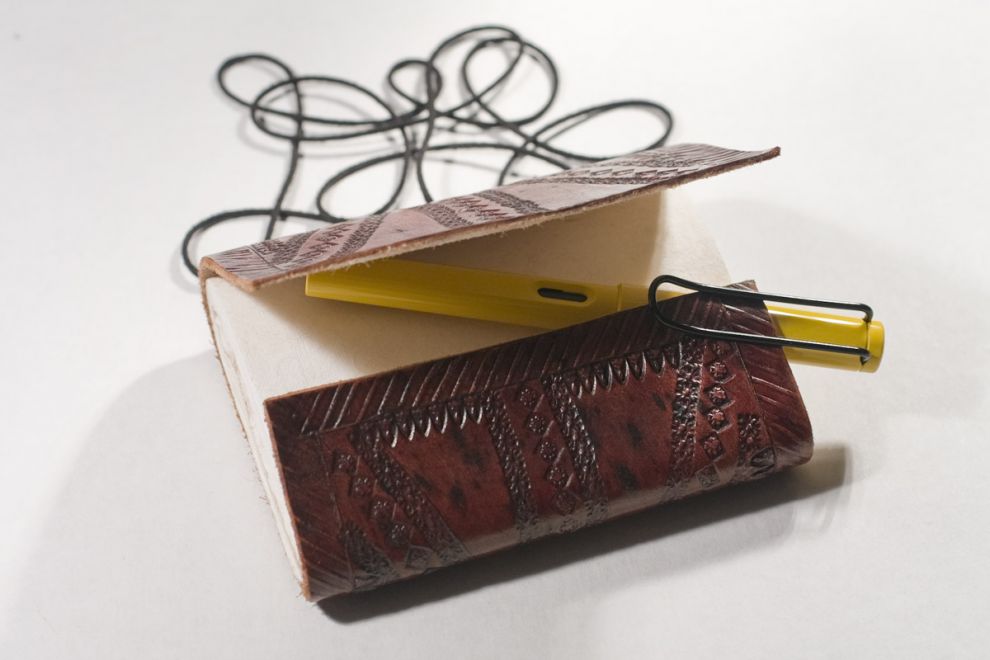 No, it was nothing of the sort; it was just something she saw that she thought I’d like, perhaps because I am constantly hauling out tiny notebooks and am writing in them at the coffee shop. I’ve been getting away from computers more and more these days when I’m thinking, as I find making marks by hand engages a different part of my brain. I feel more connected to the ideas, and the lack of “undo” makes me more mindful of what I put down. I use my Moleskines as daily working notebooks and have learned to treat them as “sacred scrap paper”, but this notebook was just the sort of thing I knew I would have great difficulty writing in. The kind of words I would write in such a notebook would have to carry their weight in artfulness or importance. I would hate to blemish such a notebook with anything less.

“You know, I don’t know what I would write in this,” I admitted as I examined it further. “It’s so nice.” “You’ll write ideas for stories in it!” my friend proclaimed vigorously. “Things you hear other people say, phrases like that one we keep wanting to use…uh, what was it…” “It was 30 degrees above warm?” “Yep, phrases like that! And other ones that you come up with.” And that was the end of the discussion.

It’s not very often that I get a present that so successfully combines so many personal quirks and goals into one package, so I was doubly-impressed. Of course I didn’t want to use any old crappy pen, so I started looking around for a nice fountain pen that I could carry with me along with the notebook. I found that Pilot makes a $1.89 disposable fountain pen that apparently writes fairly well and would be a good test. I tried my local Staples to see if they carried it (they do on the Website), but they only had a few mediocre-looking pens in stock for more money than I was willing to spend. A bit more Googling revealed the fascinating cult of fountain pens and moleskines that already exists. I took note of a few brands that were mentioned, and decided to just keep my eyes open for stationery stores. For some reason, we don’t seem to have them in New Hampshire, so it would have to wait until next time I headed south.

I was visiting my sister last weekend in Rhode Island for fun, and we stopped by one of her favorite stores, Figments, which is run by a RISD graduate / graphic designer named Peggy. It’s a small store that stocks an eclectic variety of stationery, furniture, one-of-a-kind gifts, and other tasteful artifacts. I’d been there once before, having gotten excited by some aluminum binder covers that I didn’t end up buying because I (again) didn’t know what I would put in them…they were so cool :-) This time, I saw that Peggy carried a handful of the German Lamy pens pens I’d read about online, though it took me a few moments to remember this. I got the Safari, which is regarded as an inexpensive and reliable fountain pen, in a color I am very fond of. My sister commented how she doesn’t ordinarily like fountain pens because they feel scratchy and catch on the paper, but the Lamy was very pleasurable and smooth. She called me up later to say that she wanted to go get one. :-) 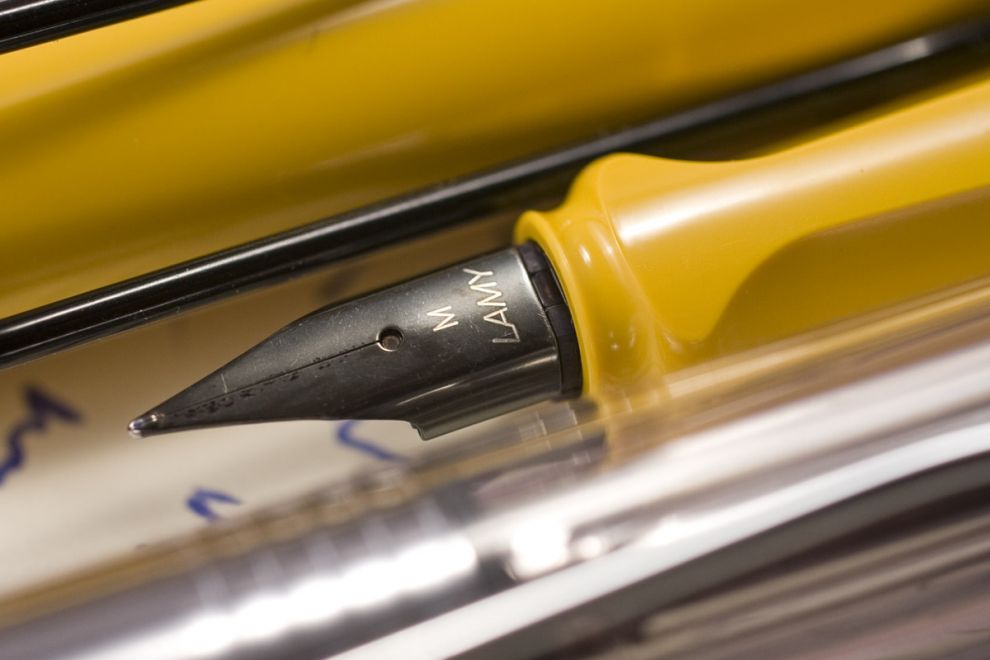 I actually haven’t tried writing in the notebook yet with this, because I haven’t yet heard or thought of any interesting phrases to put into it. I also want to get some brown ink, so it looks extra-ancient when I write in it, but in the meantime I’m willing to use the blue cartridge that came with it. I am a little concerned that the paper will be too porous for the fountain pen, but I will try it out later this week and see what happens. It may be that the other pen I got at Figments, a Lamy Vista Rollerball, will work. I wasn’t planning on getting this pen, but I was sharing a story with the owner about how there was a certain green Pilot rollerball pen in the 80s that I used to love writing with. My enthusiasm must have triggered something, because she hauled out this pen and had me try it. As I doodled, I got lost in the action of the pen…it was very smooth, and ink flowed out of it effortlessly. It has been a long time since I’ve used a pen that made me want to make marks on paper…not since that green Pilot in the 80s, actually. My current everyday rollerball is the Pilot G2, but this pen has more resistance and is kind of scratchy. It reminds me of work. The Lamy Rollerball reminded me of recess on a warm spring day, drawing endless doodles on the picnic table with my friends by the soccer field. 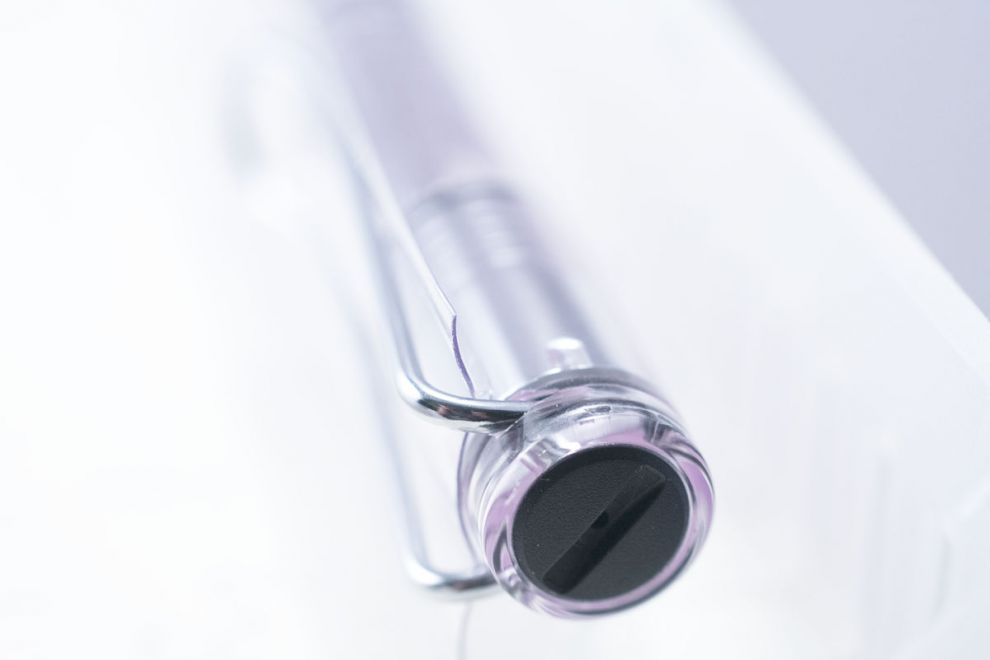 So I have my notebook, and I have my pens. I’m looking forward to making some marks on paper next time I’m in the coffee shop.