The Eglinton Brothers have started a web project they’ve dubbed Calling America, which gathers real stories from real people around the USA. The Eglintons are English, and as they say on the project’s about page, they’ve grown up as “American children by proxy”, fed by a steady stream of exported American TV, videos, music, and movies. And this youthful exposure has created something of an cultural identity conflict:

[they felt as if they were] American without ever having been to the United States. American without ever having met an American person face to face. More intimate with America than perhaps with our own native England. But soon came the New Millennium, and with it a great shock. We had reached maturity and had begun to think for ourselves. And in analyzing our youth, we had grown critical of America: it was all a construct, a figment of some wealthy Hollywood director’s imagination, a lie greater than the myth of Santa Claus! – And indeed the source of our malaise. We had built the foundations of our youth on an imaginary land and the cracks were beginning to show.

I find this a fascinating project because it aims to collect the “real stories from real people” across America. Not just for Americans either, but for people outside the country who seek to understand, drawing their own conclusions from our personal stories, not the mass media.

I also find the feeling of cultural identity conflict to be a familiar one. If you’ve never lived outside of the country, being American is one of those comfortable uniforms that you’ve always worn and never had to take off. You’ve probably never had to question it. 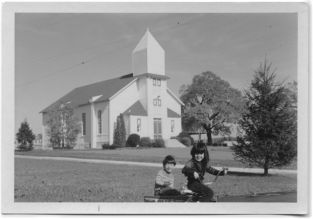 My earliest memories of childhood are of living in rural New Jersey where my Dad was the minister of a small Presbyterian church surrounded by farmland.

When I was growing up in NJ, being “Chinese” was the most distinguishing physical feature I possessed, and there were not many. Seeing another Asian family was like getting a surprise glimpse of David Hasselhoff sitting down to enjoy a Grand Slam Breakfast at Denny’s: there’s a mild shock of recognition that there’s someone you sorta know in a place you didn’t expect to find them. If the initial vibe is good, the tentative question, “Are you Thai?” or “Are you Korean?” or “Are you Chinese?” would come up, a slight tone of hope lacing the words. The real question was, “Are you like me, trying to figure out this place of our dreams and the place where we want our children to grow? Are you on the same journey, in this strange but compelling land?”

Most of the time, the answer is negative; I myself have trouble telling the difference between asians so I guess wrong all the time. But I imagine that when the answer was “Yes, I’m also from CountyX!”, there’s that surge of joy that you’ve found a potential comrade to journey with, even for a few minutes. I should ask Dad about the experience from his perspective…Dad, if you are reading this, leave a comment! He tells me that he used to get mistaken for being Latino actually, which is a whole ‘nother story :-)

In 1976, the family moved to Taiwan…going home, really, for my Mom and Dad, though they had not planned on returning. For me, a new adventure and a new culture, to which I didn’t take. I don’t know what it was that prevented this, perhaps I was already a shy kid and wasn’t comfortable meeting people. Maybe it was the highly judgmental nature of some of my relatives, or that I sucked at learning the language, and quickly withdrew into my own shell. Was I American or was I Taiwanese? I was in the country, and I was born of Taiwanese parents, and surrounded by Taiwanese family, so you’d think that it would take, especially since there was nothing to watch on TV. But it probably was that I became incredibly stubborn; I remember one day, angry and hurt about some slight I have long since forgotten, that I decided I was American, not Taiwanese. If I was going to be rejected by this culture, then SCREW THEM. I’ve mellowed out since then, thankfully; reintegrating into a culture that will probably always be foreign to us is a topic of conversation my cousins and I often talk about. It was the food, of course, that started bringing us back into the fold. And for me, it was family and community of any kind, and my increasing appreciation of my own family members as people, that has re-engaged me.

But I digress. When I returned to the US for college, I was so excited about being back in a country where I could speak the language, buy books that covered my interests, eat food that I’d missed for 10 years, and just be back in an environment that seemed like it offered opportunity, not more constraints. But then I had forgotten—and this still happens to me a lot—that I am Asian. And I also had 10 years of pop culture to catch up on, though I’d experienced some of it in Taiwan through the magic of Betamax, the importation of Dallas and Heart to Heart into Taiwan before they started dubbing it into Mandarin Chinese, and our school’s library subscriptions to Byte and Creative Computing.

I think it’s only in the past 5 years that I’ve started to catch up as the 80s become more of memory for people, but I am still getting re-acquainted with America. And I find that the best way to do that is to just listen to stories of people who come from different places. The best part is that you can find good people everywhere, people with a similar heart, and even though you have hugely different backgrounds you really are coming from “the same place”, somewhere in America.

Check out the Eglinton’s site: Calling America. This is a great idea.

UPDATE: Fixed my atrocious mangling of the Eglinton name…1 g, not 3! :-)