A couple of Emergent Task Planner enthusiasts asked for permission to post their modifications online. I think that’s awesome, so I’m sharing what they sent:

This is a neat idea I hadn’t thought of doing: “Terababy” over at The Forgotten Milk has made a variation of the Emergent Task Planner in Excel format. It is a very faithful-looking rendition of the version 1.0 ETP form. I haven’t personally evaluated the excel document [in daily use] myself to see what it is capable of doing, but I’d be curious how it’s used by people. 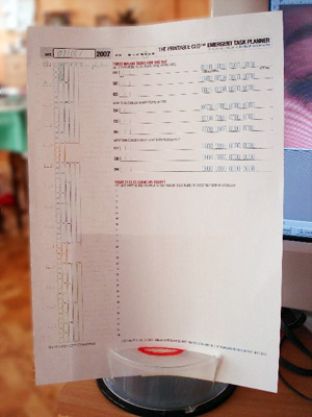 Frédéric Mikusek figured out a way of modifying the ETP to translate it into French, which is pretty awesome. I took 4 years of high school French and never really learned how to say anything, but recently my interest has been renewed because a LOT of the good cheese in the world is in France. I am stupide not to go.

Frédéric also has a cool picture of a document stand made out of an old CD-R case, using an ETP form by way of example. It’s pretty cool :-)