I’m still figuring out exactly what all these parameters tell me, so take this section with a grain of salt. 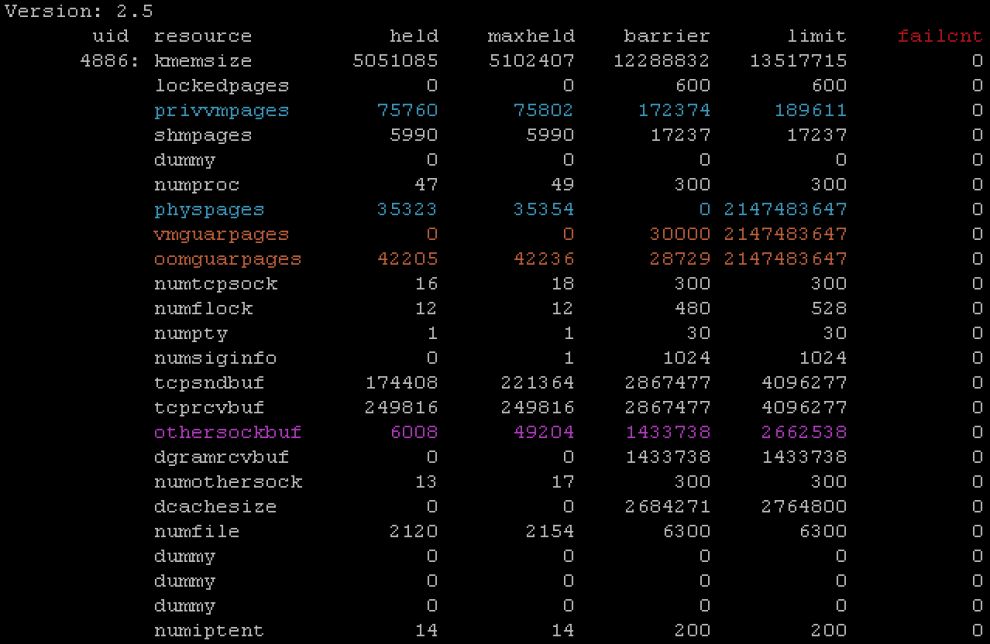 This is the output of cat /proc/user_beancounters. 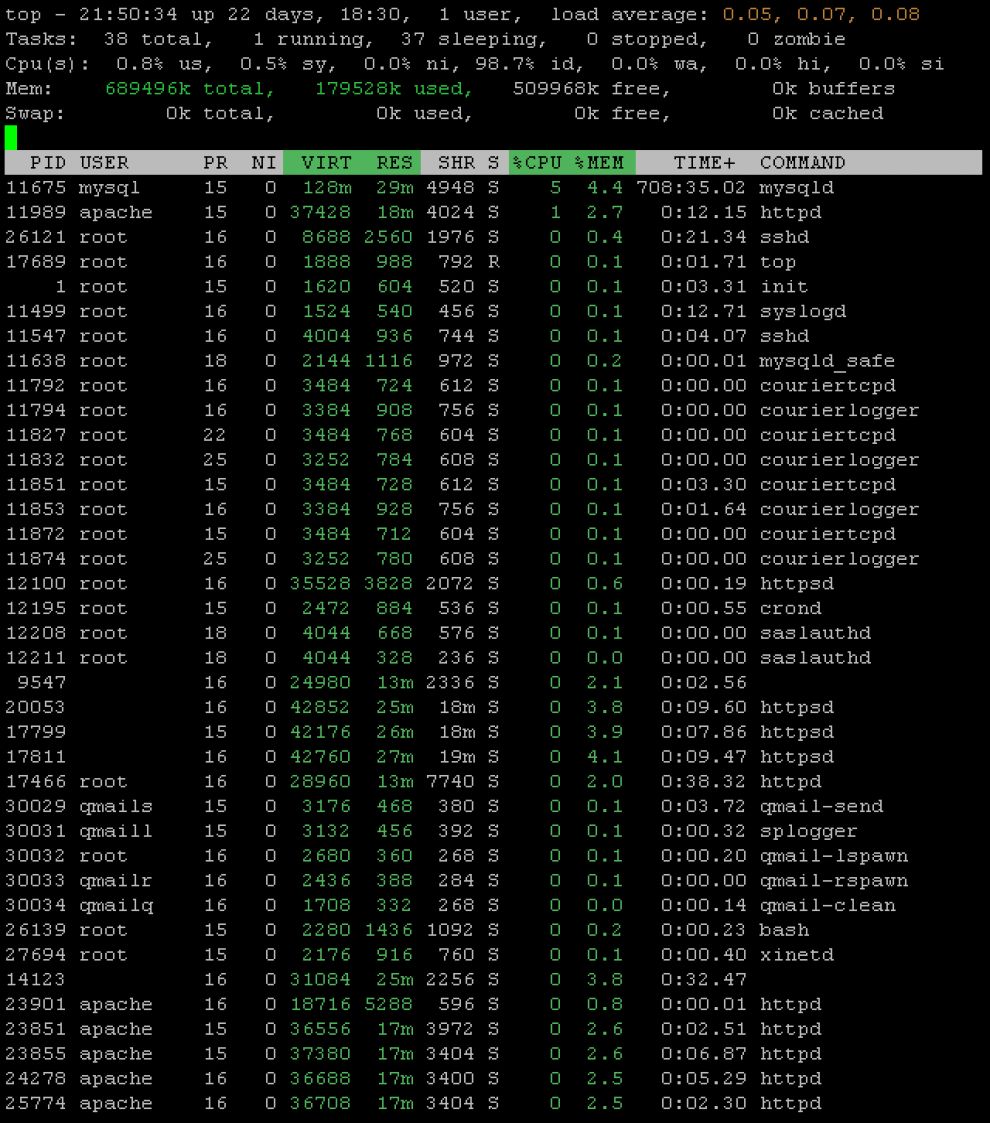 If you look in the display down a bit, you’ll see VIRT and RES, which shows you how much memory is being used by each running process, also in terms of allocation (VIRT) and actual use (RES). This isn’t an exact count, though; if you sum up the numbers you’ll get more than mem total and mem used. That’s because a lot of code is shared and used by more than one process.

One thing you’ll want to look for is to make sure you’re not seeing too many running processes competing for memory. For example, count up the number of httpd (web server) processes and smtpd (mail) processes. You’ll also want to see which processes might be hogging the CPU by looking at the cpu column; as top updates, the most hoggy processes will be shown at the top by default unless you have changed the sort order, which I never remember how to do. If you see something taking 100% CPU for an extended period of time, that’s a good sign something isn’t right.

So my VPS is supposed to have 256MB of memory allocated to it. So WHY THEN does mem total exceed that and say I have 689MB? That’s because mem total includes swap disk space, though the swap disk doesn’t show up in the VPS directly. To ensure that I don’t go to swap, which is slower, I make sure that mem used doesn’t exceed 256MB. The whole beginning of this article describes what I did to balance the resources.

Finally, the load average at the upper left (in orange) shows some nice low numbers. A range between 0 and 1 is pretty lightly loaded, 1-3 is moderately loaded, and above 3 you’re starting to see some strain.

Here’s what mine looks like when I click Server (left panel) then Statistics (first line, under System). This is just the first line:

You should recognize the mem total and mem used values here, which also correspond to privvmpages and physpages. Remember that a “page” is 4K.

I actually haven’t seen the Shared and Buffer values go up before…they may have before I constrained my server configuration. I would rather stay within my allocation, though, and try to achieve a level of consistent performance.

There’s no swap disk in use here. It’s a virtual server, so there’s no actual swap disk. The Virtuozzo system takes care of this behind the scenes (I think).

Now, if you go to the Virtuozzo panel, then Resources -> Extended, you’ll see something like this below: 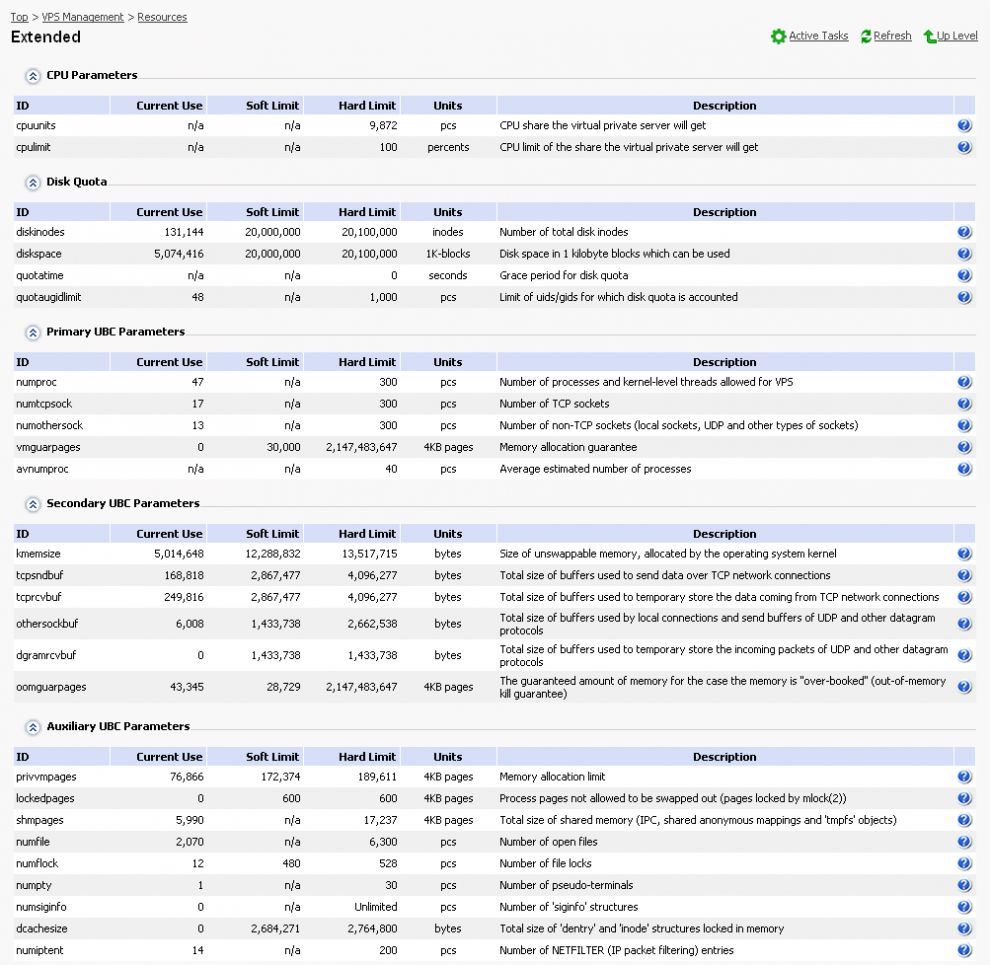 One thing to remember about these values is that they’re constantly changing. Finding out what’s causing a particular memory overage means that you have to watch how these values change in real time. I did this by opening a couple of shell windows, then running top and cat /proc/user_beancounters in them. There may be a more sophisticated way of doing this, but I’m a noob at this stuff.

There are a few logfiles I monitored simultaneously in other shell windows. Here’s what my setup looked like while I was watching: 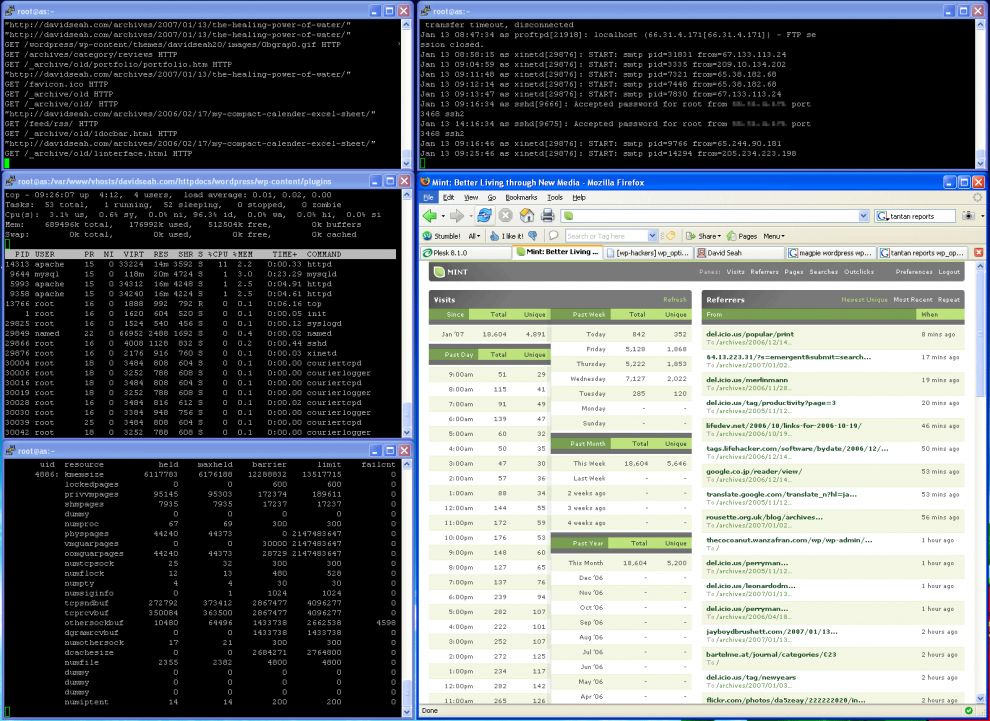 The top left window shows filtered output from the apache log, which I do with the following command line: tail -f ~user/statistics/logs/access_log | grep -o -f ~/match-web

~user is the “ftp user” defined in Plesk for your particular domain, and ~/match-web is a file in the root user’s directory that contains the following lines:

This makes the live output from the web server a little more focused on pageloads, so you can get an idea how much is going on.

On my server, the message log rotates between messages.1, messages.2, etc, so you might have to dig for it. Anyway, watching this log in real time shows me what’s going on, like smtp connections (email) and attempts to break into the server by automated scripts. It’s very irritating to watch, but it allowed me to figure out that it was smtp that was creating some problems in conjunction with the other windows.

The two bottom left windows are the top command and while true ; do cat /proc/user_beancounters ; sleep 1 ; done command. If I saw a sudden surge in %CPU or an increase in the failcnt (in this screenshot you can see that the othersockbuf problem was still happening), I could look at the top two windows and see what happened.

Finally, the bottom right-window is my Mint installation, showing me the traffic stats for my website. This gave me an idea of how heavily loaded the server was, and I could monitor the various windows to see what was going on.