This is an obsolete article. You should visit the most recent Emergent Task Planner page unless you are browsing for historical content. 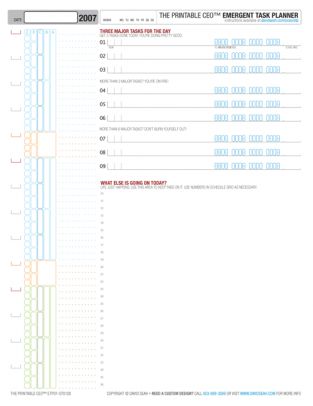 I’ve been nose-down with in projects for the past couple weeks, and have not been doing very much with my own personal scheduling. As a result, my sleep cycle is out of whack again, and I’d like to move back toward establishing a working rhythm. As I work at home it’s up to me to establish the rhythm for myself, which is the purpose of the Emergent Task Planner.

I’ve made a few updates to the form to clarify its pacing mechanism. The original version was an experimental form derived from the older Menu of the Day. The primary difference is that MotD incorporates goal tracking, while the ETP is a more general purpose planning form. It’s not surprising more people find the ETP useful. 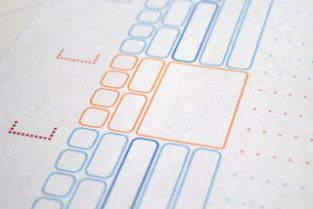 Several people had commented that they tend to have lunch at different times, but the old version of the form had a giant one-hour block of time. The idea behind this form is to establish pacing, so I had deliberately made lunch an inviolate block of time. However, I see what people mean, so I’ve introduced 15 and 30 minute chunks during that time period. This retains the general idea that there should be a break in activities after 4 hours of work, but doesn’t beat you over the head with it anymore. 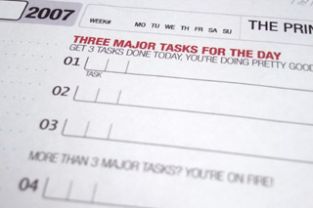 I had come to the realization that during the course of a busy day, I would be extremely lucky if I got just three of the major things I needed done out of the way. To me, a major task is something that takes at least an hour of uninterrupted work to get something done. This is harder than it sounds in a world of meetings, clients calling unexpectedly, and handling business opportunities and family during the day.

Rather than beat myself up over this, I decided that I would just focus on 3 tasks a day, and accept that this was a reasonable amount of work to get done in a day. That was a huge concession, because I used to think I should get a lot more done, and always felt I was falling short. The better way to think about this, though, is to accept that any progress is good. Take the three points, and feel good.

Still, there are days when you might get more than three tasks done to completion, so I have two additional groups of three for those situations. These are bonus tasks. If you can level-up to 4 or even 7 tasks completed in a day, you’re kicking ass.

The older version of the ETP didn’t make this grouping clear, so people might have wondered why there were just 9 tasks listed. This is why.

As an aside, the idea of using “bursts” of tasks came from reading about the history of submachine guns. It’s much easier to control a quick burst of three shots than a continuous stream of fire. This reminded me of really long to-do lists, tasks spraying out of control ineffectively stressing everyone out. But a burst of three tasks? Much more doable, focused, and likely just as effective. 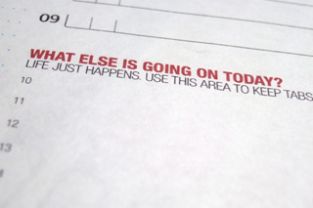 So what happens when unexpected tasks pop up? Scribble ’em down in the “what else is going on” section. If you need to actually note something important in the schedule grid, write it down near one of the small numbers in the left-hand side of this area, and stick that number in the grid. This is just a suggestion; feel free to use this area as a scratch area for the remainder of the day.

These forms replace the old ones, so you can either grab them on the original page (which also explains how to use the form in more detail) or click right here:

If these don’t quite meet your needs, feel free to inquire about having a custom variation made. As an experiment in online commerce, I’ll charge $50 per variation, which will include the electronic delivery of your custom printable PDF. Please use the Contact Form to let me know if you’re interested, so I have an email address for ya. Someone made the effort to call me about one, but never followed up in email, so his chance of making Printable CEO™ history has been lost.