This is my first “real” paid review through the ReviewMe service. Today’s topic: easy online remote backup! The product in review: Data Deposit Box from Acpana Business Systems Inc., a Canadian company based in Toronto.

I’m pretty meticulous about backing up my data. When I was a happy-go-lucky kid in high school, I remember working all night on some paper or program, only to accidentally LOSE HUGE TRACTS OF IT because I forgot to save. Or I would accidentally save over the wrong file, destroying a critical fragment of my personal history. Small disasters of this kind would occassionally crop up even through grad school; I might be working on some Photoshop file on a System 8.x Mac, and then the entire computer would lock up for some unknown reason. Hours of work lost, much cursing and swearing ensued.

So I evolved. I have an automatic “save” habit that kicks in everytime I pause to reflect. I automatically save new versions of files, with new filenames, using a versioning system. I archive and copy across multiple disks on multiple computers when possible, and burn to CD. I use version control software. I’ve gone through great lengths to separate the operating system, applications, and data onto physically separate drives; that way, if I have to restore my operating system due to some catastrophe, my DATA will not be erased in the process.

Frankly, I’m kind of a nut about data archiving and redundancy, but normal people have better things to do with their time. Occasionally, one of them will ask me how they too can not lose all their mail every time they upgrade to a new computer, or perhaps they’ve experienced for the Nth time some horrible loss of an important file due to a hardware failure. I tell them what I do, and their eyes glaze over. Most people find this to be a chore, but I actually like it, for some perverse reason. It’s my version of gardening, I guess.

Which is why I found the prospect of reviewing Data Deposit Box interesting. It claims to be designed specifically for non-technical people, secure via its on-the-fly data encryption, and affordable at 2 bucks per gigabyte a month, paying only for what you use. While I don’t have a particular need for it, I know lots of people would rather have a service take care of this for them. Let’s take a quick look.

Data Deposit Box (DDB) runs on Windows PCs, and installs as a program that monitors certain folders of your choice. Whenever a change is made to the contents of that folder (say, your “My Documents” folder), DDB detects that and then uploads the file to their encrypted server over the Internet. The cool thing is that once you tell DDB which folders to monitor, you don’t have to do a darn thing except leave your computer on long enough so it can do its thing. If you’re in the habit of turning off your computer every time you are not using it, then this program will probably not work for you. I leave my computer on overnight so it can run its daily virus check, so it works well with me.

Because DDB runs in the background, I was particularly concerned about how well behaved it is with respect to other applications. I’m constantly running big apps like Photoshop, Illustrator, Flash, and Dreamweaver with Excel, Thunderbird, Firefox, and Word open in the background. I am very sensitive to any program that gets slow and bogs the computer. There are several things I check for when installing a new system-level utility like this.

p>Then I ran the Installer, and braced myself.

The first thing the installer asks (after making you accept the End User License Agreement) is what folders to watch. By default it will monitor:

That’s a pretty good default list for most people, and you can modify it later if you wish. Since I keep all my data elsewhere, I unchecked the defautls set the folders manually after installation.

DDB installs a task tray icon that allows you to pull up the main dialog. Here’s some screen shots:

The main dialog box. The main options I used were OPTIONS (to select which folders to back up and how) and RESTORE (to check that it really worked). 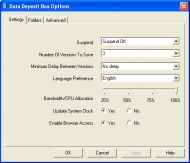 Here’s the settings for the program. You can see you have some options on the number of versions to save per file (you can have up to 21, though I was unable to determine how to access any particular one) and how aggressive to be in terms of bandwidth and CPU hogging. 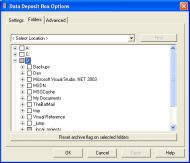 This is where you set which folders to watch. When a file changes, DDB will start uploading the changes in the background using your Internet connection.

In case you’re wondering, the Advanced tab allows you to set Proxy Internet settings (if you have a proxy server that sits between you and the Internet, like at work) and where to store temporary files.

After I set the folders to watch (about 35MB of files), I did some reading while watching the uploads out of the corner of my eye. The first thing DDB does when it activates is do a version check of all the files under its care; this can take a while. Then, it uploads the changed files to the server. On my cable modem connection, my upstream rate (i.e.: the fastest I can upload) is about 50K a second, so 35MB takes a bit of time to sync up. This is the kind of thing you’d probably want to run overnight, or if it’s running during the day you would probably want to set the Bandwidth/CPU Allocation on the Options dialog to less than 100%.

The files are all encrypted, though I’m not sure what key it uses to encrypt them.

After you’ve uploaded the files, you can click on the RESTORE button and get a list of files you can recover back to your computer. This seemed to work. As I mentioned, I couldn’t determine how to access the versions of a file. I edited a text file a few times to see how quickly DDB would pick up on the changes and upload it. I wanted to restore the very first version, but didn’t see how to do it immediately. It might be a buried option somewhere.

Once your files are uploaded, you can choose to share them with people. This is not a file sharing service for MP3s, mind you (this is expressly forbidden in the EULA), but if you have a client that you’d like to provide a file to, you can do that on either the folder or file level. You can do all this through the online interface.

This part of the experience, actually, was a little less robust than the rest of the application. When you delete files, the tree view showing all my folders didn’t update, so I was unsure if anything actually had happened. I forced a page refresh to see that it worked. A couple times I saw a database connection error, which was less than reassuring. The interface could use a little smoothing out, I think, but it was otherwise pretty usable.

One other note: the file sharing URLs that the system generates are ludicrously long. They’re prone to wrapping in an email message, which creates problems when distributing links to people.

Because the ReviewMe terms allowed only 2 business days to write this, I can tell you about long-term stability of the program. However, I can tell you that the experience was not bad. I didn’t experience processor issue or problems with the installation, and the program did seem to work as advertised. I didn’t notice anything that would make me uninstall the program immediately, which is actually kind of unusual. Any of the following are grounds for banishment from my system:

I didn’t experience any of that, so I would say that the desktop component was surprisingly good. There are a few confusing UI spots, but it behaved well and seemed to do the job. The help button isn’t context-sensitive, for example…that’s a minor quibble. I was happy that my system didn’t get bogged down with this running continuously. And, it’s not ugly or filled with questionably-useful graphic imagery, and I didn’t get cross-sold on “other wonderful products you might be interested in”.

I was a little less impressed with the robustness of the Internet side of things. It looks like a solid “Web 1.0” application, but seeing an ODBC database connection error on the “My Data” page does not fill me with good cheer. The experience is almost there, and may be above average for services of this kind, but my daily web experience revolves around Web 2.0 apps like BaseCamp, and they are shockingly robust. The bar has been raised!

What about the Cost?

This isn’t a free service, so you have to weigh the cost/ease of use between their service and just buying a big external hard drive.

Data Deposit Box Pros: Works in the background, and it behaves with the rest of the system (at least, in my limited experience). Don’t have to think about it, and data is sharable with other people. Backup is also offsite, so if something happens to your office, your data is safely somewhere else.

There are some other uses I can think of immediately:

So while I can’t make any long-term assessments on the product, my initial impression is quite favorable. Certainly worth a look. It lasted on my system way longer than Adobe’s Version Cue software, which was so slow I thought my computer had crashed. All that process monitoring software didn’t raise a single red flag in my brief session.

There’s a 14-day free trial available. I think I’m using it now. That reminds me, it would be nice to see some kind of feedback about how the free trial works before you hand over your credit card number…that is offputting enough for me to not even want try the service.

Again, this was a paid review booked through ReviewMe.