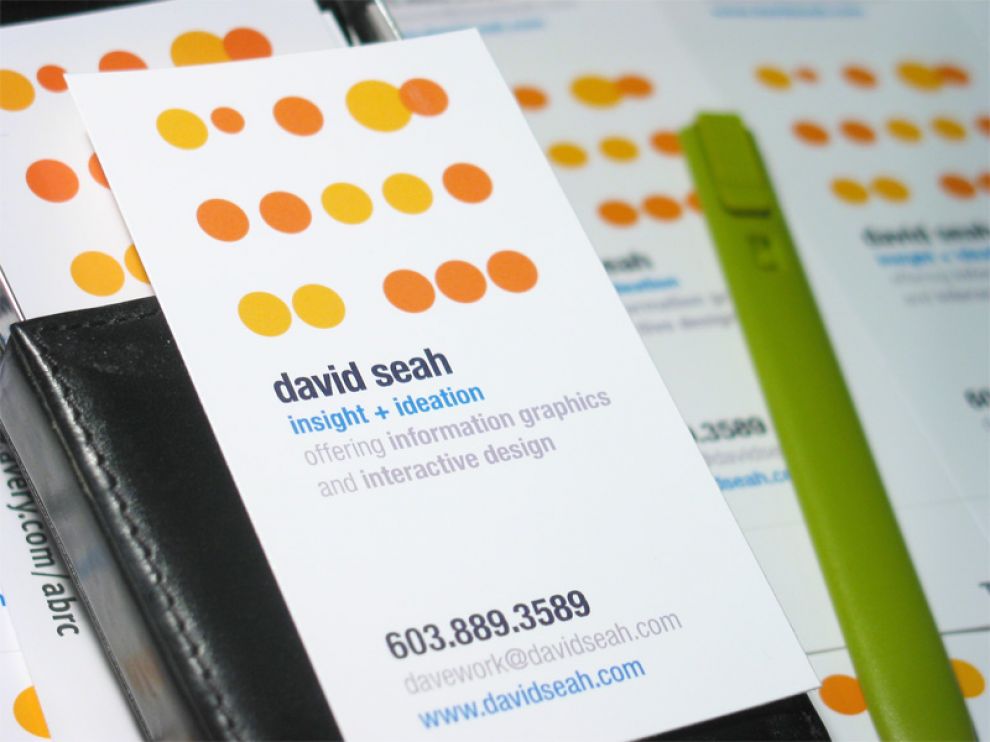 When I last visited my business card design, I was having trouble resolving the whole “dot story / text” thing. Plenty of people weighed in with excellent comments. The conclusion: well, you can’t please everyone.

Still, in the back of my mind, I thought there was something that could be improved, but I just couldn’t quite see it. That was a good sign that I should step way back and not think about the design for a while. That was back in August. Curiously, I haven’t had to hand out any cards during that time. However, SXSW is coming up, and I might need cards for Barcamp Manchester, so I spent an hour or so working on them. 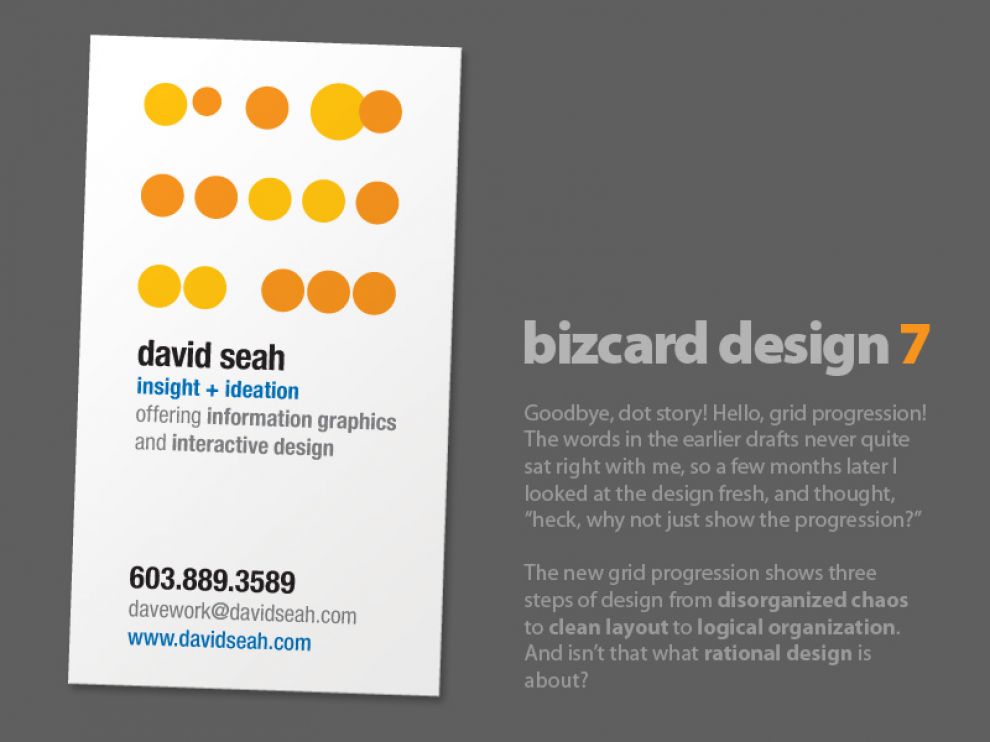 When I look back at last round of design, I can see some good elements obfuscated by conflicting messages. The messages:

Some people got it, some found the text distracting, still others argued about the use of bold, arrows, and underlined text. The problem is, I think, a message that when put into words sounds very specific in its intent, yet is quite open to interpretation. The graphic never really did fill the space well either, creating a somewhat clunky white space that I never resolved. Compounding the problem was the difficulty in choosing a good place for the expository text to sit close enough to the dots.

As I reassessed the card design, I had the notion that maybe I should just show a middle step. I started with another row of three dots. I bumped all the rows up to 5 when I figured that I could also show grouping using color as a coding scheme; plus, 5 dots seemed to balance nicely. The result: a progression from “chaotic” information, to an “organized” state, and then to an “informationally grouped” state. It’s a design cycle in a nutshell, which tells almost the same story as before but without words. I also moved my name to the bottom of the dot group so it could serve as a kind of punctuation; I’m hoping that an observant viewer will find the patterns in the rows of dots by scanning them from top to bottom, and after he/she puts the pattern together, my name/work is the next thing seen.

Bonus 1: Without the “this is three dots, this is a story” text, the dots become more open to interpretation, which might head off disagreements. The dot story works for a few people, but some people just don’t get it. That’s not a problem actually, since I would prefer to work with people who DO like it. Nevertheless, I count the ambiguous-yet-inviting nature of the pattern as a small benefit.

Bonus 2: the additional dots fill the space sooo much more nicely. I was able to pull a nice golden rectangle out of the combination of dots and text and center my name in the middle of the card. I think it reads pretty cleanly, and the visual balance feels about right to me. There’s a rhythm to the layout that is not too rigid, thanks to the organic “chaotic dots” at the top of the graphic: a welcome two-for-one.

I also pushed the top margin upwards a bit compared to the bottom margin to get a taller aspect ratio (visually speaking) out of the layout. This creates a second golden ratio (2:1), which is pleasing. It’s not exact, but close enough to impart a slightly architectural feel to the card.

I’m a little torn on the whitespace between the contact information and the name/services text. Should I have made it an exact multiple of the height of the contact information box, creating a stronger visual pattern? I ended up breaking it, because it didn’t feel right to me. Instead, I mirror the spacing between the bottom of the card and the “www.davidseah.com” text with the space between “davidseah” and the dots. I think the extra space was probably necessary to give the blocks of text their own identity and separation; using an exact multiple would have probably ended up grouping everything into one and would have looked clumpish.

The original card said “information graphic designer”, which always seemed a little awkward to me. Plus, it still puts me into the services category, albeit a more focused one compared to “designer”. After talking with a few people last month, I’ve come to realize that I really like doing more of the conceptual work: finding patterns, solving problems, working as a sounding board, and so forth. With that in mind, I put the insight + ideation tag under my name. Damn, I could have also put inspiration there too. Oh well, when I go to print I’ll consider putting ideation + insight + inspiration under the name. It’s a little different than the usual business card which would list a title or a role, but this is a drive to reposition myself in the market. Therefore, I’ve listed it prominently. Hopefully the new progression of dots supports the tagline in people’s minds. It does if you sort of squint at it.

Having a new positioning line is fine, but what people want to know what you do. The line “offering information graphics and interactive design” is specific enough, I think, without pigeonholing me. It will be up to me and my two-minute elevator pitch to further explain the dots and myself in person.

Lastly, I’ve chosen to bold the phone number in the same way as my name, subtly hinting that you should call me. The blue text has no meaning other than it’s vaguely hyperlink-ish (hence its use in www.davidseah.com). I used it again for “insight + ideation” because the repetition looks nice, and the blue is an energetic color complement to the oranges. The last bits of information are in gray, because these are the least important bits of information on the page, and it helps the important bits stand out more. Plus, gray + orange always looks nice to my eye: energetic, but not too over-the-top. I picked the gray tone to be similar in value to the orange dots too instinctually…I think the weight is pretty close to ideal. It could be a little darker for the email address though; because the text isn’t bold as it is for “information graphics and interactive design”, I’d have to darken it more to compensate. I can probably safely ignore it.

Other than the small nits I’ve found, I think I’m pretty happy with this final iteration. I’m on the fence about expanding the tagline from “insight + ideation” to “ideation + insight + inspiration”; the latter sounds a little fruity, while “insight + ideation” sounds positive enough without getting too touchy-feely. Maybe I’ll change my mind later…we’ll see how I feel a few months from now.

After multiple discussions, I think the white space IS a little too large. But by how much? I do like the adjusted one better, because it feels better packed, but it’s subtle enough that I’m wondering if I’m imagining things: 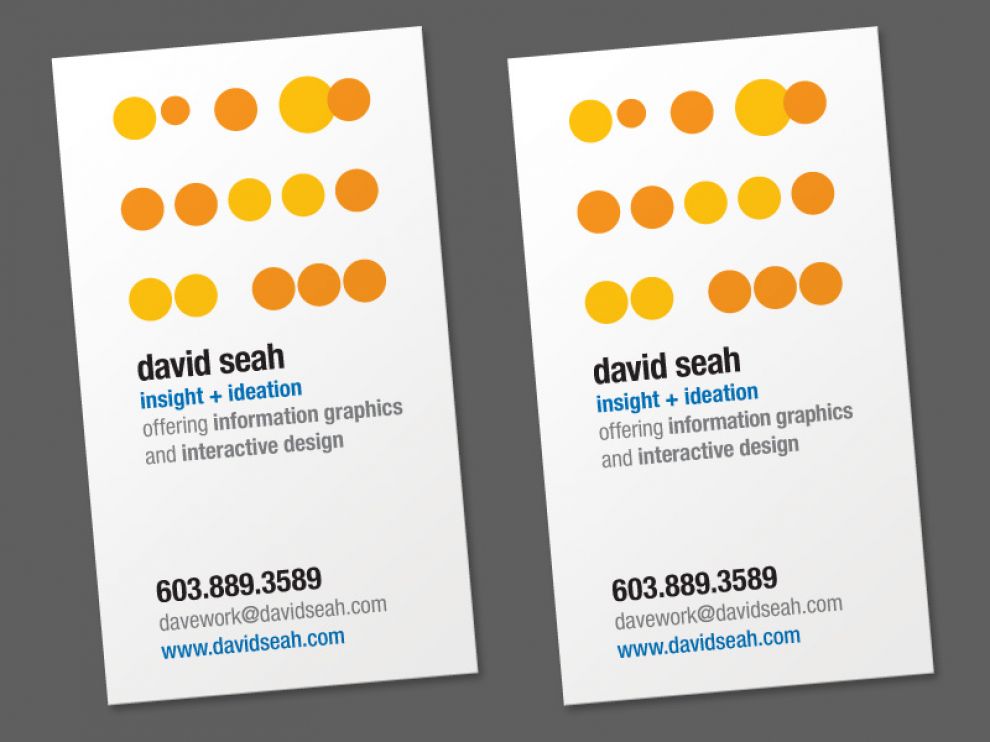