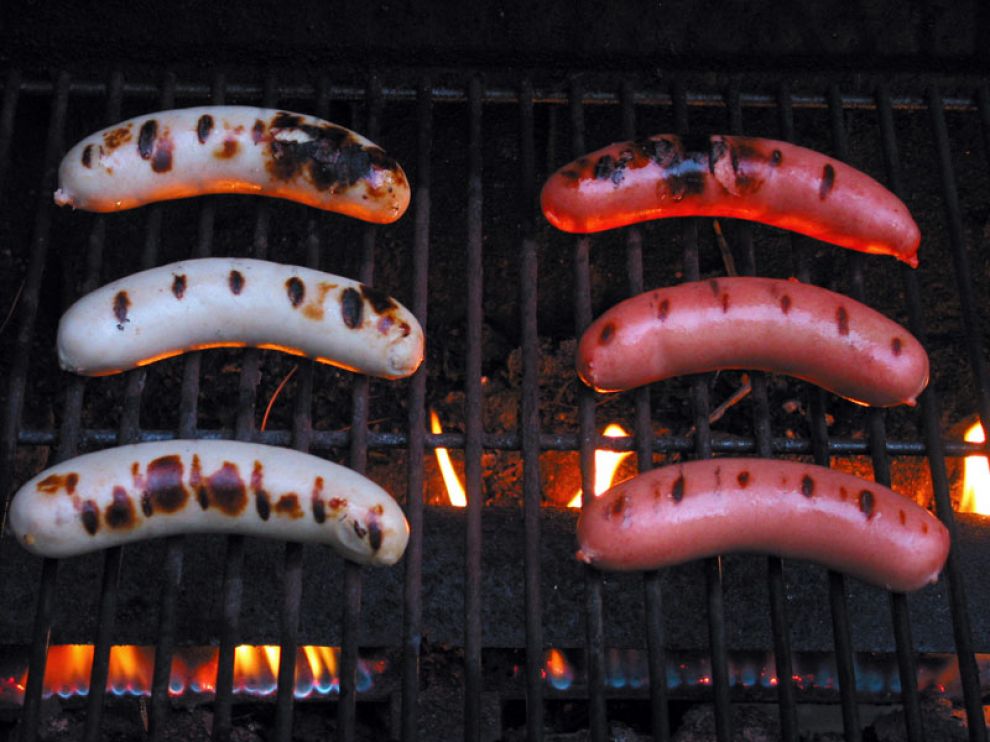 Last May my sister Emily had a tremendous idea for Memorial Day: relive the hot dogs of our youth. Actually, that’s not quite correct…we wanted to relive the hot dog that our Dad remembers from his pastorin’ days back in the ’60s: the Rochester White Hot. Dad used to live in Upstate NY as an assistant pastor in Brighton before I was born. As it so happened, I went to both the University of Rochester and Rochester Institute of Technology for grad schoolin’, so this bit of Americana overlaps both of our personal histories. I must have even been the same age as Dad when he was in the area…eerie!

Every time Dad visits, we ask him if there was anything he misses from living in the US. Without fail he says, “White hots. And good cheese.” For a long time I thought this just meant any of the white hot dogs you can get in the refrigerated section of the supermarket, but Dad said these weren’t quite right. We even went to a German deli staffed by authentic German frauleins and looked at the white sausages there, but even these were not the hots we were looking for. They were good, but they not the White Hots of Dad’s memory. Not even close.

Em dug up this link to The American Museum of Natural History, which at one time featured a selection of ball park franks as part of their Baseball as America exhibition. Apparently, Rochester NY has a regional hot dog that’s produced most famously by Zweigles. It’s made of uncured, unsmoked pork, which is what gives it the white color. The American Museum of Natural History’s description goes into a bit more detail on how the hotdog is served:

Split and griddled, this dog is served on a toasted bun and topped with a hot sauce (a meat chili made from a secret Rochester recipe), chopped onions, and any one of a variety of mustards.

Emily further recalled the joy of another Rochester brand, Nance’s Sharp and Creamy Mustard, that she had once enjoyed at my house. It’s one of my favorite mustards, though I wish I could remember who first recommended it to me. Em likes it too, so I was able to get a bottle of it at the local Hannaford’s supermarket. 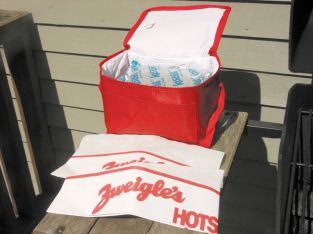 Dad was originally planning to visit this June (sadly cancelled), so Emily arranged to order a variety pack of Zweigles Hots from NewYorkStyleDeli.com. The prices are a bit high if you pick and choose, but the specials are actually pretty reasonable when you consider the hassle of shipping perishable food overnight. Our package arrived just prior to the Memorial Day weekend in a nifty red cooler with freezer packs all around it. NY Style Deli also included two paper Zweigles hats to wear while grilling…an unexpectedly awesome touch :-) 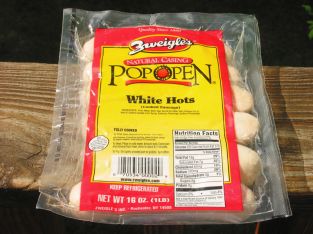 Here’s a pack of genuine Zweigle’s White Hots. Since they’re uncured, they’re highly perishable, so once you open the package you’re pretty much committing yourself to eating them all or freezing them later. I don’t really like to freeze hot dogs because it seems to do terrible things to their texture…I could just be imagining that though. 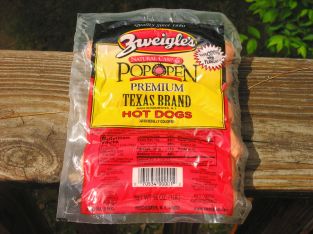 Our variety pack included some Red Hots, which we grilled for comparison. There were some skinless skinnier hot dogs too, but I didn’t bother to take a picture.

Emily also found a recipe for the secret Rochester meat sauce mentioned by the museum. I don’t have the link, but it was similar to this one on David Rosengarten’s site. It’s possible that this meat sauce is related to the “hot sauce” they put on the infamous Rochester Garbage Plate, a “specialty” that I never dared try myself when I lived in the area. I must admit I am curious now, looking at this picture. NewYorkStyleDeli.com sells a Hot Meat Sauce Mix for $2.99 too, but what fun is that?

With all our preparations complete, we had a problem: neither of us had ever seen or eaten an authentic Rochester White Hot. I wasn’t even sure what one looked like. There was a small, low-resolution photo of the American Museum of Natural History site, so we used that as our model. Here are a few quick photos I took before eating. Unfortunately my indoor lighting setup is half-broken and I’ve been having some white balancing problems (my gray card may be too old), so the color is a little off: 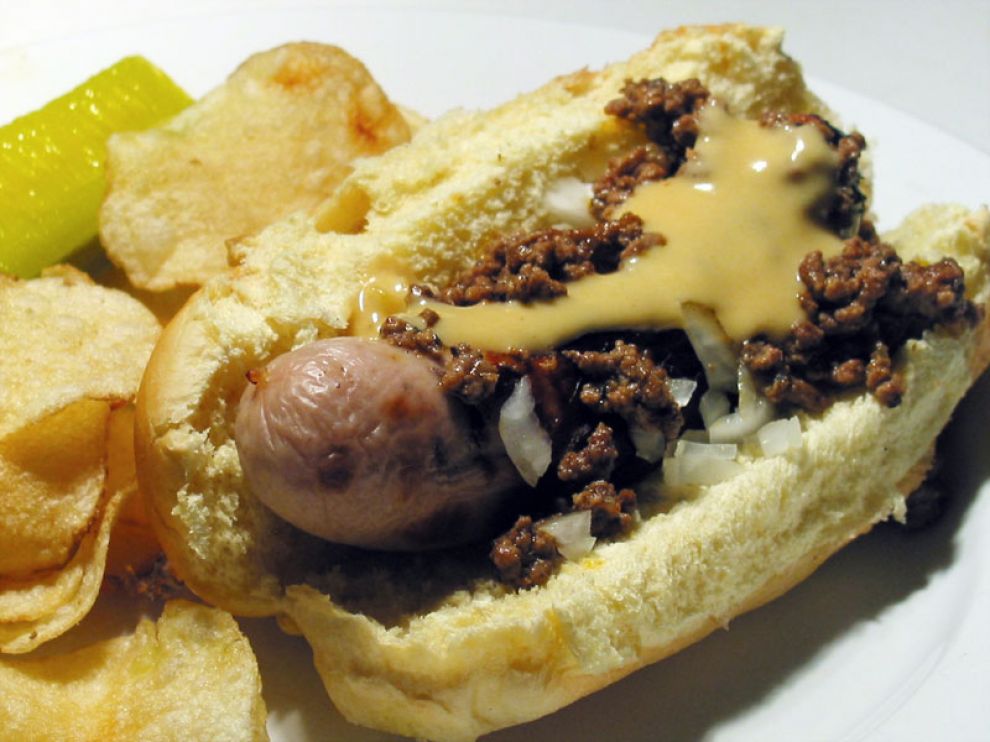 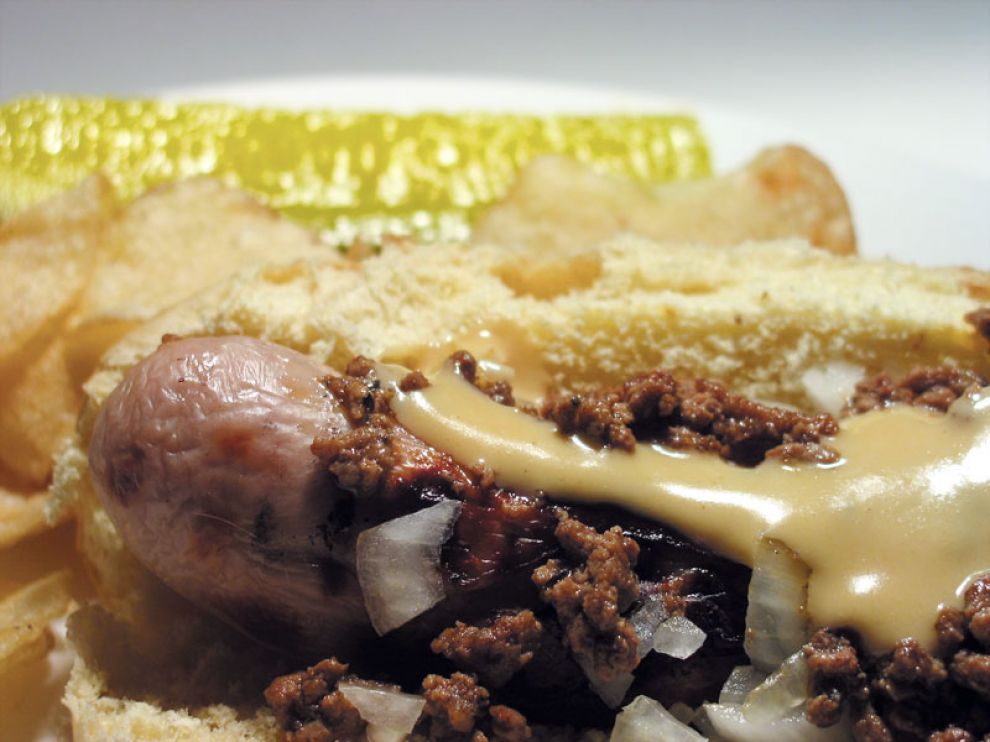 I later re-read the recipe, and noted that pan-fried hots are split in half; not sure if that would have been more authentic. But they were still pretty darn good. If there are any Rochester natives reading this, send me a picture of the real thing!

p>For the Fourth of July, Em and I will be recreating bien dang, the taiwan lunchbox one buys when travelling. I remember these fondly from car trips and train rides we took when first arriving in Taiwan; they’re also readily available for the lunchtime crowd in any town or city. I have been working on recreating the pork chop recipe so we can make these and maybe drive somewhere to eat them :-)