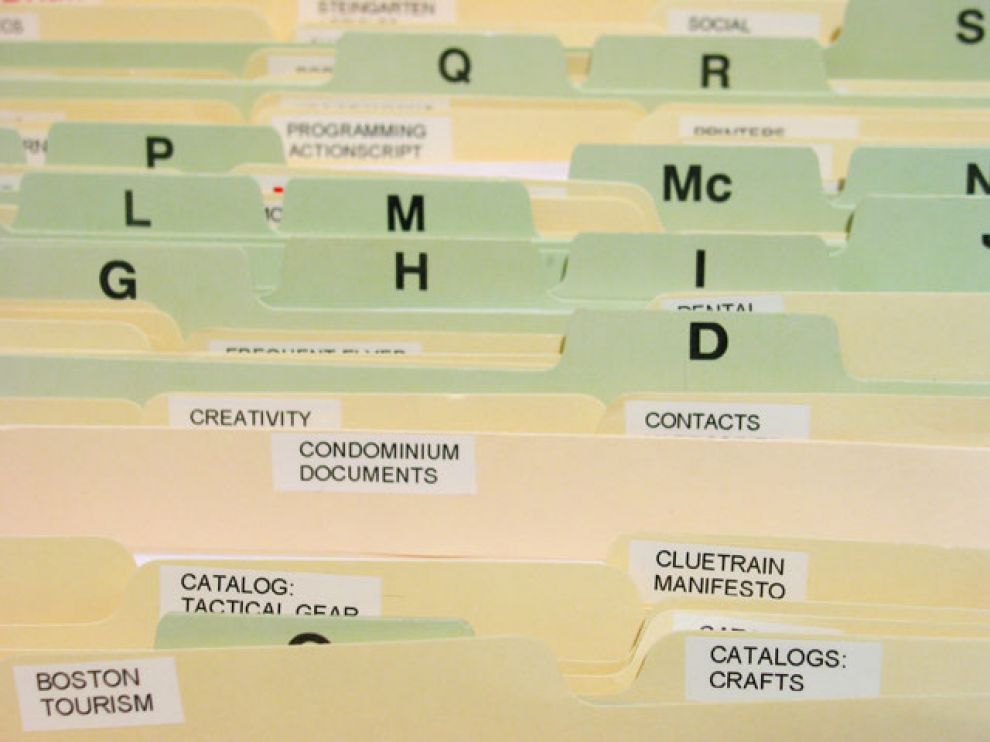 It’s the second day (or rather, half-day) of trying out GTD. I went through the big pile of “stuff” from yesterday and converted it into actual reference material! Some of this stuff I’d been carrying around for years, never quite sure how to save it so I could find it again. The GTD suggestion of creating general file system, simply alphabetized, was a revelation. In hindsight, it seems quite obvious.

The experience was not unlike surfing the web all day, except I was surfing my own stuff. Tagging and bookmarking proceeded from that. Cool!

I’ve been thinking about visible role models a lot recently, and how being around people who “know the ropes” is a critical part of learning. In school, it’s like we “learn about” instead of “learn from”, at least in the introductory levels. What would it have been like to have been apprenticed to a master secretary? What secret skills would I have learned? It would be interesting to spend a day with a secretary at a large company and see what he or she does to keep things organized.

While I’m fairly new to paper filesystems, I’ve worked with digital filesystems plenty, tracking assets for various video games to make sure we knew what they were, and how they were used. As a result of this experience, my computer filesystem is fairly structured into project folders. There is, however, no “general filing” on my computer, and I’m thinking I will want to duplicate the physical folder names on my computer to help with consistency.

Allen is entirely right about the simple alphabetical filing system. In the past, I might have gotten caught up in creating some kind of taxonomy of subjects, and nothing ever would have gotten done. The experience of tagging things ad-hoc may have prepared me for this, as I didn’t obsess too much over how things were named. This is a personal filing system, so I will be able to keep track of what is where. The system may not win any prizes for elegance, but it works. It’s such an odd feeling to know where everything is.

The process of labeling folders and content for filing also provided a tangible sense of accomplishment. As the pile got smaller, the number of organized folders grew larger. It just wouldn’t have been the same if I hadn’t started with the pile; seeing the pile get “processed” into organized bliss is much cooler than just watching organized bliss appear, which is what would have happened if I’d just wandered around and took piles from various parts of the room.

There were some items that were awkwardly shaped or didn’t really belong in the file cabinet, like my stash of greeting cards, sticker sheets, postage, appliance manuals, road maps of Massachusetts, and so on. I’ve wanted to use inter-office memo envelopes for a project filing system for a long time. I’d also seen them on various cop dramas, where they’re used for holding the personal items of convicts or evidence from a crime scene. 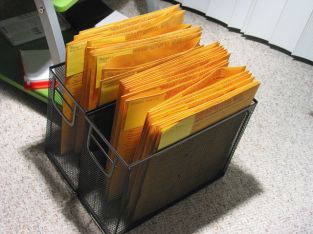 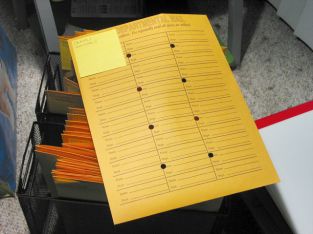 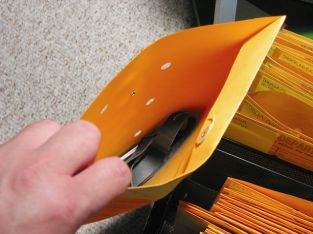 I took a bunch of envelopes and ticked in the flap so it would be easy to drop things into them. The envelopes are generally stiff enough to stand up like you see them here. The envelopes are labeled with super-sticky Post-It pads, which will eventually get replaced with actual laminated labels.

I may also use these envelopes for project archiving, as the little string makes it pretty easy to “seal” them without adhesives.

I still have a lot of in-box processing to do in the morning, which will be the beginning of the real GTD sorting process. Right now, I’m just happy that my piles of stuff have been transformed into piles of useful reference. Rock!