I finally got my act together and finished processing my inbox, which didn’t take as long as I thought it would. Here’s what’s I’ve gotten through so far, as far as process.

Processing the in-box isn’t as daunting as I thought

After I had filed, sorted, and piled things into the right place, there were only about 50 outstanding things that were on my mind. Things that I could do quickly I did: scanning URLs, invoicing people, opening bills and processing them…it was rather relaxing.

The tricky part was figuring out what to do with some of the things, since you’re not allowed to put things back into the in-box. My processing went like this:

Having a place to put things was the minor challenge, particularly for the pending items that I didn’t want to do right away. 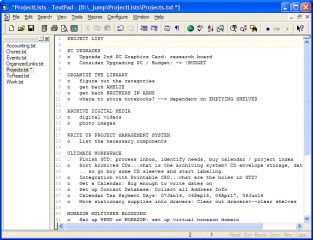 Tasks that would take more time I entered into an ad-hoc list system based on the text editor TextPad. TextPad can save a “workspace” that loads all these textfiles at once. I thought about using a Wiki, but I find them cumbersome. A straightforward text editor with a document selector works just fine.

Now that I have these tasks captured, I’m realizing that GTD doesn’t really give me a system to figure out what to do next, once all the 2-minute tasks are done.

GTD doesn’t recommend “emergency scanning” of the in-box, because this prevents you from really emptying it. Once you’ve emptied the in-box and stripped away all the non-actionable items, you end up with a “pending projects” list which needs prioritization or some attack strategy. Which items do you do first?

GTD doesn’t recommend a particular project management methodology, so I just will insert my own.

Since I’ve put my list management on my main production computer, I want to make sure that it’s easy to access anywhere, anytime. 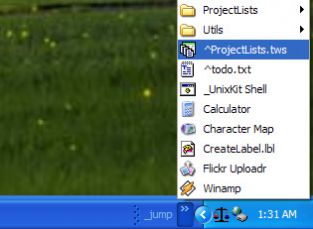 I have a convenient folder shortcut on my desktop’s toolbar for the programs and utilities I run most frequently. The folder actually contains the project lists; when I want to open up all of them at once, I select the workspace file. This folder shortcut thing, incidentally, is built-into Windows XP. 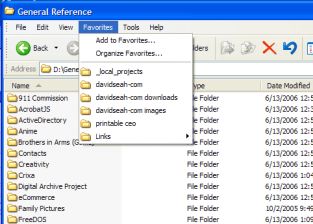 I also set up a computer mirror of the General Reference file I have, and processed all the crap on my desktop into it.

I also created a Visual Reference file, to store the various bits of graphical inspiration I find around the Internet.

I set up folder shortcuts to the most-commonly used folders on my computer. You can see them in the dropdown menu.

Right now, all this is stored on my production machine, but I’ll have to centralize it all on my file server so all the PCs and the Mac can get at it. I’ll just dump ’em all in the same folder, but I may have to sub-divide the folders into alphabetical groups.

Starting off the Day

Here’s my procedure for tomorrow, which I’m totally making up:

Night Prior: Pull out the Tickler folder for tomorrow and put it on my desk. If there are things I’d like to do tomorrow, put the item in the folder. This is sort of a GTD no-no, because I’m creating a physical pile of To Do items. If I allow myself to feel OK about not getting to all of them, though, that’s probably OK.

End of the Week:

The collection of Emergent Task Tracker forms should give me a good idea of how the week went. And this is a good time to do the Weekly Review. I think it would be a good idea to write some kind of assessment of the week in terms of achieving long-standing goals. I forget if this is mentioned in the GTD book; will have to review it again…