Ruby on Rails Version of The Printable CEO 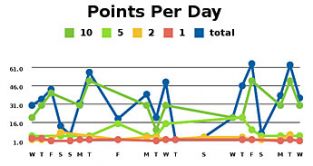 I had the pleasure of meeting Geoffrey Grosenbach at SXSW this year. He’s a cool dude with a real infectiously-positive attitude. I found out he had spent a couple years in Taiwan teaching, so we spent some time comparing notes over lunch. If I ever feel like picking up Rails, I guess I know who to bug :-)

The big news is that Geoffrey has released Rough Underbelly Task Management, which uses concepts from The Printable CEO™! Not only can you customize and enter your points, you can also graph them daily! The Rough Underbelly system even includes a timer utility. So for those of you wanting some kind of non-paper version of the PCEO, give his tool a try! It’s a completely independent venture on his part; I reserve the right to make my own implementation in the future :-)