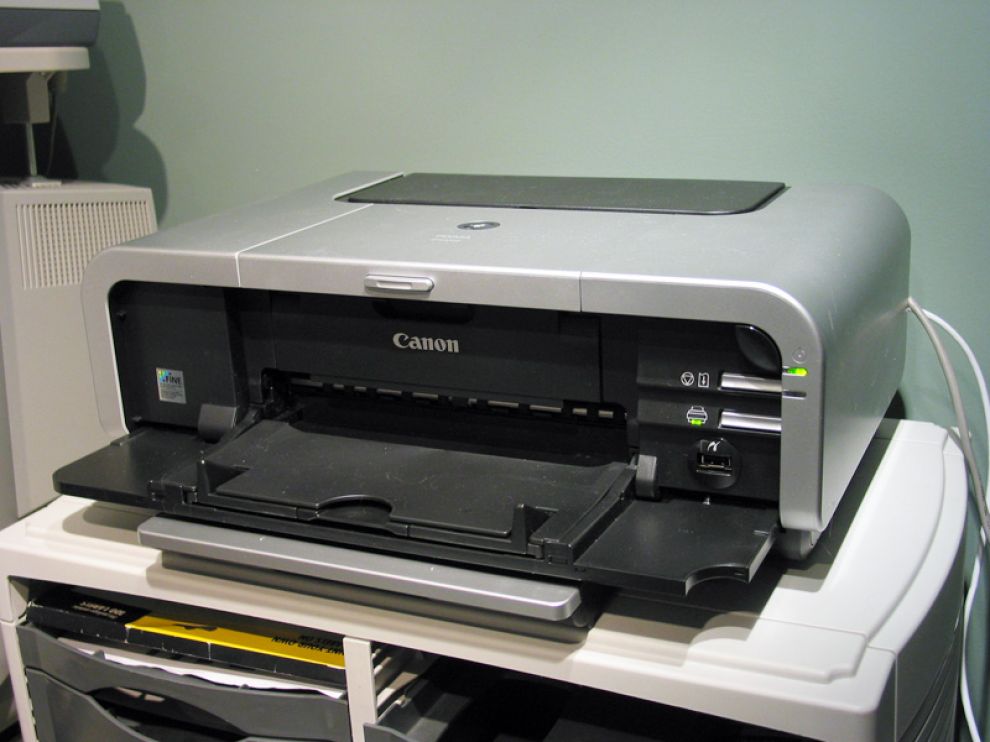 Ah, my Epson. It was a 4-color business printer with exceptional color output for its time, with pretty decent speed and reliability; it’s lasted me for 8 years, surviving five different moves without a hiccup. Sadly, its printing quality has degraded to the point where it smears everything, and no amount of cleaning would bring it back.

While Epson had been the print quality leader for much of the 90s, the gap has been eliminated in the past few years by HP and Canon’s latest models. Epson’s current offerings have left me feeling crawly with their guzzly ink usage and cheap build quality. I also was not looking for a “photo printer”, but a fast general-purpose 4-color model for daily use. HP printers I avoid on general principle (I hate their driver software), which left Canon. I had been reading good things about Canon printers for years, but they fell just short in image quality versus Epson. Until recently, that is; the recent batch of printers seems to get good buzz. The features that appeal to me:

The North American version, unfortunately, doesn’t include the direct-to-CD printing feature that the European and Japanese version of this printer. Apparently you can hack the printer to re-enable this feature on the U.S. versions if you’re willing to crack some plastic and twiddle the registry.

I first set the printer up on the Wireless Network, and it was pretty awesome. However, when I power-cycled the printer it stopped working; I suspect it has something to do with the drivers expecting the printer to be on a particular IP address; however, the printer is using DHCP and is grabbing a dynamic address every time. I’ll have to fix that. I’ve put the printer on the regular ethernet for now, and it’s working just fine. The printer also includes a regular USB 2.0 connection.

A couple of notes about the installation:

p>The print quality is quite a bit better than my 8-year-old Epson, which I suppose is to be expected given that my old 900 is 3 or 4 generations older.

The Epson output, scanned at 1200DPI. You can see the huge dots, and that the grayscale is composed of random colors. Click the image to see it bigger.

The Canon output, scanned at 1200DPI. Noticeably smoother! Grays are also printing much lighter, and there’s a hue shift.

The Epson color output, scanned at 1200DPI. You can see how the printer is smearing a lot, and that the text isn’t very sharp. The green color also shows a lot of dithering.

The Canon, by comparison, is much smoother and even. As it should be…it’s brand new!

That was all with plain paper, so it’s low resolution. Both printers were set to their best plain paper quality setting. The Epson takes several minutes to print a sheet at that setting, while the Canon takes something like 10 seconds. A vast improvement.

Normally, this printer is about $229, but Amazon was running a special for $199 plus free shipping, so I jumped on it. The IP5200R is the network-ready version. if you don’t need it, then go with the IP5200 (no ‘R’ designation). It retails for $179 or so without the networking.

I can now print from every computer in the house, which kicks ass. Now that I have a working printer again, I’m more inclined to do some more paper-based work…hooray!