Dad’s been visiting from Taiwan for about a month now, and we’ve got another month to go. I know, you’re thinking Cue the thunder! Cue the lightning! But in fact, we’re having a good time–Dad may be the best roommate I’ve ever had. In any case, it’s been good to reconnect with family. I’m observing how he does things, trying to guess which habits are Taiwanese, Japanese, or good ole’ American.

Dad’s been teaching me a lot just by example. I’m receptive to his advice after many years of, you know, not really paying attention. 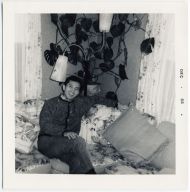 He’s been telling me a lot of stories: about his experiences coming to the United States in the late 50s, being ordained as a minister, and then serving in all-white communities. This was rather unusual at the time; he didn’t want to just be comfortable preaching in a Chinese/Taiwanese community. Not that there was a huge one anyway: immigration of Chinese was illegal from 1892 to 1943, when it was “opened” to 105 a year because pre-Communist China was one of the Allies in WWII. Dad arrived in 1957–the cap was raised in 1968.

We haven’t done much activity-wise…I’ve been busy, Dad doesn’t really like eating out or socializing. We are planning on going antiquing. He enjoys looking at old things, and is trying to find a nice oil lamp that “isn’t made in China”. He buys either American or Taiwanese whenever he can. We also have been shopping for various life-improving gadgets for his apartment back in Taichung: 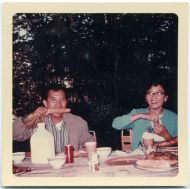 He told me some stories about Mom that I hadn’t heard before. One that stuck in my mind was this: After a long day’s work battling the administrative demons, Dad would get back home and the only time he really would have to talk to Mom would be when they were going to sleep. He reflected on how they loved to talk, and sometimes they would be lying awake giggling about something funny that had happened that day. I remember hearing that mysterious giggling, but never really thought about what they might be talking about. It reminded me of Mom and how much I miss her. Dad and I were silent for several minutes, sipping our tea and remembering.