My cousin Jason and I were bumming around Cambridge, visiting with good friend and former coworker Yuri. I’m not much of a tour guide, but Yuri knew the area well and we got a great walking tour. 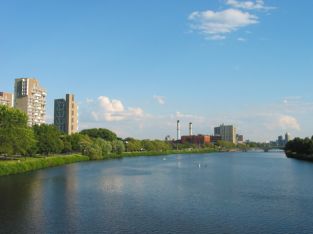 I can’t believe that after being in this area for so many years, I had never walked along the Charles River by Memorial Drive. I was a little surprised at how ratty the grass seemed by the river…I was expecting something more manicured like a golf course or a park. It was a nice place to hang out, though. 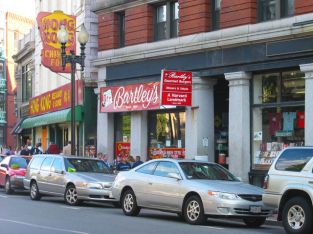 As we exited Harvard Yard, we found ourselves confronted with Mr. Bartley’s Famous Burgers, another Harvard Square landmark. We didn’t go in, but I got this shot of the place. 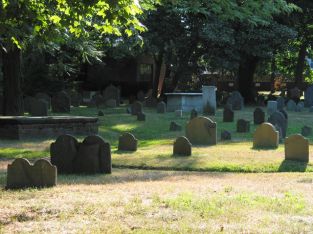 One thing that Jason had noticed about the East Coast was that our graveyards were much more authentically spooky than the rather utilitarian grounds he’d seen back home in California. This is the graveyard by that church near the Harvard Square T Stop, very old. 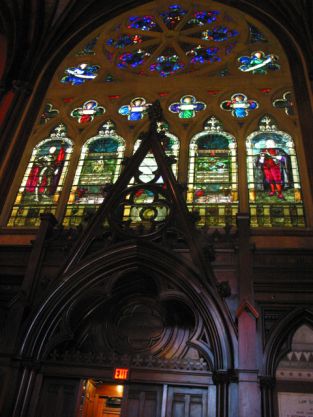 This was some kind of memorial theater near the Science Center, the name of which slips my memory. Cool windows!

This was the kind of thing that Jason doesn’t see much of in California…heavy wood, dusty-smelling old buildings. The smell brought me back to Dad’s old church in New Jersey, and of old university libraries. It was a strangely comforting smell.

We’re going to take a Duck Tour and visit Salem on Wednesday. I’ve never done the Duck Tour before, so I’m looking forward to it.