Making It in Salem, Massachusetts

I almost never do touristy things. When I lived near Orlando, Florida, I didn’t go to Disneyworld once. But my cousin is in-town and we wanted to see uniquely East Coast things, so we did a day in Boston and Salem. I wasn’t sure if I was going to have fun, but what doesn’t kill ya…

I wish I’d done this before. It was very enlightening to experience two different tourist-based businesses; it’s given me some insight in the mentality I need to have to generate recurring income. 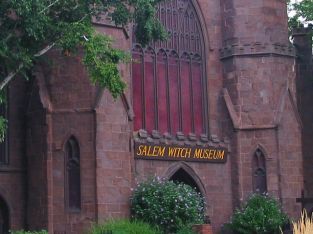 We went to the Salem Witch Museum. I wasn’t sure what to expect for our $12 bucks/person, as there were different “showings” every half hour and you couldn’t see what was going on. We booked our spot and waited in the chintzy gift shop until it was time. When the moment of reckoning burst upon us, we were ushered into a large, dark room with a glowing red circle in it. The guide suggested we gather around the circle, but everyone opted to sit on the benches. One little girl got scared and left. When we were all settled, the guide welcomed us and then…left the room! She said something like “enjoy the show!” on the way out. My mind was already appending the word suckers when the show began.

An audio tape started to play, and a somewhat Vincent Price-ish voice began setting the tone for the story: The Witch Hysteria of 1692. The room, about the size of a small barn, was basically a kind of diorama; each wall had several life-sized scenes with mannikins depicting the story of how a bunch of little girls got 19 people hanged (and one was pressed to death). The sets, though only somewhat lifelike, were nicely lit by hidden lights that faded in and out in time to the soundtrack. ; I’m guessing it was controlled by some kind of ancient audio-tape control system. I couldn’t help but think that this kind of presentation was very old…maybe this is what got Uncle Walt so hooked onto audio-animatronics? Multimedia before the dawn of computers!

After about 30 minutes, we were released into the second exhibit by a second tour guide, who walked us through the Witches: Perceptions portion of our visit. There were three main set pieces that showed different perceptions of witches, from the pre-Christian “Midwife” to “Green Skinned Devil Worshipper” to “Modern Wiccan”. The tour guide could press a button on the wall that played an audio track that spoke from the witch’s point of view.

I was not-quite disappointed by the whole experience. I later found out that this museum has remained essentially unchanged since the 70s. The takeaway: Some people built a big theatrically-lit diarama, wrote about 30 minutes of script, hired a few voice actors, synch’ed the up to a light and tape show, and have been charging people 12 bucks per head for the last 30 years. AND THEY HAVE GOTTEN AWAY WITH IT! My mind…reeling! 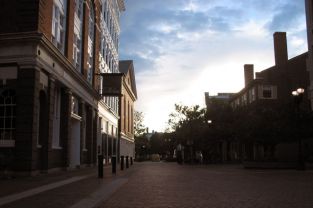 After the Witch Museum, we took a night walking tour of Salem with Hocus Pocus, an independent tour guide company. We had passed by their booth before, and I had been impressed by the front man’s friendly and non-intrusive pitch. His pleasant demeanor made me think that the tour itself would actually be pretty good…he seemed seemed invested in the business, and wasn’t just some flunky making beer money for the night. Anyway, for our 12 bucks, we got a 90 minute evening walking tour with about 25 other people, lead by a tall red-haired woman in a long black dress. It was quite enjoyable to walk the town, taking in the sights and listening to the stories. By the end of it, I felt I knew the town and its history better though I already been here several times before. My 12 bucks had been well spent.

This got me to thinking…

p>I told the guide, Susan, that I had enjoyed the tour and asked how long she’d been doing it. She apparently used to be a guide at the House of Seven Gables, and when that place had drifted in a direction she didn’t like, **she decided to start her own tour **of Salem. That was 3 years ago. Long time resident, passionate about the town history, she and her husband and son have made a business out of it. Cash only! No credit cards, please :-) Good work if you can make it happen!

And so…I am wondering how I can make this happen for me. I have been thinking that getting out of services is the way to go, but until now I really didn’t have a close-up look at how other people had done it outside of software. This is content generation at its most basic: people packaging and sharing their knowledge at a market-conscious price point**.