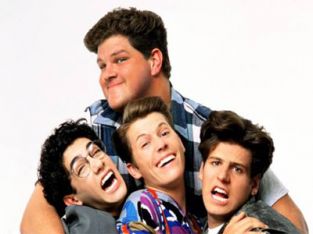 After years of searching, I’ve finally re-watched an episode of Parker Lewis Can’t Lose, one of my favorite shows from the early 1990s. Despite being in the “high school sitcom” genre, it was actually highly inventive and surrealistically funny, the spiritual ancestor of shows like Malcolm in the Middle. It’s something of a cult classic; I found an article comparing it to Ferris Bueller’s Day Off at MutantReviewers.com:

The show was peppered with playful optical effects (most notably being the “pixalating” of the screen before and after commercials), Parker’s bizarre and colorful shirts, Jerry’s bottomless trenchcoat pockets, lots of jokes, and hysterical parodies. I personally loved how the guys had a secret hideout in one of the lockers. Critics praised the show’s innovative camerawork as well as not having a laugh track. And long before “Ally McBeal” started her streak of pseudo-fantasy moments, “Parker Lewis Can’t Lose” had these in spades.

Like a lot of inventive shows, it got messed with by a nervous network (Fox) and drained of fun before being cancelled; Season One is the best.

PLCL isn’t available on DVD, so I got it through the Digital Archive Project. Apparently PLCL is available in Europe on DVD, but not here in the US (update: I may have been mistaking a homebrew DVD on a french auction site for a commercial release).