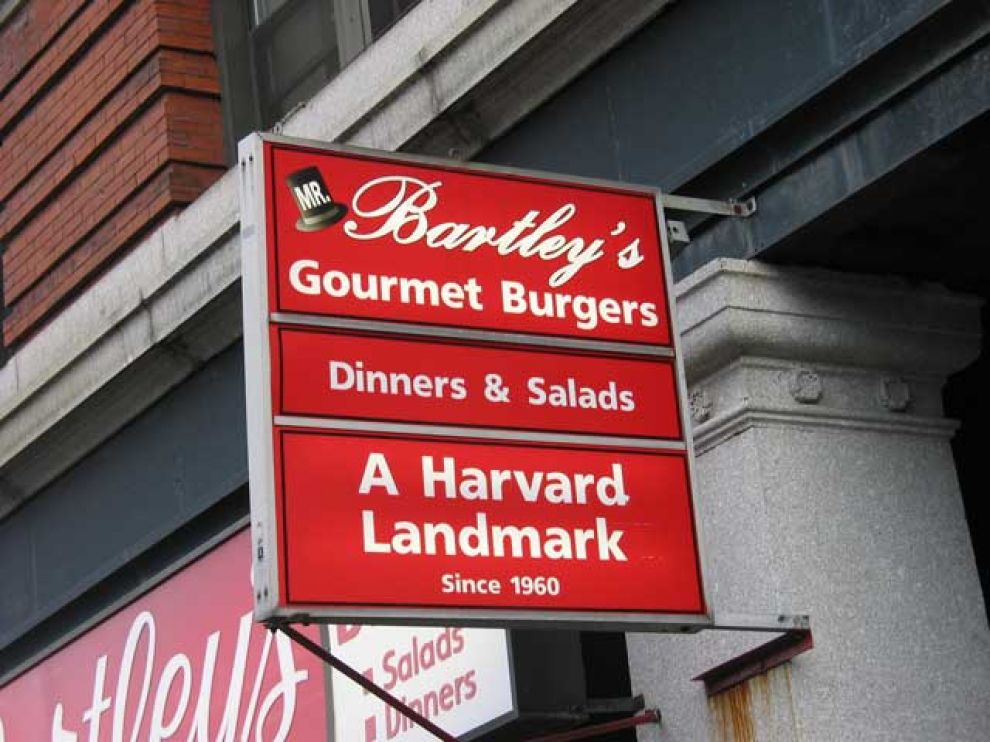 At long last, Jeff and I visited Mr. Bartley’s Burger Cottage in Harvard Square. It’s right on Mass Ave, near the Hong Kong restaurant. The rumor was that this was where you could get some of the best burgers in Boston, and possibly the best onion rings. Thus began The Burgering, Part II… 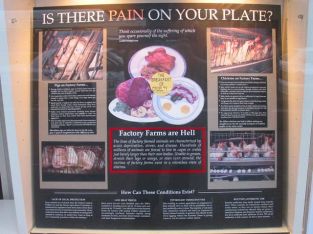 On the way to the Burger Cottage, I passed these placards that extolled the virtues of vegetarianism. Their argument was somewhat undermined by the “switching to vegetarianism is easy!” placard, which showed various substitute products for beloved American meats. Which just said to me…Americans love meat…this put me in the mood to enjoy an excellent burger experience. Meat Lovers:1! Vegetarians:0! 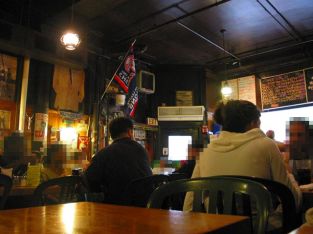 The establishment itself was a single largish room with tables crammed together. Seating was prompt and courteous. Although it was a rather muggy day, and therefore not the best weather for enjoying fried food, I gamely ordered the Deluxe Burger Platter, which came with fries and the famous onion rings. The Deluxe Burger is just a plain hamburger that costs almost 9 bucks, but I wanted to taste the unadulterated pure burger experience. Of course, I ordered rare. And for a side, I also ordered the sweet potato fries. 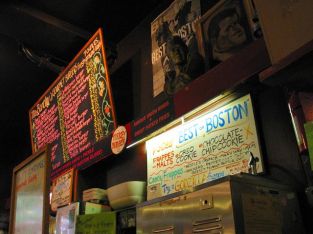 The sweet potato fries arrived quickly, and I found them pretty tasty. They were fairly chunky fries: thicker than a McD’s fry but not a wedge. I’d say they were maybe 2x the thickness of a McD’s fry. Still, I would have to say the sweet potato fries at Ryles are better if you like a crisper texture; the Bartley’s version was a little “deflated’. The regular fries were good, but nothing about them stood out in particular.

The onion rings I found disappointing. Mine were coated with a light batter that fell off the rings, and had a slight powdery taste. The batter wasn’t browned, and actually smelled a bit like raw fish. Maybe it was the oil. I might have gotten a bad batch, but I wasn’t that impressed. I like a slightly crisper, stickier batter and more caramelized onion flavor. 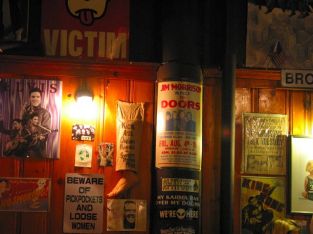 As for the burger itself: not bad. The patty was formed by hand, and had a nice char on it. It didn’t taste of wood smoke or charcoal, though, but it was competently seared. The inside was rare as I asked, and overall the burger had a good texture. Sometimes the ground meat is over-mixed and becomes kind of pasty in texture…not so with this burger, which puts it ahead of the Martha’s Exchange burger I had last night. 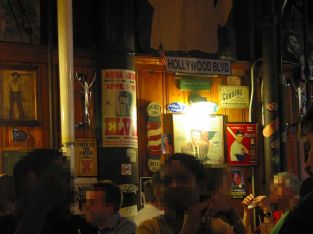 The bun had a very neutral taste. The bottom of the bun wasn’t coated with butter or mayonaise, so the juices tended to soak the bun as you ate. As I had ordered the plain hamburger, there were no fixin’s on it to detract from the pure taste of beef: juicy but unseasoned. The phrase that came to mind was that this was An Honest Burger, unpretentious and uncomplicated.

Overall, I found the experience to be a little lacking compared to the after-hours Brasserie Jo burger I had had a few weeks ago. That burger wins on the fragant toasted bun and tasteful seasoning of the charcoal-grilled hand-formed patty. It was a more memorable tasting experience.

I will go back to Bartley’s on a less muggy day and try one of their special burgers, which might be more of a fair comparison. The Quest for Great New England burgers continues!