Have you ever thought of assembling a group for a road trip & guided tour of various menu items? Most people like myself go to the Upscale Chinese American places, see some interesting dishes, but always default back to the same tired list of 3-4 regular choices.

Good idea Dave! I’m actually working with Barry on a side project to do something about this, but we’re in the way-early stages. In the meantime, let’s lay some groundwork. While my own background in things Chinese is rather Chinese-American (and therefore of suspect authenticity), perhaps this rough guide will prove useful.

Exhibit A: Menu of SICHUAN GOURMET, Side 1 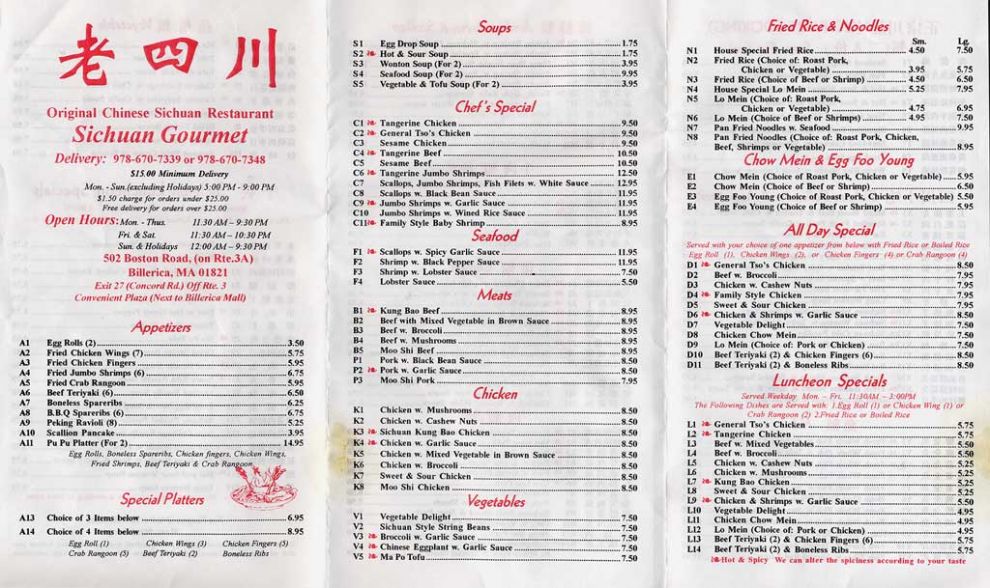 Note the menu for my favorite Chinese restaurant, Sichuan Gourmet. This is in the “Asian Outpost” category of our working taxonomy, but they crafted the menu to present the typical Chinese-American menu first. You can roughly break it down like this:

p>One thing that’s notable about the Sichuan Gourmet Side A offerings: There’s no dishes like “Happy Family” or “Three Kingdoms Delight”. An “Upscale Chinese-American Restaurant” often has things of this type…Chen Yang Li in Nashua, for example, tends to name their dishes like this. I’m not sure if these are translations of actual dish names, or perhaps they’re historical in nature. It’s part of the charm of the place, though their lack of chinese vegetables is particularly distressing, but it’s not their fault. As they once told me, “No one here will eat them except for you! Everybody just want fried rice all the time! Fried rice! Fried rice!”

Exhibit B: Menu of SICHUAN GOURMET, Side 2 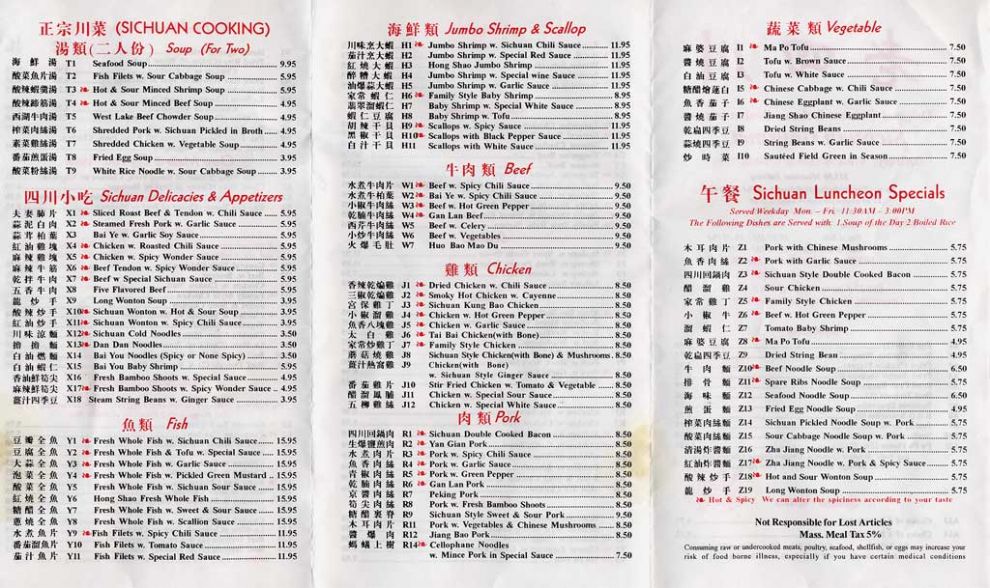 Ok, here’s the exciting part…the B-Side of the Sichuan Gourmet menu! This is what the restaurant is known for in the Chinese community: Sze-chuan Food. There are four or five major regional styles of Chinese cooking. In this country, Sze-Chuan and Cantonese seem to be the more popular. I’m fond of the Sze-Chuan and Shanghai regional varieties. I am pretty ignorant of Cantonese food, so I will have to research that. Lemi’s Barbecue in Cranston, RI is Cantonese I believe…they’re great.

Back to the menu, note that all the dishes have Chinese character names! Secondly, these are dishes that you’ve probably not seen in too many “Upscale Chinese American” establishments. This is the real stuff. I had no idea what most of it was, other than everything I’ve ordered has been very good.

Sichuan Gourmet’s authentic side of the menu doesn’t have any of these problems, of course. Every dish I’ve ordered has been pretty distinctive, flavorful, and almost never overcooked. The dishes fly right out of the kitchen, sizzling on the platter. They’re cooking over very high heat, which allows them to produce some wonderful flavors. For example, their “Chinese Cabbage w/ Chili Sauce” is absolutely amazing…the cabbage leaves are cooked over high heat that allows them to retain crispness, imparting a smoky caramel taste. It’s not swimming in juice either, so the flavors aren’t washed out. It’s deceptively simple and quite delicious.

You’ll notice also that some of the dishes have some resemblance to their Chinese-American counterparts. Sichuan Gourmet has a dish called “Old Sichuan Chicken” that looks a lot like “General Tso’s Chicken.” However, the breading is much more delicate, it’s more savory with just the hint of smoky sweetness, and it really makes you sweat. It’s a fantastic dish.

I guess my advice is to try everything. I’m not really sure what kind of tastes will freak people out. Is it the fear of eating something disgusting, as I felt when I was a kid? The scariest thing on this menu is probably the “Beef Tripe and Tendon in Chili Sauce”, but it’s not actually that bad if you don’t think about it. If you eat natural casing hotdogs with all its mystery pig snout meats, you shouldn’t balk at “Beef Tripe and Tendons”. But ok, you shouldn’t feel BAD about not wanting to eat them either :-)

Most good places will have a secret Chinese-Only menu that has the scarier stuff on it. We ask the waiter to recommend from that menu, since we usually can’t read it. Sichuan Gourmet recently put English on their specials, which is great. Try the “Meatball Sichuan Style”, also known as “Lion’s Head” elsewhere. Don’t worry, it’s not an actual head.

There are a few dishes I like to test at every new Chinese restaurant I visit. I’m not sure if they’re really great “benchmark dishes” or not, so suggestions are welcome